Biographical History: The Wyse family of Waterford have been intimately linked with the Reformation and Counter Reformation movements in Ireland and the struggle of the Catholic community for religious equality. Family tradition holds that the first Wyse came to Ireland with the Anglo-Normans and quickly established the family as one of the leading families in Waterford, owning land at Gaultier, Islandkane, Ballinacourty and Knockmahon, and holding office in both Waterford city and in the national administration at least as early as the 15th century.

The two priories dedicated to St. John the Evangelist, at Waterford and “beside the bridge of Cork”, each with an attached hospital dedicated to St. Leonard, were founded by King John before he became King, while he was Count of Mortain and Lord of Ireland, probably in 1189-98. After he had become King in 1199, he had fronted them to the Benedictine cathedral priory of Bath in England, of which they thus became dependencies. The Cork priory possessed a large landed estate, the manor of Legan, corresponding to the civil parish of Monkstown.

William, later Sir William, Wyse, the head of the Waterford family, had a successful career in the court of King Henry VIII, who gave him various grants of Irish lands, including in 1539, after the dissolution of the monasteries, the priory of St. John at Waterford with all its possessions, including those in the county and city of Cork. This grant brought to the Wyses all the archives relating to the two priories. The Cork priory was subsequently conveyed to the Ronayne family, and the lands at Monkstown to the Archdeacons. The Wyses continued to hold the Waterford priory, which became the manor of St. John’s.

In 1821 Sir Thomas Wyse married Letitia Bonaparte, a niece of the Emperor Napoleon I, and the family then became Bonaparte-Wyse.

The Wyse family continued to play a leading role in city and national politics and in the commercial and cultural life of Waterford throughout the following centuries.

In the 20th century their descendants in England believed that all the archive had been destroyed in the 18th century, except for a few late copies, but in 2011 a large collection of medieval and early modern documents relating to the Wyse family and the priories came to light in France, and were subsequently sold by auction in Dublin in February 2012. The collection was acquired by Waterford Museum of Treasures, under an arrangement that the three documents relating to Co. Cork would be transferred to the Boole Library in University College Cork.

All biographical information supplied with thanks by www.askaboutireland.ie (Bonaparte-Wyse Family entry) and Kenneth Nicholls (retired, School of History, UCC)

The material consists of 3 handwritten vellum manuscripts in Latin with seal attachments; the actual seals no longer exist. They are described in date order. All descriptions and notes have been provided, with thanks, by Kenneth Nicholls. 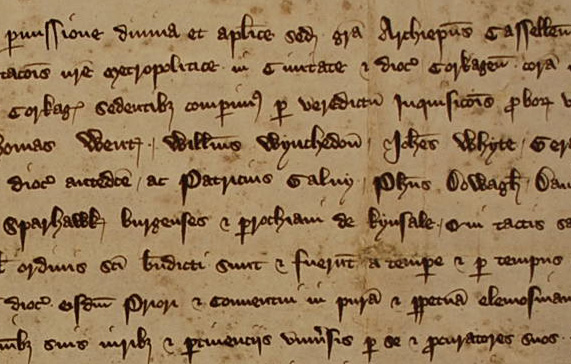