The Murphy’s Brewery archive (IE BL/BC/MB) was donated by Heineken Ireland to UCC library in 1999.

Biographical History: James J. Murphy purchased the buildings of the Cork Foundling Hospital in 1854 for £1,300. Construction of a new brewery, supervised by Gresham Wiles (Brewer) began, and Lady’s Well Brewery (Murphy’s Brewery) was established in 1856. James J. Murphy and family administered the business of the brewery, and the Murphy family had a presence in the Company until the 1960’s. By 1906, Murphy’s Brewery was Ireland’s second largest brewer (after Guinness) and had established a tied houses system (c.200 mostly around Cork city) that precluded these public houses from selling another company’s product.

In 1983, Heineken NV acquired the assets of Murphy Brewery Ireland Ltd., creating Heineken Ireland, a fully owned subsidiary of Heineken International. The company may have changed ownership, but Murphys stout continues to be brewed at its original location in the north inner city of Cork since 1856.

The records preserved in the Murphy’s Archive are an unparalleled source for the social and economic history of Cork from the mid nineteenth to the mid twentieth century. The Collection is made up of business records (legal, administrative and financial) and brewing records (brewing books, malt bins, lab. reports, etc.)

The Murphy’s Brewery material falls into three main sections – Legal, Administrative, and Brewing. The remaining sections compliment these – Charity Work, Publications, and a very small amount of memorabilia related to the Murphy Family.  Where possible original order of administrative files has been retained, but in the main an artificial order was imposed by the archivist. The workmen’s account books provide specific examples for the social historian of working hours, conditions and wages. Also the minute books record changes in the workforce with the introduction of more mechanised systems of production and the phasing out of such traditional craftsmen as coopers, farriers etc. Details of the commercial life of the city will be enhanced by studies of the various Tied Houses connected with Murphy’s. These records in particular have a strong genealogical interest for researchers. The business records comprise mainly of bound volumes include Workmen’s Account Books, Minutes of the Board of Management, General Accounts, Registers of Tied Houses, and Delivery books. Also surviving are a number of deed books and other loose papers referring to leases and agreement with publicans, financial records, shareholders correspondence and other matters. This archive records an important facet in the economic growth and development of Cork City and County and can be used by historians as a touchstone for comparison with similar industries throughout Ireland and abroad. 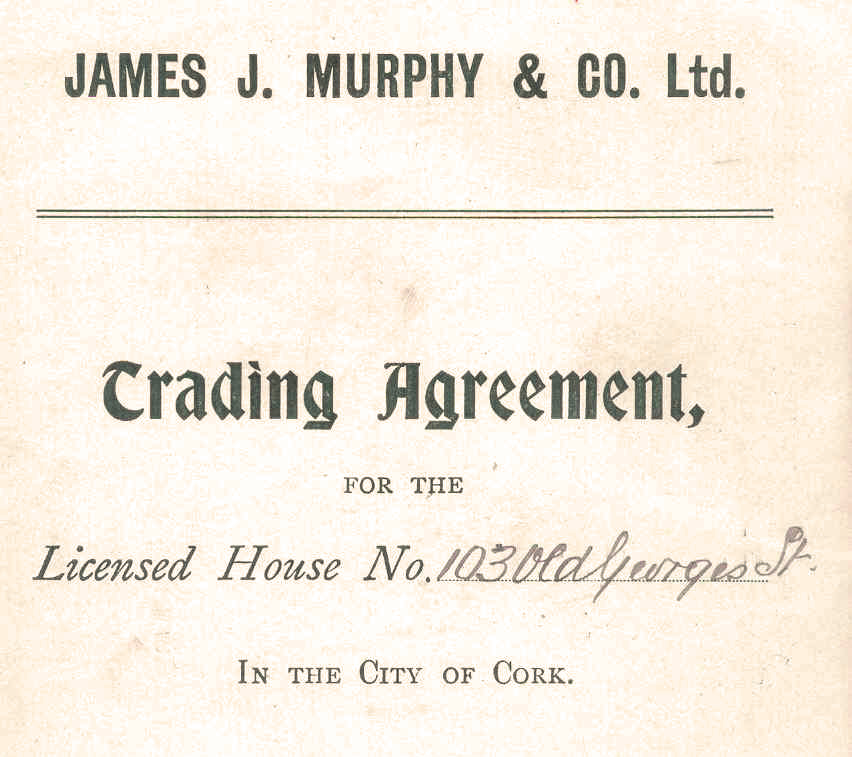