The 1916 Proclamation of the Irish Republic is the Foundation Document of Modern Irish Nationhood. It is perhaps the single most important and most iconic document in the context of Modern Irish History.

1916 PROCLAMATION OF THE IRISH REPUBLIC

The 1916 Proclamation of the Irish Republic is the Foundation Document of Modern Irish Nationhood. It is perhaps the single most important and most iconic document in the context of Modern Irish History.

It was printed at Liberty Hall, Dublin on Easter Sunday, 1916, and read from the steps of the General Post Office, O’Connell St., Dublin on Easter Monday morning by Pádraig Pearse, in the presence of the other signatories of the document, thereby heralding the Easter Rising, and Ireland's advance towards self-determination.

It was probably composed by Pádraig Pearse, with some changes and amendments by James Connolly and Thomas MacDonagh.

It is single broadsheet, approximately 76cm x 49cm, and there are no more than 50-60 original copies in existence with approximately 30 of these in public institutions.

So authentic copies of 1916 Proclamation, which is essentially the Irish Declaration of Independence, are exceptionally rare. 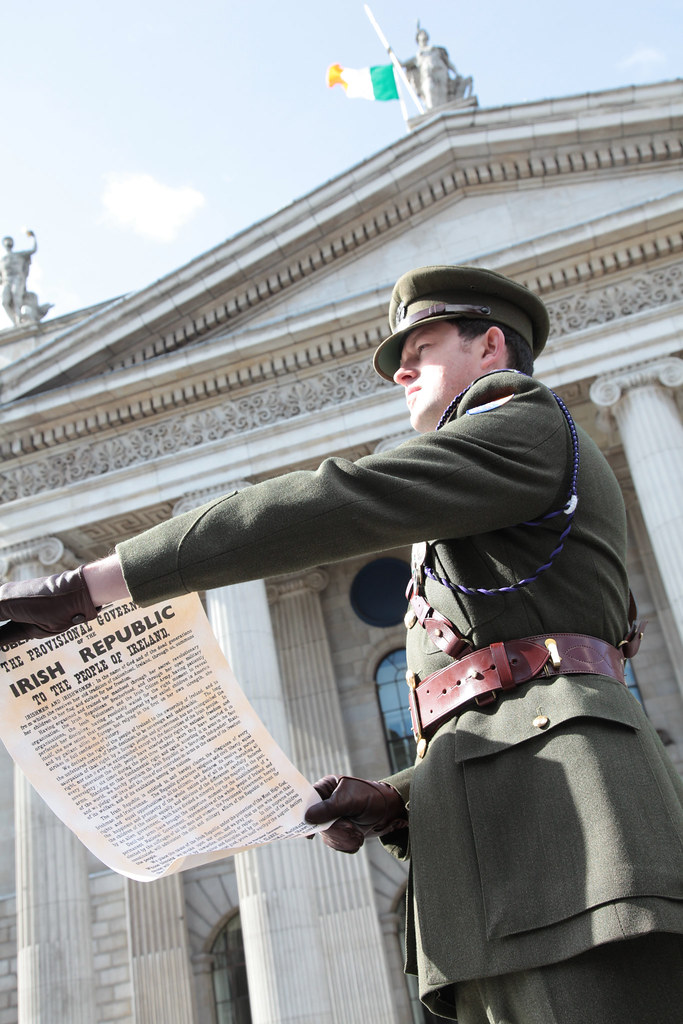 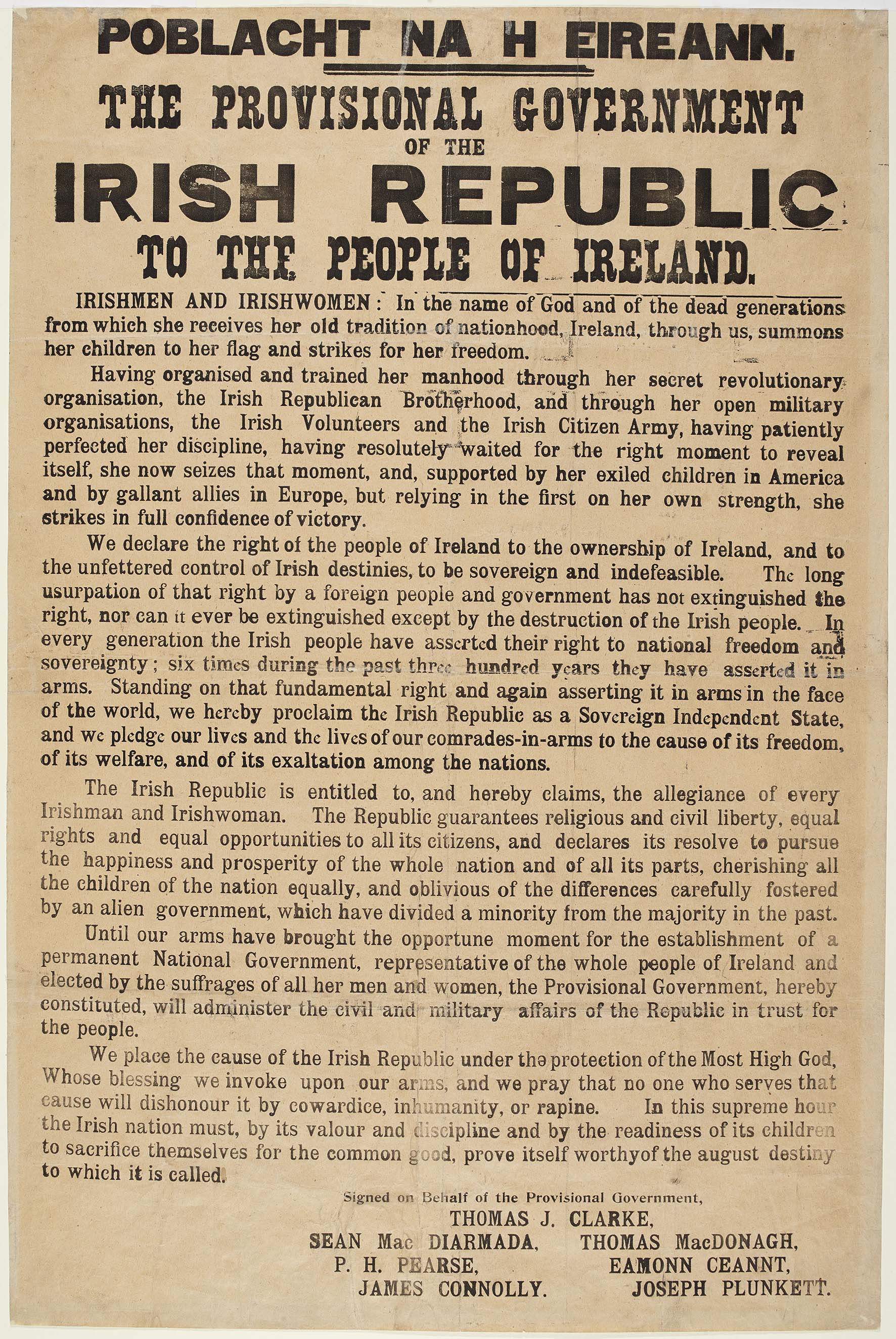 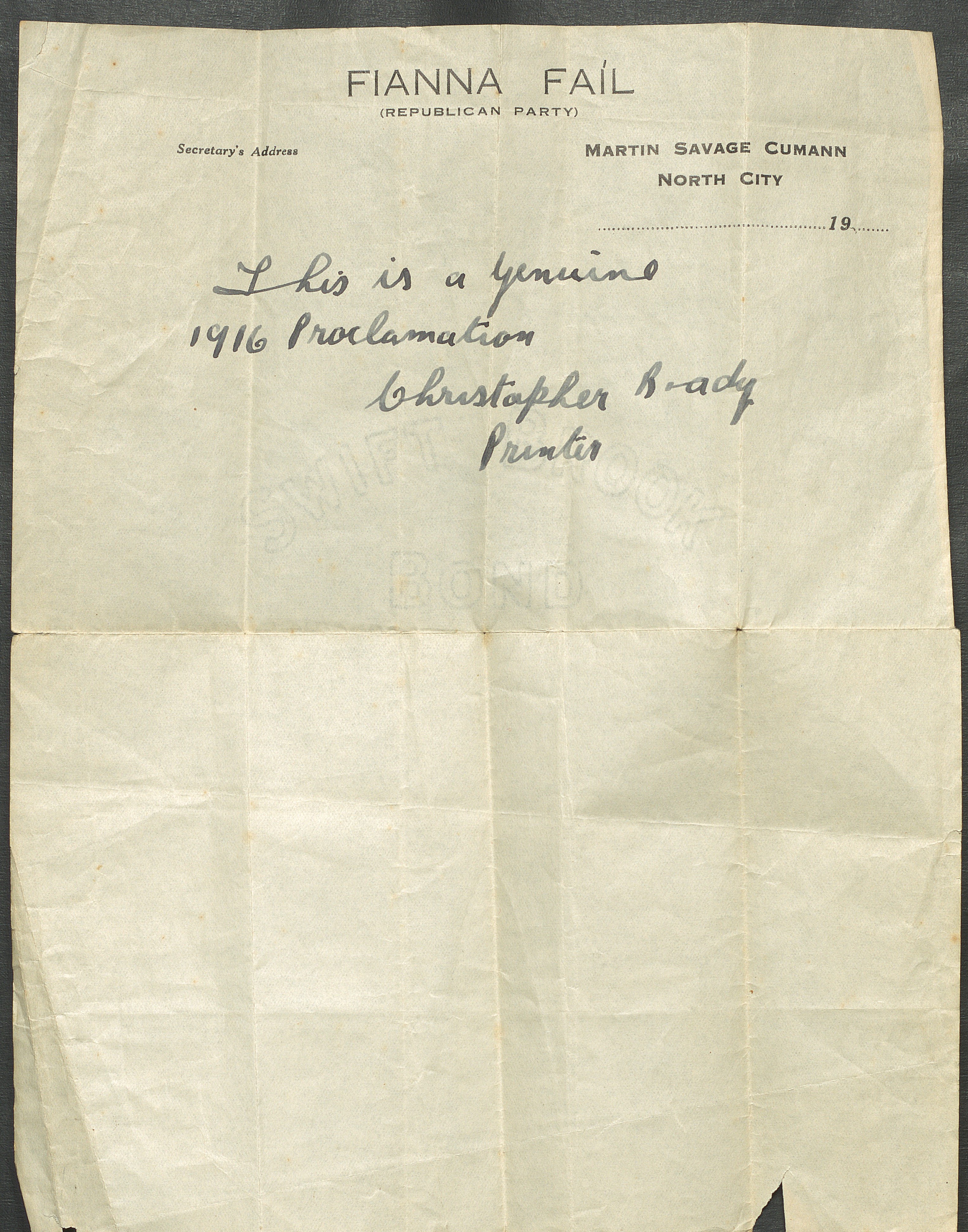 A print run of 2500 copies was planned, with the intention of supplying the country as well as the city. Because of the difficulties encountered in the printing process it is likely that no more than 1000 copies were in fact printed.

It was printed on an old Wharfdale Double-Crown, printing machine. The work commenced about mid-day on Sunday 23rd April and was completed approx. 1.00am on Easter Monday morning. James Connolly organised all arrangements.

The printer was Christopher Brady and the compositors Michael Molloy, and Liam O’Brien all of whom had previously been employed in the work of printing The Workers Republic, for Connolly.

Brady who worked the machine throughout described his task as one of great difficulty. He found it hard to ink the type evenly and the rollers refused to maintain an even pressure, with the result that nearly all copies show much smudging in parts and faint printing in other parts.

In the beginning an attempt was made to set the entire document at the one time, but it was found this was not viable as there was not enough type available, and it had to be set in two stages:

Firstly, the top half, from “Poblacht” down to and including the words... “among the nations”.

Secondly, the bottom half, from “The Irish Republic, .. to Joseph Plunkett.”

The type for the second section or bottom half was still in the press, when the British soldiers entered Liberty Hall, on Thursday 27th April 1916.

There are six main points from which the first issue of the Proclamation can be identified:

The UCC copy conforms in size and type of paper, and also contains all the typographical inexactitudes and irregularities called for.

This copy also displays clearly that the original Proclamation was in fact printed in two parts, as the distance between the last two paragraphs, etc., and the top half again varies in size.

The UCC copy has excellent provenance. It belonged to Richard Gogan T.D. Gogan came from a strongly republican family joining the volunteers at the age of 14, and was reputedly the youngest member of the General Post Office garrison during the 1916 Rising.

He attended to James Connolly after he was wounded, and was one of the stretcher-bearers for Connolly when the G.P.O. was evacuated. Gogan was later a founder member of Fianna Fáil, and was T.D. for Dublin North West from 1954-1977. He died in 1982. This copy of the Proclamation was his proudest possession. It is understood that he brought it with him from the GPO.

The printer Christopher Brady examined this copy in approximately 1940 and confirmed it as an authentic original example printed by him on Easter Sunday 1916.

The Proclamation will be on display in the Glucksman Gallery, UCC from Tuesday 7th to Sunday 12th June. 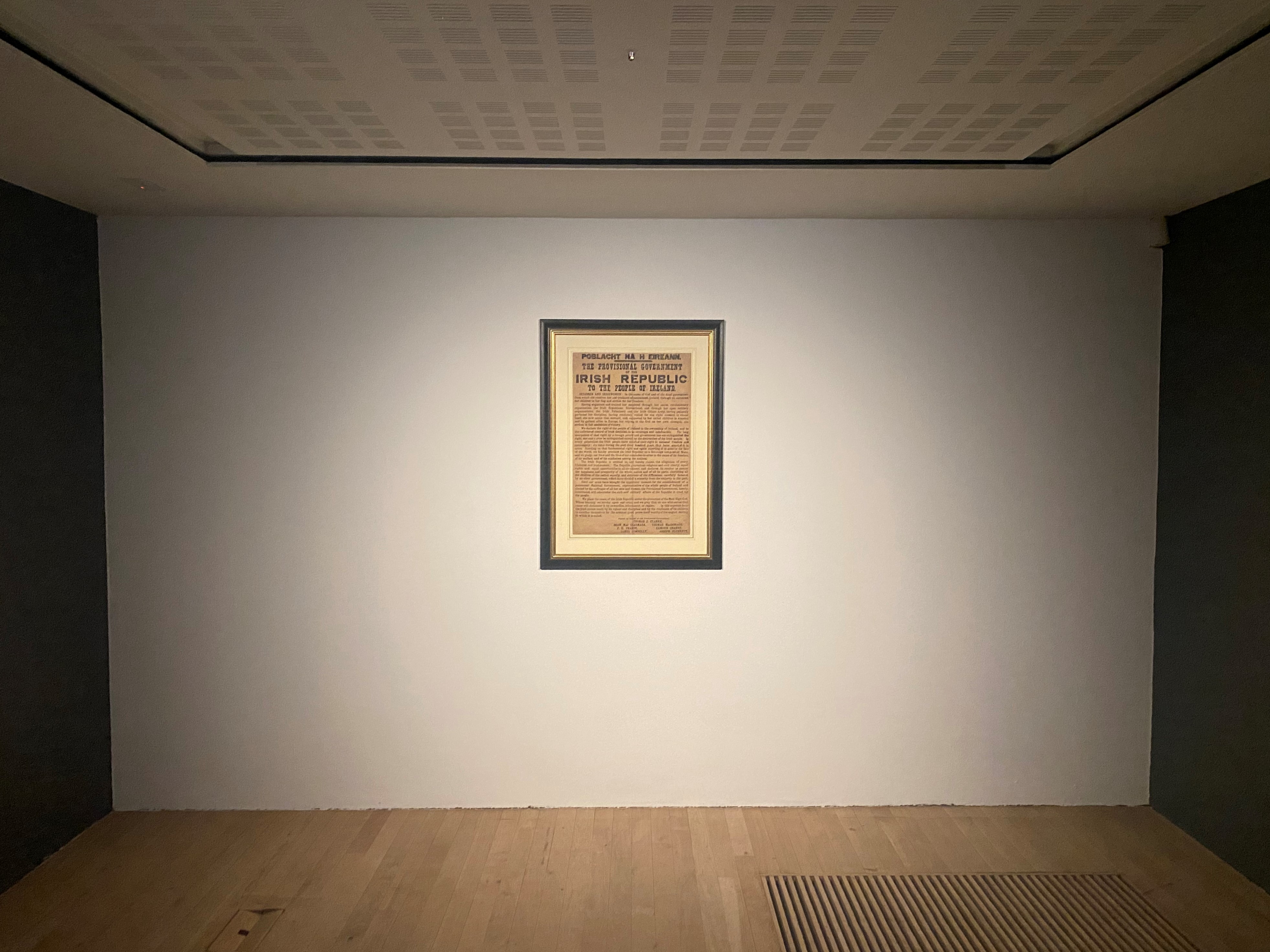