Collection Ref.:              IE BL/EP/E/M
Title:                             Earbery Estate Maps Collection
Dates:                             1734 - 1819
Level of description:     Item
Extent:                           39 items
Administrative History:
The Earbery Estate Maps Collection was acquired by UCC Library from FM Auctioneers in March 2020.
Biographical History:
In 1703 Matthias Earbery of Ballincollig purchased the lands of Caherbaroule in East Muskerry from the Forfeited Estates Commission; he also rented lands in the parish of Donoughmore and lived locally at Shandangan. On his death in 1729 he was succeeded by his son Christopher, who died in 1762. His son Matthias II married in 1758 Elizabeth Barbara, only child of Major Henry Crofton; he was MP for the borough of Lanesborough, and acquired a small estate at Inchinappa in Co. Wicklow, where he died in 1779. He was succeeded by his son Christopher Henry, who died in 1818 leaving as his heirs his daughters Emily Rebecca and Marcia Anastasia. The latter married the Rev. Henry William Crofton and died without issue before 1840; her husband succeeded to the estates, and the line was continued through Crofton's second marriage.
Information taken from FM Auctioneers brochure
According to the NUIG Landed Estates Database Earbery Estate entry, Marcia Anastasia Earbery was the youngest daughter of Matthias II (Mathew) Earbery, his co-heir, and did indeed marry the Rev. Henry William Crofton, with the Earbery estates passing to the Crofton family from this marriage.

The earliest maps are those surveyed for Christopher Earbery in 1734 (BL/EP/E/M/1) and Matthias II ("Mathew", BL/EP/E/M/2) in 1762; the majority date from the 1790s and early 1800s and were surveyed for Christopher Henry Earbery. There are two very rough maps that are undated. The areas surveyed include Gurrane Redmond, Cahirbarule, Knockarouke/Knuckarourk, Gowlane/Goulane, Lackubane/Lackabawn, and others. The maps generally cover specific areas indicating holdings of individual tenant farmers. The surveyors included Timothy Dilloherry, Patrick Ahern, Daniel Mahony, George Miller, D. Vaughan, [P] D. [Marmion], Michael Fitzgerald. If a surveyor is named on a map, it is noted on its entry in the listing.

The largest and most detailed item is a printed map of five townlands in Donoughmore parish (BL/EP/E/M/37) by Cork surveyor Michael FitzGerald, made for Misses Emily Rebecca and Marcia Anastatia Earbery in 1819 soon after they inherited the estate. It gives the tenant and acreage of every field, marks houses and topographical features.

The maps/plans/surveys are described in date order from earliest to latest. The lands mapped are noted either as the official "title" given by the surveyor or as the area surveyed mentioned in the 'subject' entry. The spelling of lands does change slightly over the centuries e.g. Gowlane/Goulane. The scale provided is from the surveyor, some given as perches, others as chains, per inch. Most maps are paper format but there are a small number produced on vellum. The inks and watercolours remain vibrant given their age and having been stored rolled may have contributed to this. 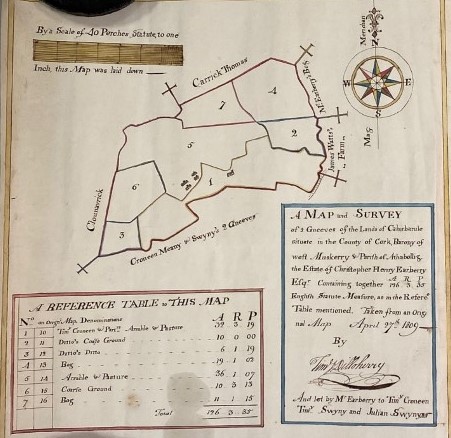