The Kathleen Boland Archive, compiled by her daughter Fionnuala Crowley, was owned by a family trust who have now very generously gifted the collection to University College Cork.

Kathleen Boland (known informally as ‘Kit’ by her family) was born in Dublin on 19 July 1889 to James and Catherine ‘Kate’ Boland (neé Woods). Her parents both came from Irish families with strong Irish Nationalist backgrounds in Manchester. According to Boland herself, a relative of her mother Kate was dragged and whipped through the town of Carlingford for supplying rebels with pikes during the 1798 Rebellion, and her father was a committed Fenian who was active in Manchester and later Dublin. James Boland’s close links with the ‘Invincibles,’ a splinter group of the IRB [Irish Republican Brotherhood] forced him to flee to New York after the 1882 Phoenix Park murders. Their eldest daughter, Nellie, was born in New York City as a result. They later returned from the United States, firstly to Manchester, where their son Gerald was born, and finally back to Dublin, where their children Harry, Kathleen and Edmund were born. Nellie Boland would die from a TB related illness in 1898, in Manchester. Following James Boland’s death in 1895 from a head injury sustained during a fight at a public meeting held by politician Charles Stewart Parnell, the newly widowed Kate Boland and her children were saved from financial destitution after funds from public subscriptions were used to purchase a tobacconist’s store for the family at 28 Wexford Street in Dublin. Soon after, the family would move to 15 Marino Crescent, Clontarf.

The Boland children grew up to become active participants in the struggle for Irish independence. Gerald and Harry both joined the Irish Republican Brotherhood and the Irish Volunteers in 1904 and 1913, respectively. Kathleen was involved in the storage of guns obtained during the gunrunning at Howth in 1914. In 1916, Kathleen and her brothers took part in the Easter Rising; with Gerald fighting in Jacobs’ Mill and Edmund in the GPO [General Post Office] on Sackville Street [now O’Connell Street] and the Imperial Hotel. Harry and Kathleen at were initially based in Gilbey’s Stores in Fairview. She was involved in collecting ammunition but was later ordered by her brother to return to the family home in Clontarf. Harry served in the GPO later in the week. In the aftermath of the Rising, both Kathleen and Edmund escaped imprisonment; Gerald was interned in Frongoch Internment Camp in Wales, while Harry received a death sentence for his role in the uprising. This was later commuted to five years penal servitude. During his transfer from Lewes to Maidstone Prison in 1917, Harry hastily wrote a letter addressed to his mother detailing the treatment of the Republican prisoners. The letter was retrieved on the street by an unidentified woman who duly posted it to Harry’s mother in Clontarf. Kathleen in turn brought the letter to Michael Collins at the National Aid office in Exchequer Street. A subsequent demonstration organised in Dublin to protest the treatment of the prisoners contributed to their release in June 1917.

After the Rising, Kathleen became an active member of Cumann na mBan, where she was initially involved with drilling, first aid and the care of arms. Following the release of her brothers from prison, 15 Marino Crescent became a safehouse for the IRA [Irish Republican Army] and was used to store documents, arms, and money. As such, Kathleen and her mother were subjected to continuous raids from Crown Forces which would intensify during the War of Independence. She also worked in her brother Harry’s tailoring store in 64 Middle Abbey Street during his time as a Special Envoy to the United States. The store was a depot for IRA despatches and later used to house arms and explosives. She also kept the Russian crown jewels, obtained as collateral against a loan given by the Irish Republic to the fledgling Russian government on behalf of her brother Harry, at the family home. The jewels were eventually handed over to the Irish Government in 1938. She was also charged with minding the key used in the escape of Éamon de Valera from Lincoln Jail in 1919 at the request of Harry. Boland would later reluctantly relinquish her possession of the key to Peter deLoughry after the intervention of Éamon de Valera. Issues surrounding the ownership of the key would later become the source of tense exchanges between de Loughry’s sister and Boland in the late 1930s.

The Boland family vehemently opposed the Anglo-Irish Treaty. At the breakout of the Civil War, they were firmly aligned with the Anti-Treaty IRA. As such, Kathleen’s brother Gerald was captured by Free State Forces in July 1922 and imprisoned in Mountjoy Gaol. Her brother Harry was shot after a raid in the Skerries Grand Hotel on 1 August 1922. Kathleen visited him as he lay dying from his injuries in St. Vincent’s Hospital, where he refused to identify his attacker. She later stated he did this to avoid future reprisals, although he did mention that they were once imprisoned together in England. Following Harry’s death, Kathleen undertook an extensive fourteen-month tour in North America with Hanna Sheehy Skeffington, with the aim of obtaining both financial and public support for the Prisoners’ Dependents’ Fund, at the suggestion of Mary F. McWhorter, President of the Chicago Branch of the Ladies’ Auxiliary of the Ancient Order of Hibernians.

Boland married Seán O’Donovan [born John James O’Donovan in Clonakilty, Co. Cork] in Manchester on 12 December 1923, following his release from prison and her return from the United States. O’Donovan was from a similar Irish nationalist background and with his brothers Con and Peter, fought in the 1916 Rising, War of Independence and the Civil War on the Anti-Treaty side. He was a noted GAA [Gaelic Athletic Association] player for UCD Collegians, before working as Chief Veterinarian Officer for Dublin Corporation and later, a Fianna Fáil Senator. O’Donovan was involved in the establishment of the Fianna Fáil political party in 1926 and would eventually serve as President of Dublin North-Central Comhairle Ceanntair. He was also a close associate of many Fianna Fáil politicians, including her brother Gerald and, most notably, its leader Éamon de Valera. They had four children: Henry [Harry], Seán, Eileen and Fionnuala. In later life, Boland was involved with fundraising for the Benevolent Fund of the Old Cumann na mBan and the Local Defence Forces Fund.

This is a collection of letters and photographs and memorabilia, spanning 100 years from the late nineteenth century to the 1970’s giving a unique insight into a family connected in many ways with the foundation of the State. Some of the early documents paint a picture of life in various British and Irish Jails and elucidate some of de Valera’s and Sinn Fein’s strategy at the time.

The Boland Collection offers a rich assortment of cultural and political material which will greatly benefit a new generation of researchers. The collection is comprised of material collected by Kathleen Boland, including a number of items associated with her late brother, the senior republican political leader, Harry Boland. Much of the collection connects to Revolutionary Ireland, with additional material extending into the Fianna Fail world of the 1930s to the 1960s. 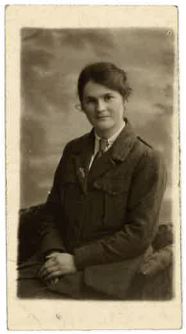