Collection Ref.:             IE BL/PC/MOB
Title:                            Michael O'Brien (Fenian) Collection
Dates:                           14 Nov 1867
Level of description:    Item
Extent:                          1 item
Administrative History:
IE BL/PC/MOB is the Michael O'Brien (Fenian) Collection held in UCC Library. This material was previously in the possession of Micheál Cranitch (1912-1999) of Rathduff, Co. Cork. He was a National School Teacher, member of the Seanad and served as Cathaoirleach from January to June 1973. He also was a sportsman, musician and had a keen interest in the Irish language. This item was donated to UCC Library in 2014 by Peadar Cranitch (son of Micheál Cranitch).
Biographical History:
Michael O’Brien (1837-67) was an American Civil War veteran, Fenian and Manchester Martyr born in Ballymacoda, Co. Cork. He was one eight children whose family were evicted from a farm on the estate of the Earl of Shannon in 1856.  Michael worked in the Drapery profession until he lost his job in December 1961. He was sworn into the Irish Republican Brotherhood (IRB) c.1858-59. In c.May 1862 O’Brien went to America and in July 1863 joined the 13th New Jersey Regiment and he later served with the 10th Ohio Regiment which also included fellow Fenians Ricard O’Sullivan Burke and Thomas J. Kelly. By 1865, he had attained the rank of Lieutenant and US citizenship. He returned to Ireland in 1865 and found work in a shop in Cork city. O’Brien started working with his fellow Fenian and veteran of the American Civil War, Col. Ricard O’Sullivan Burke and during 1866, he travelled back and forth from England obtaining arms for the Fenians in Ireland and England. For the next 2 years he was involved in various Fenian activities in Ireland and England. He was one of the main people involved in the plan to rescue two Fenians, Timothy Deasy and Thomas J. Kelly from the police van which was transporting both men to Belle Vue Gaol, Manchester, on 18th September. Police Sergeant Charles Brett was killed in the attack. Michael O’Brien along with William Philip Allen, Michael Larkin and O’Meagher Condon were all arrested as they fled the scene, charged with murder. Before the trial, O’Brien sought help from the American Consul claiming that he was an American citizen and should not be tried in an English Court. On 20 November 1867 they were all found guilty and sentenced to death by hanging. O’Brien made a speech on hearing the verdict of his conviction in which he criticised the US government for its failure to protect him from an unjust trial. He strenuously denied the charges and claimed that he had been improperly identified while in custody. Thomas Maguire was pardoned and Edward O’ Meagher Condon‘s sentence was commuted. Allen, Larkin and O’Brien were all hanged on 23rd November 1867 outside Salford prison.
Content:

A photocopy of the last letter written by Michael O’Brien (Fenian and Manchester Martyr) in New Bailey Prison, Salford, Manchester, England to his brother. The letter, written nine days before his death, documents the thoughts and beliefs of an Irish Fenian prisoner sentenced to death. 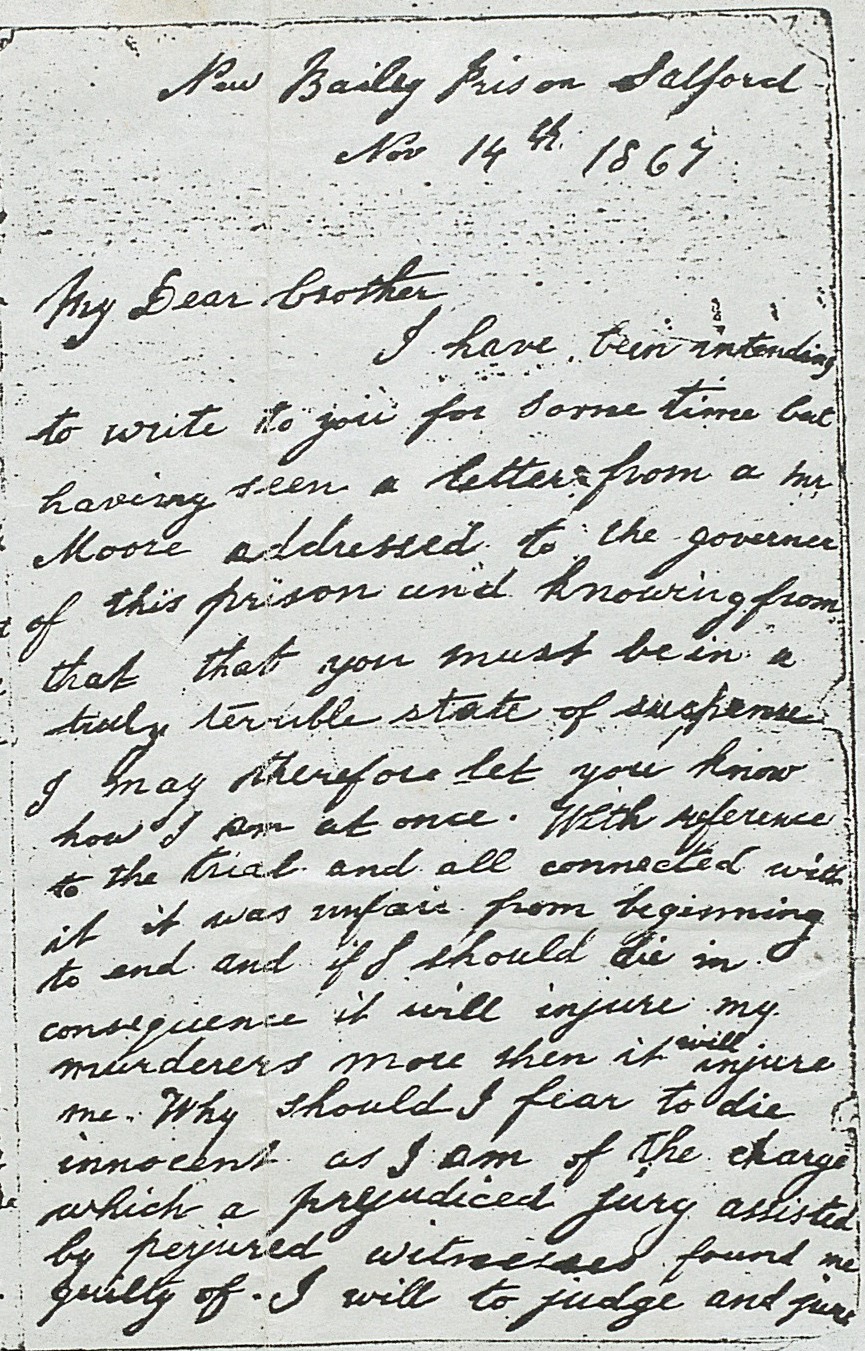