The Nancy McCarthy Collection (IE BL/PP/NMC) was donated to UCC Library in 1998 by Harriet O’Donovan-Sheehy, widow of the Cork born writer Frank O’Connor and Executrix of Nancy McCarthy’s estate.

Biographical History: Anna Patricia (Nancy) McCarthy was born in 1902 to Charles and Annie McCarthy, one of ten children, three girls and seven boys. Her father owned a plumber’s shop in Emmet Place, Cork city, and was by all accounts a successful businessman. Along with her sisters Nancy was a boarder at the Brigidine Convent, Mountrath, Co. Laois. After qualifying as a Chemist she went to work for a number of chemists, e.g. Boots in Birmingham, England. She moved back to Cork city to work in Blair’s Chemist, Patrick Street, Cork, in [1926] and later, in a move unusual for a single woman at that time, opened her own chemist shop in Douglas in 1946. She retired in 1986, and died in October 1988, aged 86.  Throughout her life Nancy played an active and influential role in the cultural life of Cork city. As a young amateur actress she performed with the Cork Drama League, meeting there the writer Frank O’Connor (then known as Michael O’Donovan) with whom she had a romantic relationship and long standing friendship. Through O’Connor Nancy met many of the artistic and literary figures of her day and as her correspondence reveals, became a friend and confident to many. Her love of rural Ireland and the Irish language led her to spend many holidays in the Cork/Kerry Gaeltacht where she became one of the circle gathered around the fireside of the Tailor and Antsy in Gougane Barra. In later life, she was a committee member of the Cork Orchestral Society, and an enthusiastic follower of the Cork Ballet Company and the Cork Film Festival.

The Nancy McCarthy collection naturally falls into three parts – personal material relating to her many friendships, her marriage and her early theatre pursuits; her professional career as Chemist and business woman; and finally photographs and writings which illuminate her remarkable life.

Nancy McCarthy was a well-practised letter-writer, with her correspondence spans eighty years. In Section A. Personal this is illustrated by the volume of letters in the collection, especially the correspondence with Michael (aka Frank O’Connor) and Harriet O’Donovan. Nancy’s interest in the arts is in evidenced by the people she corresponded with – Eric Cross (Author), Cyril Cusack (Actor), Mícheál Mac Laimmoir (Actor), Frederick May (Composer), William Maxwell (editor of The New Yorker when O’Connor contributed to the magazine), and Seamus Murphy (Sculptor).

Some letters exist relating to her family, of particular interest are letters and postcards written by her Uncle, George Roche, from the Western Front during World War I, and letters from her brother, Earl McCarthy, to Michael O’Donovan.

Also preserved in this section are personal diaries; material related to her marriage late in life to an American, Berry Allitt; memorabilia (also from the McCarthy family) and material relating to her funeral. Harriet O’Donovan-Sheehy was responsible for organising Nancy’s wishes – to scatter her ashes off Dunquin, Co. Kerry, a ceremony that was referred to as “the Scattering”. To mark Nancy’s passing, there was a special commemorative publication of The Cork Review in 1990. (BL/P/NMC/689)

Section B holds material from the Cork Drama League, founded in 1927 by Frank O’Connor, Sean Hendrick, and Sean and Geraldine Neeson, with John J. Horgan as Chairman. They preformed plays by Ibsen and Chekov, as well as original works by local Cork writers including Daniel Corkery. Nancy McCarthy was one of the leading actresses, and received positive reviews for her roles. The collection features a unique scrap-book of newspaper reviews, programmes, tickets, etc. from the Drama League.

Nancy was also a friend and frequent visitor to Timothy Buckley and his wife – “the Tailor and Ansty” in Ballingeary, Co. Cork. They came to national prominence when the book by Eric Cross based on their lives was banned. In Section C. the Tailor and Ansty, one can read letters from the Buckleys to Nancy, photographs of her visits to Ballingeary, and material related to the play based on the novel in 1968, and a television documentary on the subject made by Radio Telefís Éireann in 1978.

The second part of the collection relates to Nancy McCarthy, the Chemist and business woman. Section D. Professional Life divides into her early career where she worked in England and various parts of Ireland, on to her self-employment when she opened her own chemist shop in Douglas, Co. Cork.

Section E. Pictorial and Printed Material consists in the main of photographs, in albums and loose. They show the young Nancy at home with her family in their various homes and with friends in different parts of Ireland, England and Europe. Some interesting items are artwork by A.E. and a draft of a Frank O’Connor piece The Goldfish. 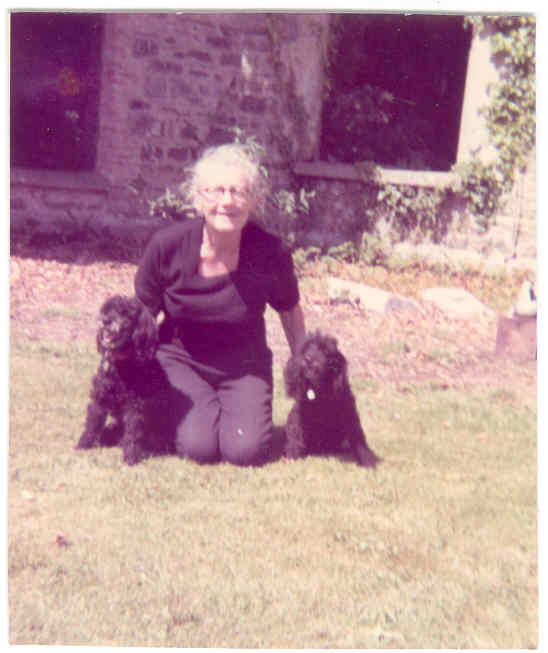