Samuel Joseph Fahey (1885-1939) was a Teacher, an active member of the revolutionary movement in Ireland and a Gaelic Scholar. He was born in Glenatallan, Kilconickny, Loughrea, Co. Galway in 1885. He was a brother of Francis (“Frank”) Fahey, Ceann Comhairle (Chairperson of Dáil Éireann, the lower house of the Oireachtas (parliament) of Ireland), 1932-1951. He attended the primary school where his father John was a teacher in Kilchreest, Co. Galway. Between 1900 –1904 he was educated at Mungret College, Limerick. He received a BA Degree from the Royal University, Galway (today NUIG). In 1911 he was teaching in St. Muredach’s College, Ballina. In 1912 he married Alice Molloy in Ballina. Both Samuel and his brother Francis fought in the 1916 Rising. In 1918 he was teaching at The Monastery School, Tipperary which was later transferred to the Abbey School, Tipperary. On 3rd March 1919 Samuel Fahey was ordered to reside outside the province of Munster, King’s county (Co. Offaly) and Queen’s county (Co. Laois) and county Kilkenny. Fahey disobeyed the order and was tried under court martial and sentenced to imprisonment for fifty-six days. The Prison Register for Cork prison of 12th April 1919 records his home address as James St., Tipperary and his occupation as that of a teacher. He was also interned for some time in England. He taught in several schools before joining the staff of Blackrock College, in Dublin. Samuel Fahey died on 2nd February 1939 in Dublin.

Pádraig Ó Mathúna (1925-2019) was a native of Cashel, Co. Tipperary, a Pharmacist, Silversmith and Goldsmith. While studying Pharmacy in Dublin, he also self-taught himself silversmithing by closely studying metal work in the National Museum of Ireland. His work can be seen in the National Museum and forms part of the Vatican Collection. Retired in later years to Dingle, Co. Kerry.

The collection principally contains a handwritten letter from Samuel J. Fahey, Prisoner No. 121 in His Majesty’s Prison, in Cork, to Michael Whelan, giving an insight into the thoughts and experiences of a Republican prisoner with reference to his family, pupils and his patriotism. The accompanying note from Pádraig Ó Mathúna includes background and biographical information to the letter. 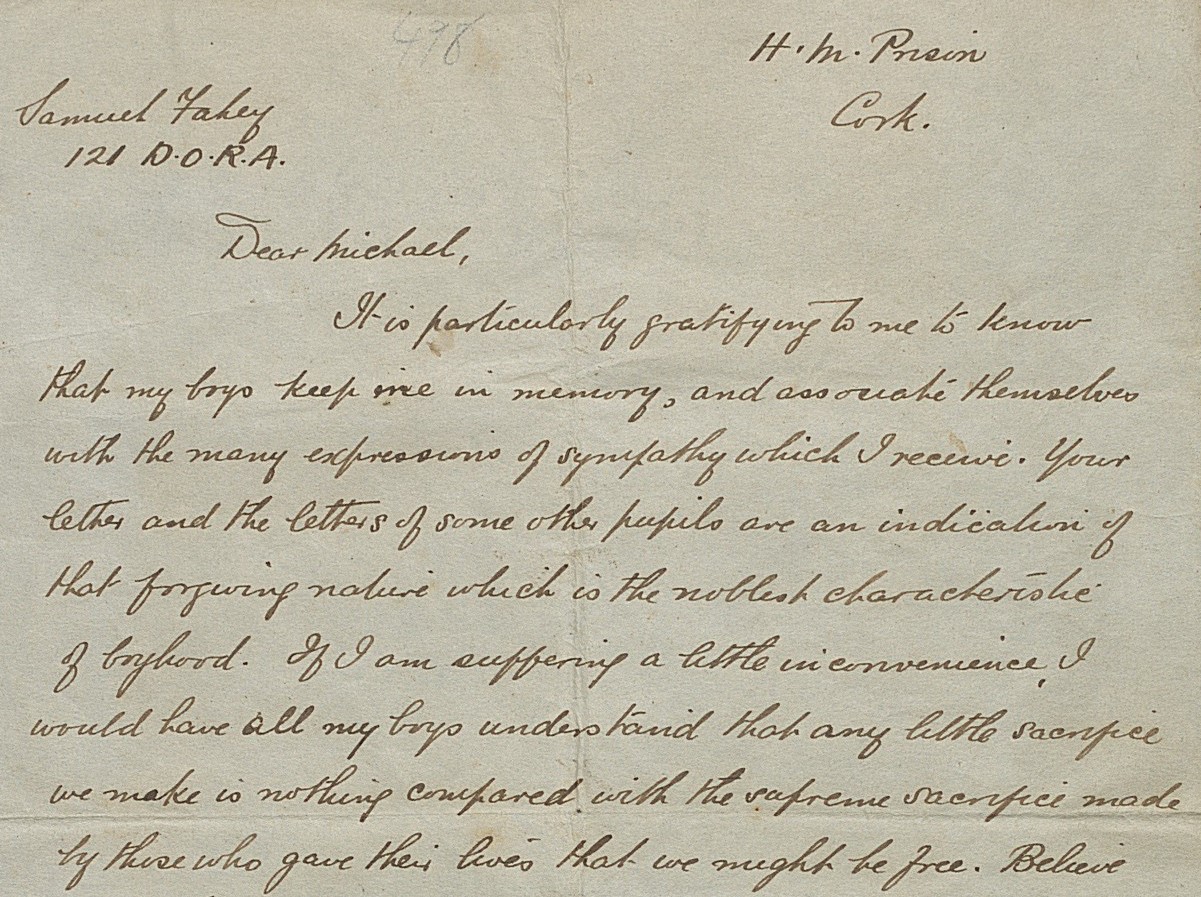