The Papers of Daniel Corkery: Home

UC/DC are the papers of Daniel Corkery (Dónal Ó Corcora) lodged in the Boole Library, U.C.C.  They were deposited after Corkery's death by his nephew Bill Corkery and niece, Maureen Corkery. When they arrived at U.C.C. the Corkery papers were in a highly disorganised state and were subsequently boxed by the library staff.  The original order having been lost, an artificial order (except in the case of the letters) was imposed by the archivist.

Daniel Corkery (Ó Corcora, Domhnall) (1878–1964) was a writer, cultural philosopher, and literary critic, was born 14 February 1878 at Gardiner's Hill, Cork city, one of five children of William Corkery and Mary Corkery (née Barron). He was largely self-taught. He never married and spent his whole life in the Cork area.

He was educated at the Presentation Brothers' South Monastery school and became a monitor, going on to do a year's teacher training at St Patrick's College, Drumcondra, in 1906–7. He taught for some years at St Francis's national school in Cork city centre. Meanwhile under the influence of the Leader (edited by D. P. Moran), to which he was to become a regular contributor, he joined the Gaelic League, thus beginning his role of cultural nationalist. His Irish, however, was never to be proficient. The League gave him an opportunity for social and cultural activities such as choral and musical performance. He played the cello and also took night classes in painting at the Crawford School of Art. He did sketching during League outings to the Cork Gaeltacht, becoming a watercolourist of some distinction, and this pursuit engaged him till very late in life.

While he developed his cultural philosophy and his enthusiasm for Irish Ireland, he also began writing short stories. In 1908 he was one of a group which established the Cork Dramatic Society (CDS). Its initial production, at the hall in An Dún, was Corkery's first play, ‘The embers’, a satire on contemporary Irish politics which was adjudged a critical success. Corkery's associates in the CDS included Con O'Leary, a UCC graduate who wrote two plays for the society and who was to become a leading Fleet Street journalist; T. C. Murray, the Macroom-born naturalist playwright; and Terence MacSwiney, who became a close friend. MacSwiney and Corkery shared a deep attachment to the west Cork Gaeltacht of Ballingeary, which Corkery first visited in 1909.

In 1913 he took up a teaching job in the north-side slum school of St Patrick's in noisy and overcrowded conditions. Among pupils whose potential he encouraged were Michael O'Donovan (whose alias was to be Frank O'Connor) and Seamus Murphy, the future sculptor. The 1916 rising and subsequent developments intensified his nationalist fervour. He left St Patrick's in 1920, reputedly being refused the principalship because of his political sympathies. He spent the next ten years working in various capacities under the auspices of Cork county vocational education committee. He was a travelling teacher of art, woodwork, and Irish, did clerical work for a time, and then served as an inspector in the Irish language.

Meanwhile his creative powers had found expression in various ways. Among his plays produced were ‘The labour leader’ (1919), ‘The yellow bittern’ (1920), and ‘Resurrection’ (1924). His most impressive work of short stories, The Munster Twilight, was published in 1916, but there were to be other collections – The Hounds of Banba (1920), The Stormy Hills (1929), and Earth Out of Earth (1939). His literary reputation was greatly enhanced by the publication of his first novel, The threshold of quiet, in 1917. This work of sombre realism, set in Cork city with autobiographical elements.

The Hidden Ireland, a study of the Irish-language poetry of eighteenth-century Munster and of the society and culture it reflected, appeared in 1924. It was his most significant and controversial work, provoking lively debate for decades, while its title introduced a new phrase into Irish cultural discourse. Synge and Anglo-Irish literature (1931) was his last major publication.

In 1931 Daniel Corkery was appointed to the professorship of English in UCC. As a professor, Corkery did not loom large as a ‘college person’, avoiding academic meetings and staying clear of college politics, though he gave some public lectures and participated in student society debates. His academic position enhanced his seminal ideological and literary influence and his central role in the national debate about history and culture.

Corkery retired from UCC in 1947. The NUI honoured him with a D.Litt. degree the following year, but he declined an invitation to become a member of the Irish Academy of Letters because of its neglect of Irish-language writers. He also sat on the Arts Council in the mid 1950s. Another recognition of his national standing was his appointment to Seanad Éireann (1951–4) as one of the nominees of the Taoiseach, Éamon de Valera. However, he made no contribution whatsoever to the proceedings of the house. In his declining years he was the cultural patriarch or guru of a devoted Cork circle, whose members visited him in his seaside bungalow home in Myrtleville in south Cork.

The collection spans those years of Corkery's life devoted to the Arts and Literature.  Nothing remains from his childhood or the era pre 1900, and very little of the material reflects his career as a teacher and an educationalist.  The bulk of the collection is formed by various drafts of his books, short stories, essays, lectures and notes from his voracious reading.  These notes were often jotted in a haphazard manner on anything convenient, notebooks, envelopes, letters, were all utilized.

The collection has been divided into seven main sections, each containing material similar and nature in content.

Section 1 is devoted to material relating to Corkery's early life.  Included here are records and memorabilia from his days as a founding member of the Cork Dramatic Society and The Twenty Club.  Very little remains however from his early association with the Gaelic League, but an account of those years can be gleaned from the mss. of a lecture `Corcaigh le linn m'oige' (UC/DC/20).  Contained also in this section are letters from friends of the time, including one from Terence MacSwiney in Reading Gaol in which, while advising Corkery on literary matters, he disavows the use of English in his own creative writings (UC/DC/35).  Included here also is the only conventional-form diary Corkery appears to have written (UC/DC/20).  Spanning the years 1907-1910 it records Corkery's struggles to come to grips with his novel The Threshold of Quiet and his views of, and thoughts upon the Cork of his day.

Section 2 contains material from Corkery's later career, mainly notes and letters from his tenure as Professor of English at U.C.C. (1931-1947), these include messages on the occasion of his retirement from Alfred O'Rahilly, President U.C.C. (UC/DC/58) and B.G. MacCarthy his successor as Professor (UC/DC/59).  This section also contains some sparse material from An Ciorcal Staideartha, the discussion group set up in Cork in the 1940's to promote literature and intellectual growth in the city.  Corkery's term as a Senator in Seanad Eireann (1951 to 1954) is represented merely by official notices and one plea by a constituent to assist her in claiming her late husband's full pension rights. (UC/DC/78).

Section 3 is concerned with Corkery's literary output.  It contains the various notes for, drafts of, and sometimes proofs, of most of his published works.  Contained also in this section are contemporary reviews mostly newspaper clippings collected by Corkery, referring to each of his works.  Sub-section E of this group `The Fortunes of the Irish Language' contains letters from the Cultural Committee chaired by Cearbhaill O'Dalaigh inviting Corkery to write the work.  (UC/DC/155). The mss. of Corkery's play `Epilogue' referred to by G.B. Saul was not present when the collection was being listed.  A contemporary newspaper account does however give a short account of the play as well as a character list. (UC/DC/406 (9).

Subsection F `The Romance of Nation Building' contains notes collected by Corkery for his never written study on nationalism. Subsection I `Newspaper Articles by Corkery' is the most complete surviving collection of Corkery's writings, but is not of course a definitive reference (see Bibliography). Included in sub-section K `Radio Work' are various drafts of reviews and lectures broadcast by Corkery for Radio Eireann.  Surviving here are a number of drafts of a lecture `The Book I am writing now' discussing the ill fated Romance of Nation Building. (UC/DC/400). Subsection M deals with the manuscripts and drafts of various lectures and essays written by Corkery throughout his life.

Section 4 then deals with Corkery's personal studies.  Here are described the commonplace notebooks he used for jotting down thoughts, observations and quotes throughout his life.  Also listed here are notes and references he jotted down concerning the various topics which interested him.  An avid hoarder of newspaper cuttings, this section also contains a large number of cuttings on many subjects including his own work. (III ii).

Section 5 stands testament to Corkery's deep love of Art.  His own paintings were not transferred to U.C.C., but included here are some rough sketches (UC/DC/567a ff), and his collections of postcards and clippings of various sculptures from early Greek and Roman to modern times (subsection iv).  Details of various exhibitions of his works are also preserved.

Section 6 is devoted to those letters Corkery received and which were preserved after his death.  They have been subdivided into those of a business nature: A) Letters from Publishers; B) Tax Authorities; C) House Sale; Congratulatory letters received on the occasion of his eightieth birthday are listed in subsection D, while E contains diverse personal letters received over the years from friends and acquaintances.  Several are from people introducing themselves to Corkery as admirers of his work including UC/DC/742 from Frank Caulfield-James, whose father acted as tutor to the children of the King of Siam after the departure of the celebrated Anna.

Sub-section F is correspondence between Daniel Corkery and his friend, the prominent Gaelic Leaguer, Tomás Ó Muircheartaigh. These letters, over 850 in number, are not listed and as such, are not yet available to the public. Discussions are on-going to have this material listed.

The final section - 7 - contains memorabilia and photographs.   These include photographs of Gaelic League members from the 1920's upwards on various excursions to West Cork and Kerry as well as a number of portraits of Corkery and various family members.  Included also are a hauntingly stark set of shots, most likely taken by Tomas Ó Muircheartaigh (UC/DC/P32).  Several memorial cards are included in the memorabilia section as well as the results of an eye test .

Because of his well-documented association with Frank O'Connor and Sean O'Faolain, it is presumed researchers interested in these two men would look to the Corkery papers for information.  The celebrated rift between Corkery and his erstwhile protégés is apparent in this collection from the paucity of references to them.  Mention of O'Faolain crops up rarely.  Once in a letter from Corkery's old friend Con O'Leary (UC/DC/51) who when speaking of Liam O'Flaherty remarks disparagingly `It's obvious he wasn't political as a boy, as like O'Faolain's pictures of old-time politics it is very inaccurate'.  His name crops up again in a letter from M.J. MacManus, editor of The Irish Press who urges Corkery to take up the attack on O'Faolain where he has laid off (UC/DC/775).  An offer Corkery seems to let pass.
References to O'Connor are even scarcer.  The only link survives as a sheet of poems by John Lone of Carrigaline, Co. Cork named by Sean Hendrick in M. Sheehy ed. Michael/Frank Gill and MacMillan 1969 p.11 as having been given to O'Connor when he was 16 or 17.  Some newspaper clippings referring to O'Faolain and O'Connor survive but there are no direct references by Corkery to either man. 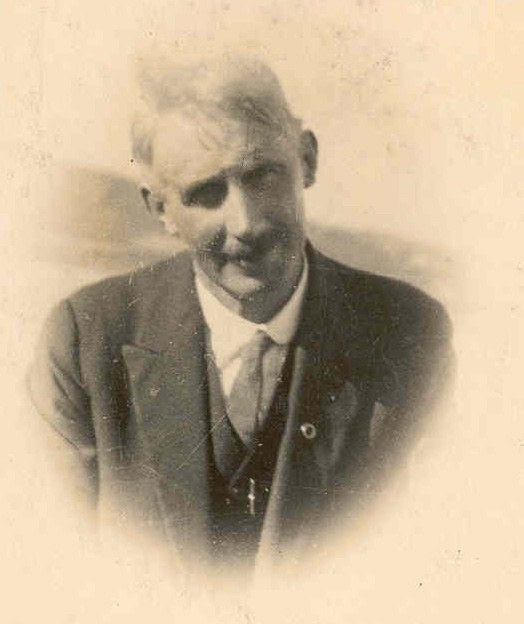