Hawtin: Displaying a Collection: Christmas in the Journals

This is a small selection of the literary and artistic journals within the Hawtin collection and information related to them is arranged by the founding date of the journal:

In 1865 the publisher Alexander Strahan set up The Argosy to complement his other literary journal, Good Words, and as a rival to Cornhill Magazine. The Argosy's first editor was Isa Craig. In October 1867 Strahan sold the magazine to Mrs Henry Wood (Ellen Wood). She took over the editorship in 1867 and continued in that role until 1871 when she sold it to Richard Bentley. Mrs Henry Wood used it as a vehicle for publishing her own fiction. The magazine featured several Sensational novels and short stories including those by Charles Reade, Ellen Wood and Margaret Oliphant. Mrs Henry Wood established sensation fiction as a respectable genre that occupied the same space as sentimental poems and anodyne reflections on the meaning of life, a glimmer of scandal among so much of the ordinary as it was read at the middle-class fireside. The Argosy stopped publishing in 1901.
Contributors and contributions for Vol V, Dec 1867-May 1868 include:

The Bookman: An Illustrated Monthly Journal for Bookreaders, Bookbuyers and Booksellers lasted from 1891-1934 until it merged with the London Mercury. It was published by Hodder & Staughton and initially produced as an advertising tool for their catalogue however it also published essays and reviews. Special double issues were produced at Christmas featuring tipped-in plates by important illustrators. Articles for The Bookman Christmas (1914) include "Louvain from The Glory of Belgium" by WB Gaverman. The Bookman Christmas for both 1914 and 1915 cost two shillings and sixpence.

The Studio: An Illustrated Magazine of Fine and Applied Art was a monthly magazine which ran from 1893-1964. The Studio was founded by Charles Holme (1848-1923) and it is a richly-illustrated important magazine in the Arts & Crafts movement. Items in the 15 December 1903 issue include reviews and articles:

The Dome was published by the Unicorn Press at 7 Cecil Court, London. Its subtitle varied from "A Quarterly Containing Examples of All the Arts" to "An Illustrated Monthly Magazine and Review." The journal ran from March 1897 to July 1900 and it was edited by Enest J Oldmeadow. The journal was part of the late 1890s scene which included The Yellow Book and The Savoy. The Dome dealt with both visual and verbal art as well as music and theatre. There is no index to The Dome.  The 1898 issue includes the following:

One volume of The Dome is within the Hawtin Collection and another volume within Daniel Corkery's collection.

The Poster: An Illustrated Monthly Journal was devoted to the artistic poster and ran from 1898-1901. The Poster occupied the intersection of the Arts & Crafts movement, Art Nouveau and Stile Liberty movement. The cover to each issue was printed chromolithography. Artists featured in The Poster included Jack B Yeats, Aubrey Beardsley and John Hassall (1868-1948) known for poster designs, particularly for the theatre. The Poster provided advertisements, articles, numberous drawings and etchings (some color) and copies of advertising posters and theatre billboards.

The Connoisseur: A Magazine for Collectors ran from 1901 to 1992 covered luxury topics such as fine art, collectibles and antique furniture. It was published initially by the London publishing house Sampson Low, Marston & Co (see defunct publishers) and in 1927 was acquired by Hearst Publishing. JT Herbert Baily (1864-1914) acknowledged in the first issue that a magazine ‘devoted to any and every object that is or can be collected’ was a new thing. Baily was certain that this journal would be a success due to the significant ‘increase in the interest in and desire for things old and beautiful and rare.’ (The Connoisseur September 1901, 1-2).

The Connoisseur was lavishly illustrated with an eclectic range of material objects it discussed: china, glass, ware, interiors as well as reviews, notes, queries, letters and feature articles. Feature articles in December 1911 included:

Each section was accompanied by a unique woodcut header.

La Baïonnette was a fortnightly satirical French magazine which ran from 1915-1920. The name is taken from the phrase "charger à la baïonnette." The magazine was originally known as 'Coups de Baionnette' and 'À la baïonnette' before changing to La Baïonnette in mid-1915. In general it was a patriotic publication seen from the point of view of the common foot-soldier, housewife, or French worker.

In 1919 Harold Munro (1879-1932) started the modernist journal The Monthly Chapbook: A Miscellany following two other ventures: The Poetry Review and Poetry and Drama, suspended at the end of 1914. The Monthly Chapbook would prove not to be commercially viable, but contained not only some of Munro's best work but also provided a 'cultural middle ground' between modernism and more traditional work. To do this Munro took a broad view on 'poetry' with entire issues devoted to children's rhymes and to songs by Walter de la Mare complete with scores. Such a viewpoint is indicated by the subtitle 'A Miscellany.' Munro's intention was to 'entertain rather than elevate.' Munro provided portfolios to contain the copies previously produced as well as binding cases so that the issues could be bound up complete in their cases. The set of The Monthly Chapbook is in such a portfolio case.

The Bookman's Journal & Print Collector: A Weekly Devoted to Literature and the Collecting of Books and Prints was a weekly bibliographic magazine which ran from 1919-1931. The journal was aimed at collectors, booksellers, librarians and all readers. The journal was edited by Wilfred Partington (1888-1955). The issue for 26 December 1919 includes the following:

Dictionary of Nineteenth-century Journalism in Great Britain and Ireland.

The Dome at The Modernists Journals Project A Joint Project of Brown University and the University of Tulsa.

The Studio at Historic Literature, part of Universitats-Bibliothek Heidelberg.

Christmas in the Journals 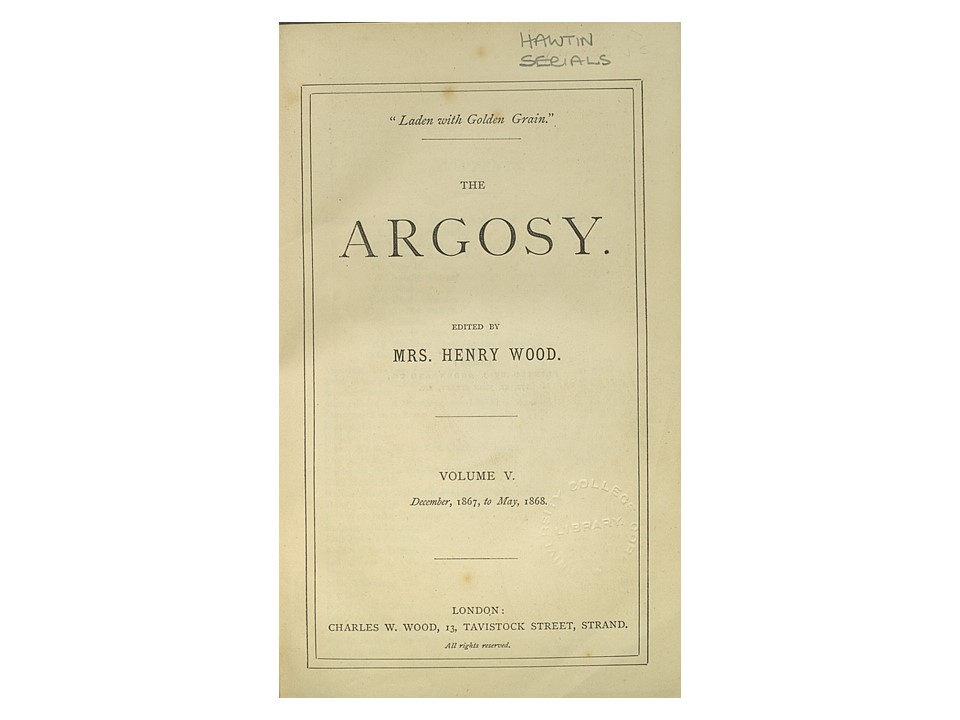 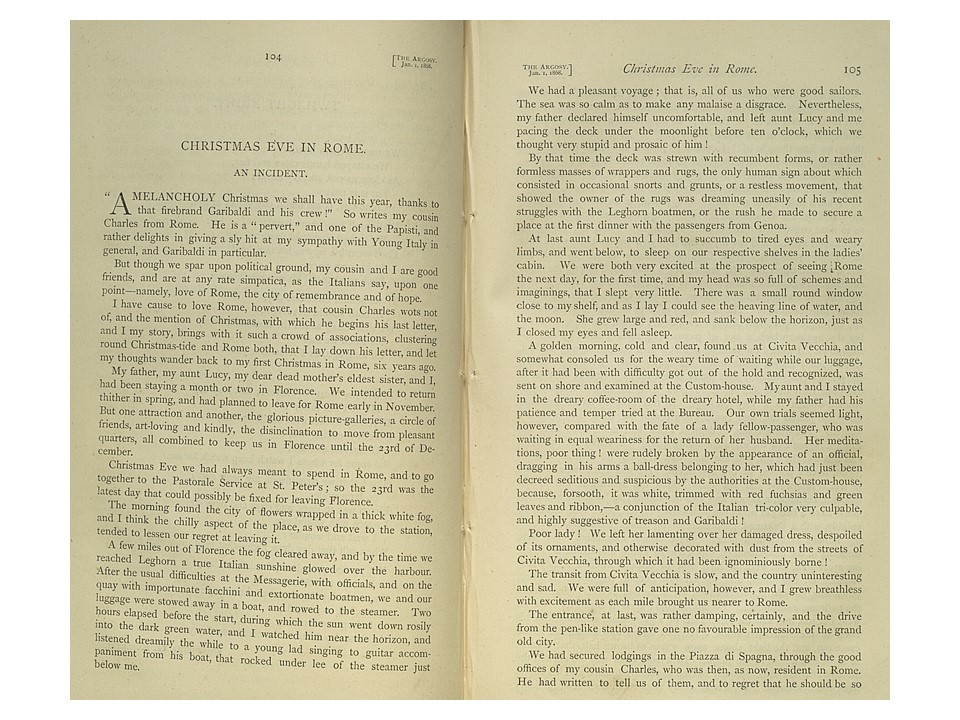 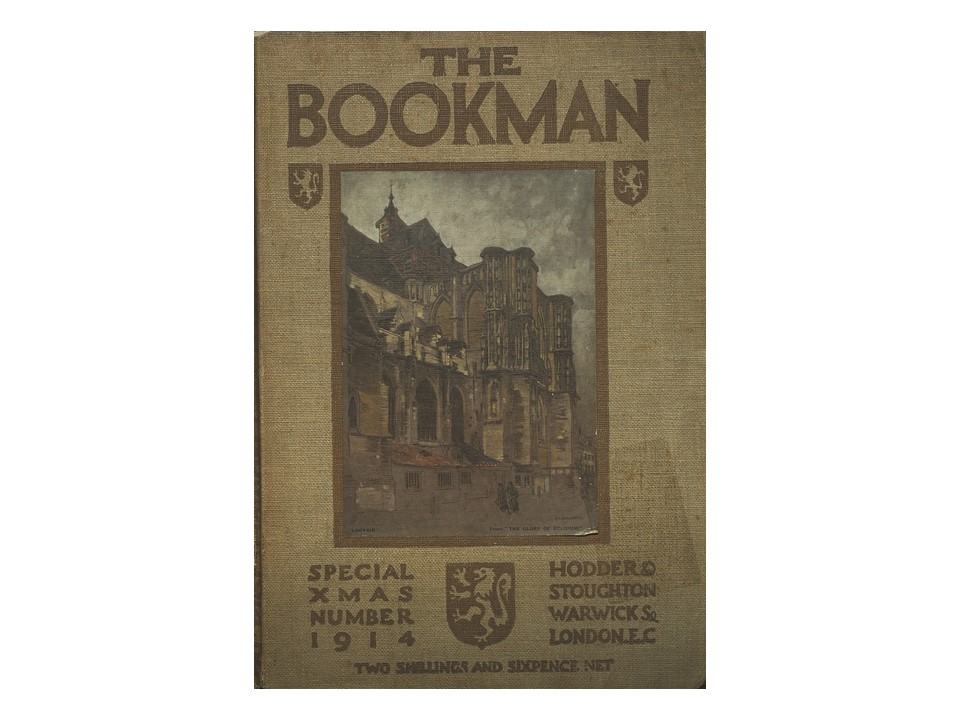 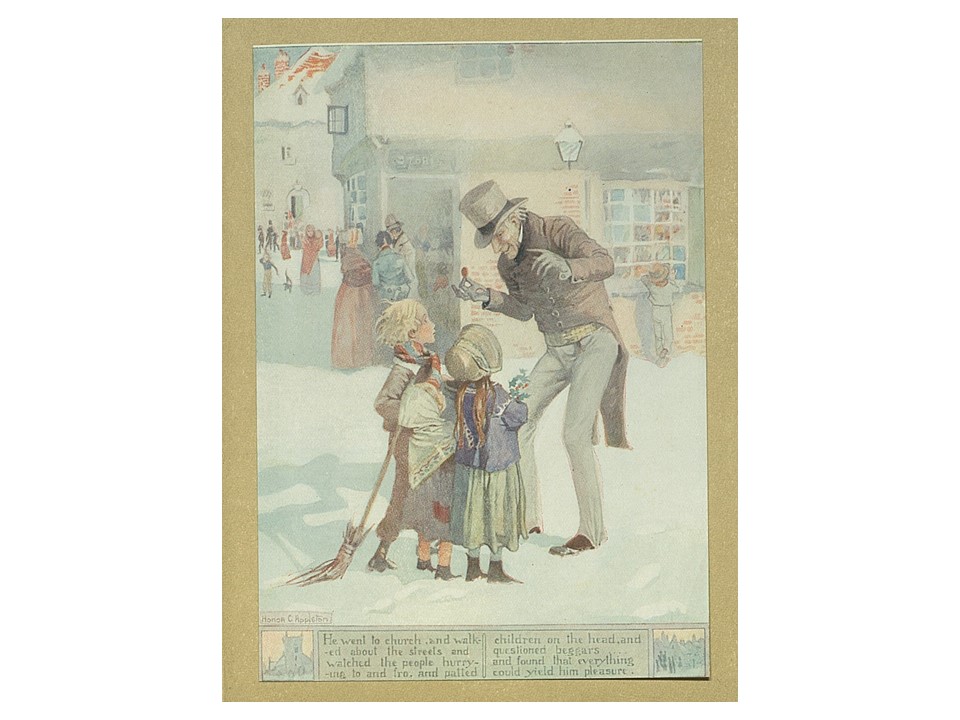 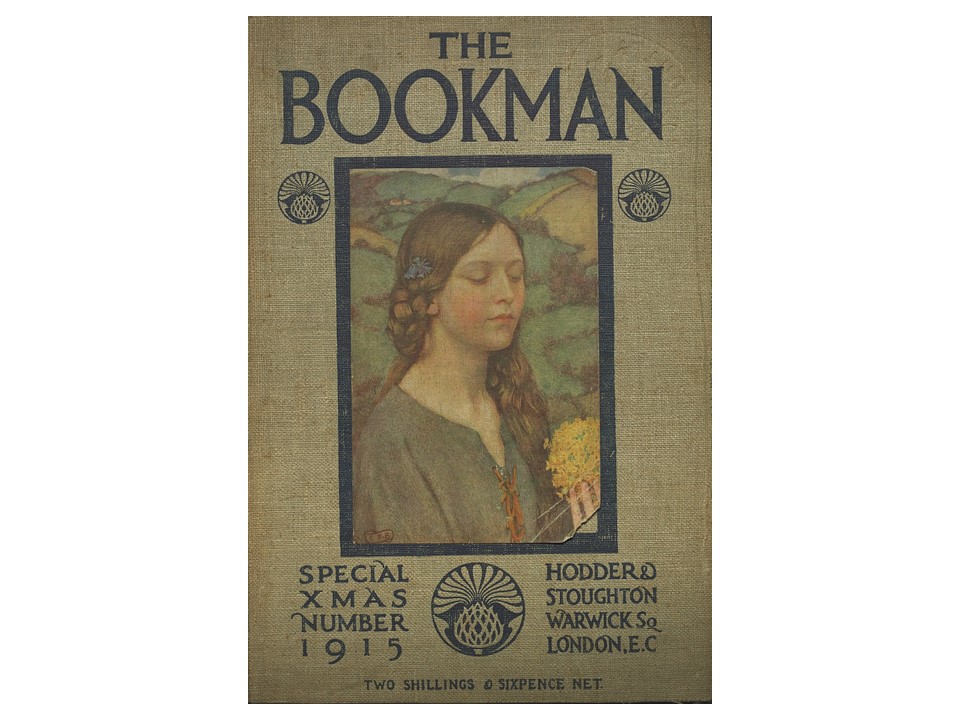 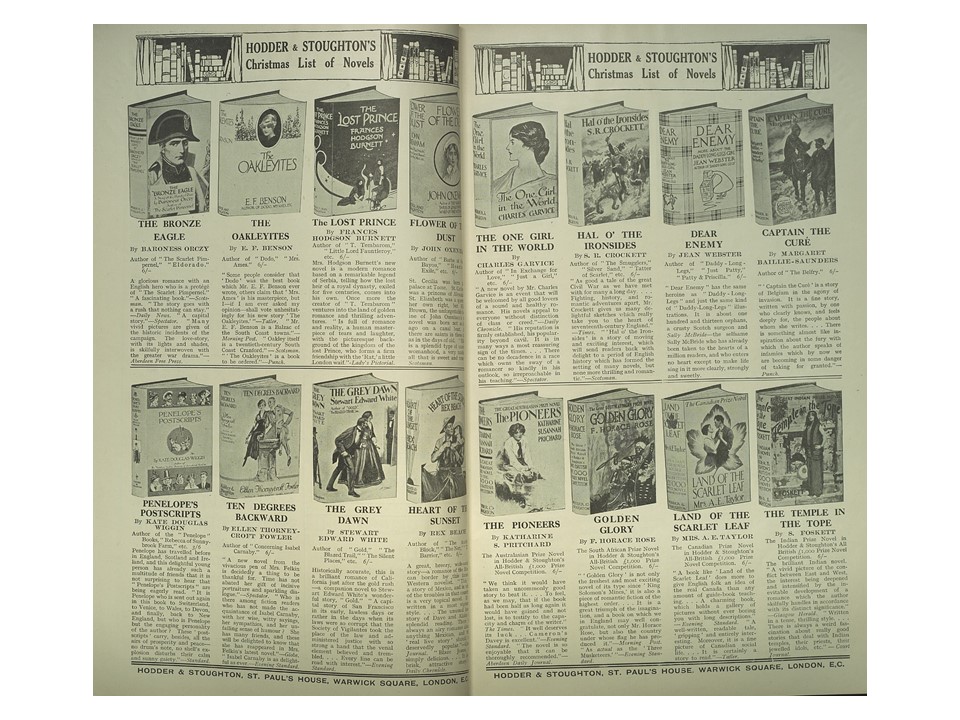 Christmas Books in the Bookman (1915)

Advertisements for Hodder & Staughton books in the 1915 Christmas issue of The Bookman. 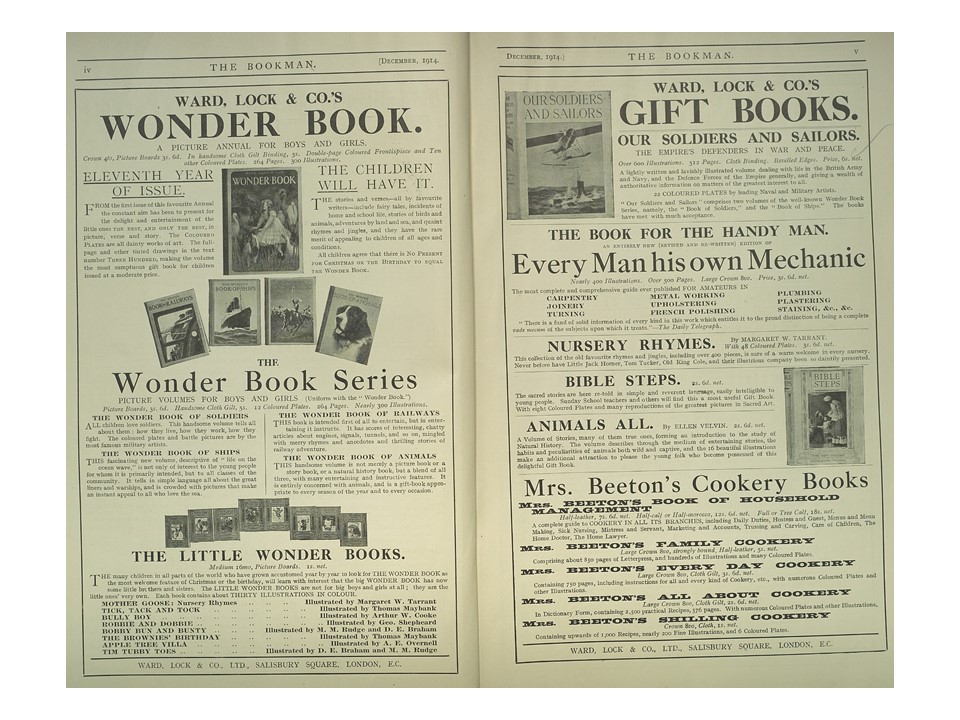 Christmas Books in the Bookman (1915)

Advertisements for Ward, Locke & Co items in the 1915 Christmas issue of The Bookman. 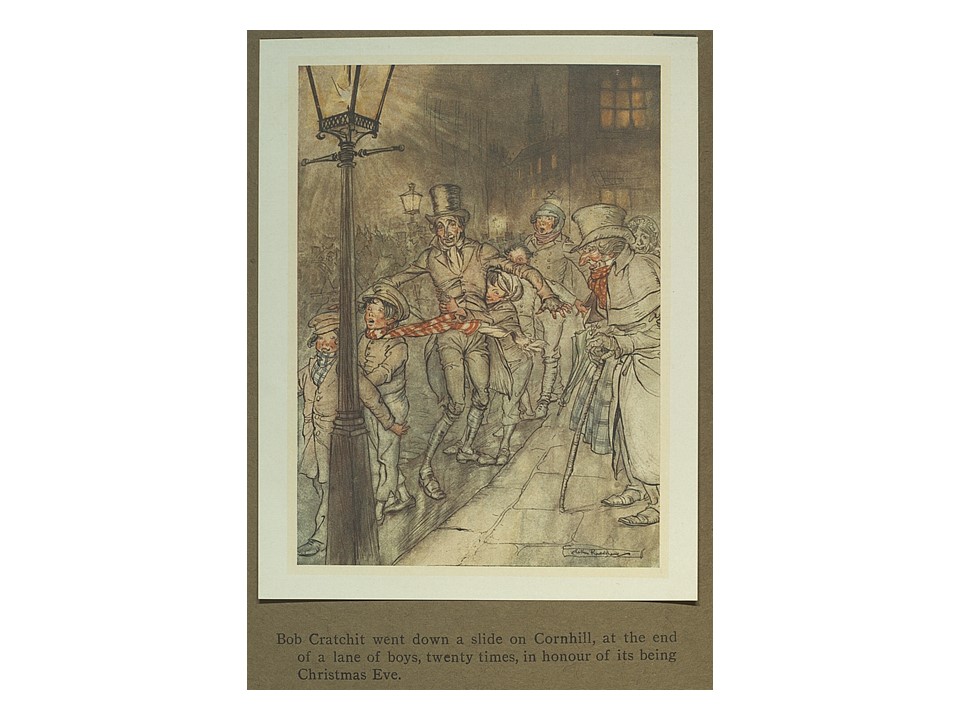 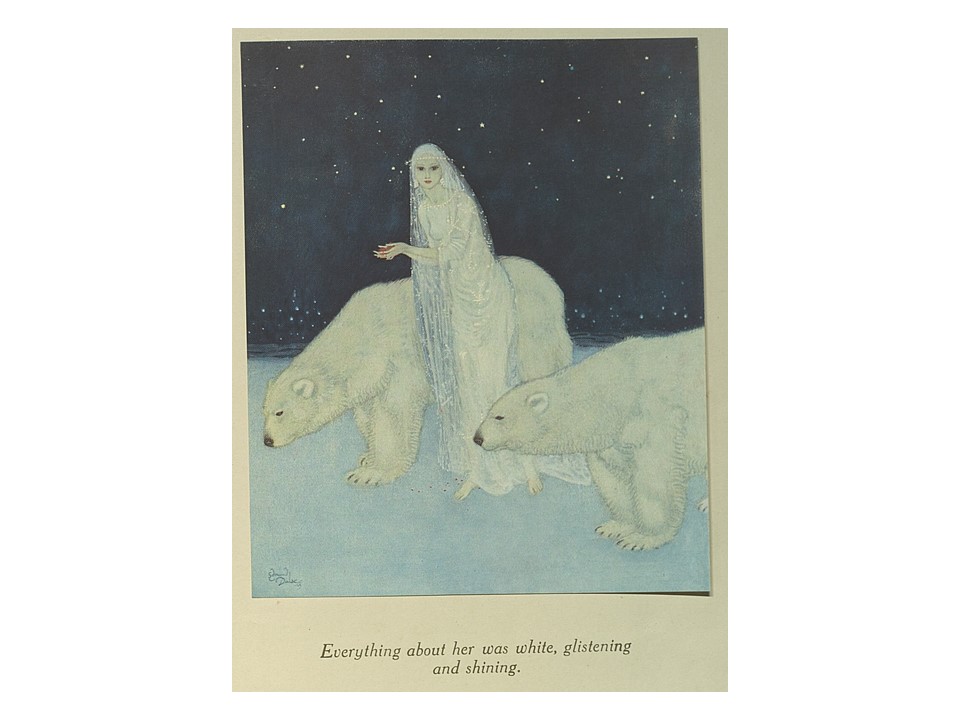 One of Edmund Dulac's illustrations 'The Ice Maiden' originally produced for Queen Marie of Romania (1875-1938) The Dreamer of Dreams (1915), published by Hodder & Stoughton. This is a tipped-in illustration for The Bookman Christmas (1915). Dulac (1882-1953) was a noted magazine illustrator, book illustrator and stamp designer. 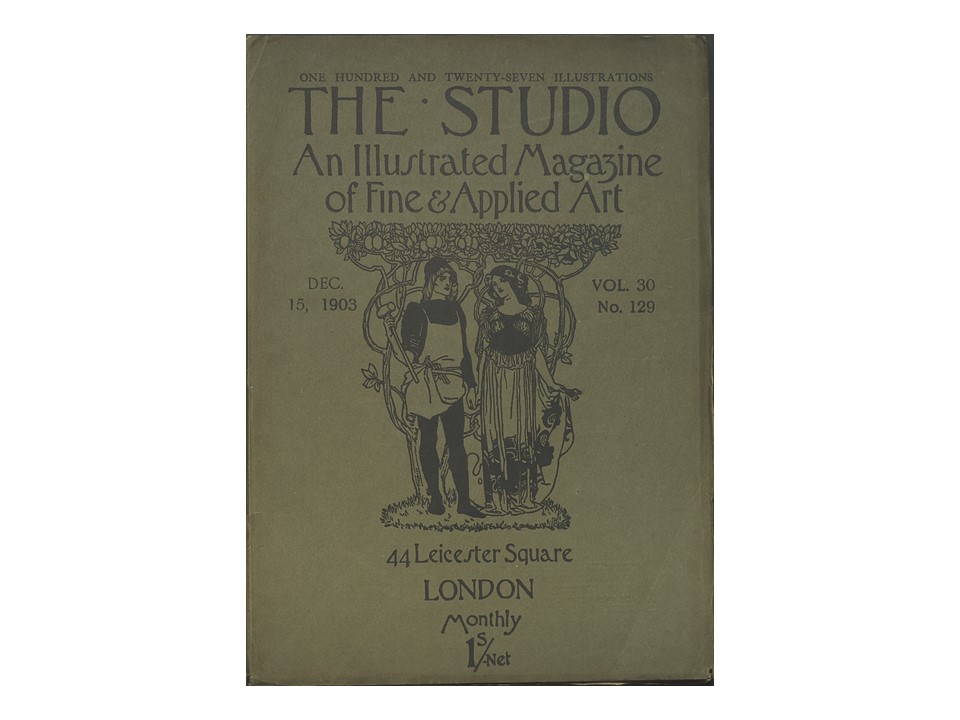 The cover from 15 December 1903 of The Studio: An Illustrated Magazine of Fine & Applied Art is a Robert Anning Bell (1863-1933) design and it was used from 1895-1929. On the left is an image of a young male artisan upholding a hammer suggesting skill but also power and rule. His rolled up sleeve conveys masculine labour as do the apron and hammer. The woman represents beauty and she holds paintbrushes indicating she is the fine artist. The two figures are holding hands and of nearly equal height, suggesting partnership. Behind the duo are trees which suggests the countryside, placing labour in a natural not a factory setting. The trees are both fruit-bearing and flowering signifying that which is useful: the applied arts, and that which is aesthetically pleasing: the fine arts. The trees branches remind us of a stained glass window, a form which was popular with both the Arts and Crafts movement and with Art Nouveau. 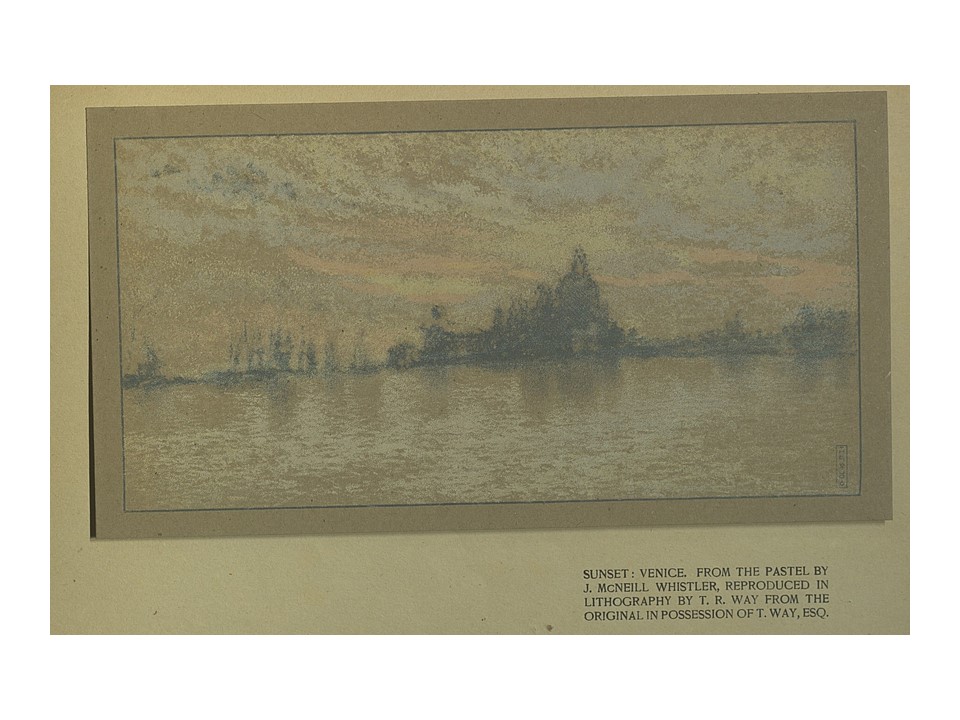 The Studio : an illustrated magazine of fine & applied art. 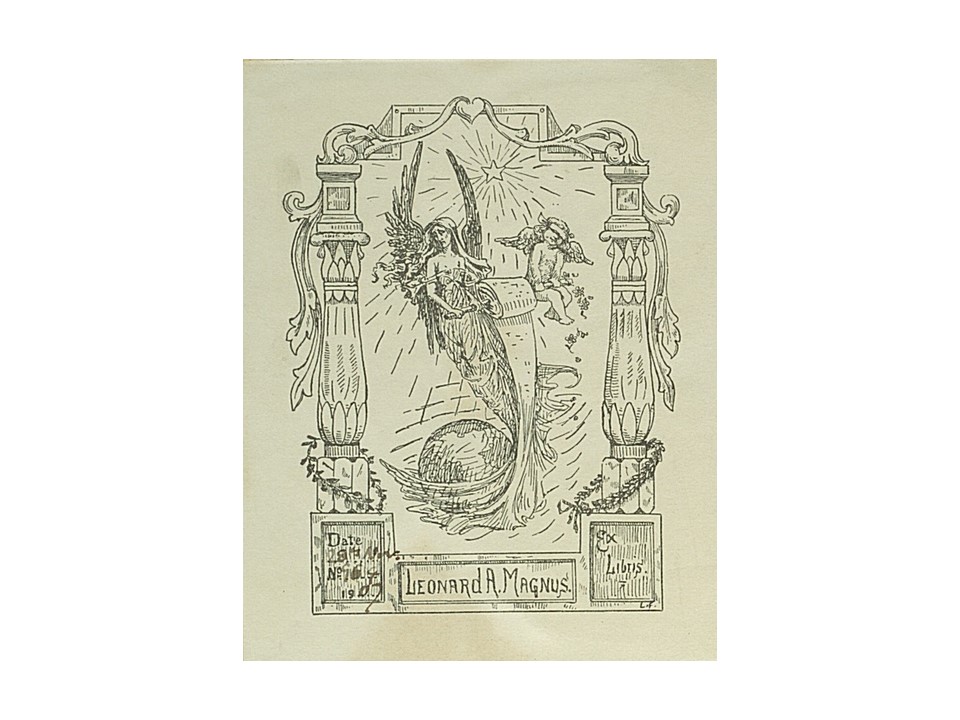 The Dome: Bookplate of Leonard A. Magnus

Magus' bookplate is on the front endpapers. 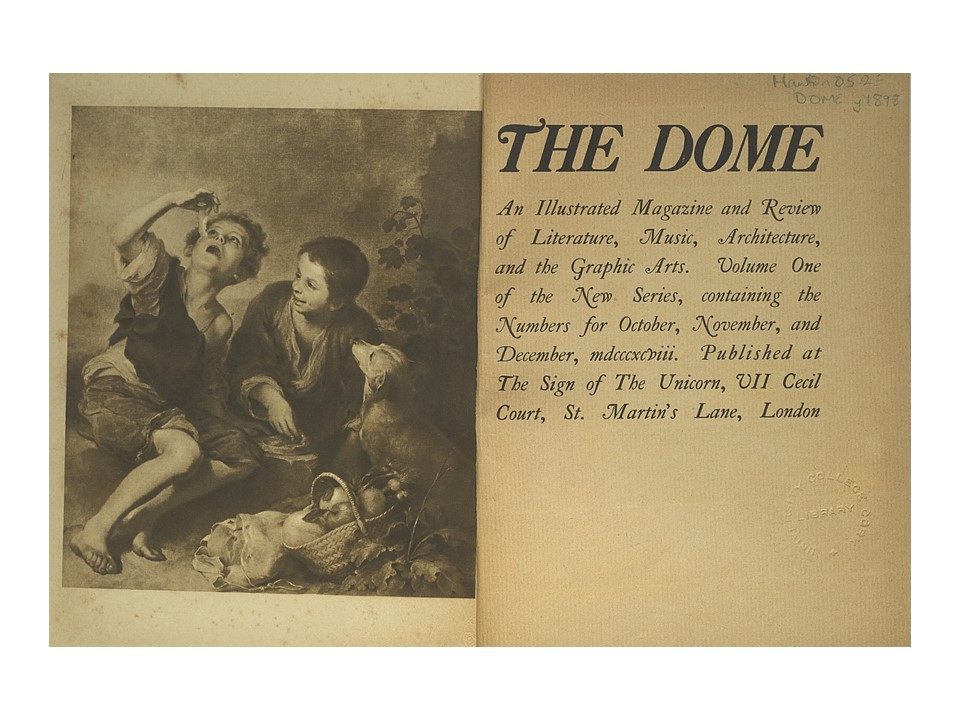 At the Sign of the Unicorn also published the following:

7 Cecil Court, where the Unicorn Press was based, is currently occupied by Pinda Bryars Books, an antiquarian bookseller. 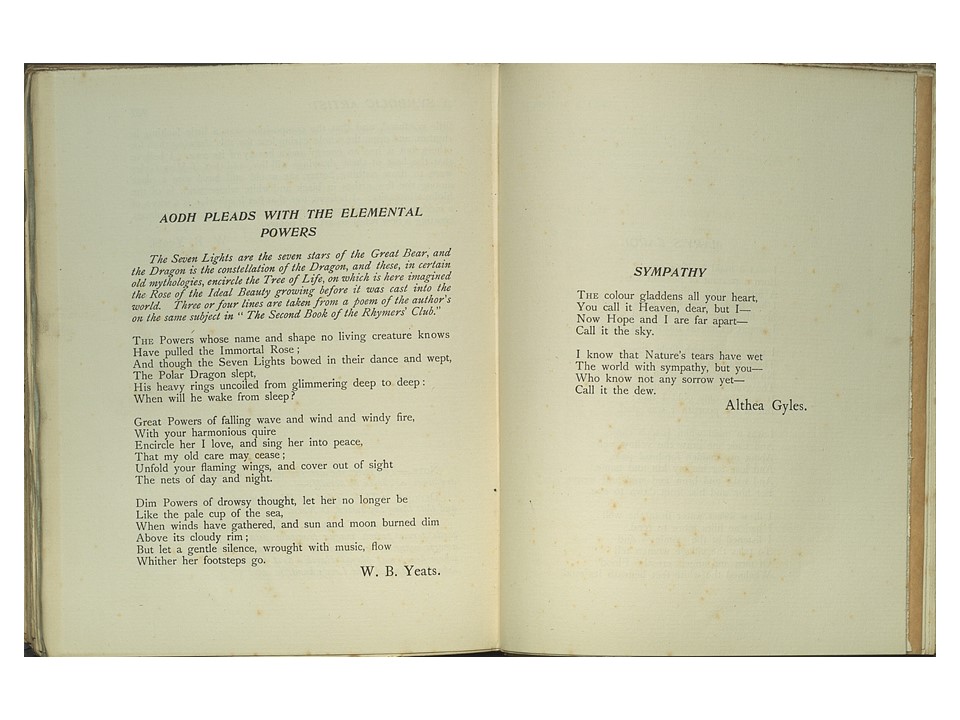 This the first publication of "Aodh Pleads With the Elemental Powers" by WB Yeats. The poem was later published within The Wind Among the Reeds. WB Yeats (1865-1939) was a Nobel prize-winning poet associated with the Irish Literary Revival.

This is the first publication of "Sympathy" by Althea Gyles. The poem was later published in A Treasury of Irish Poetry in the English Language by Stopford A Brooke and TW Rolleston in 1900. Althea Gyles (1868-1949) was a noted Irish poet and book designer, frequently producing book cover designs for WB Yeats. Such covers include The Secret Rose (1897). 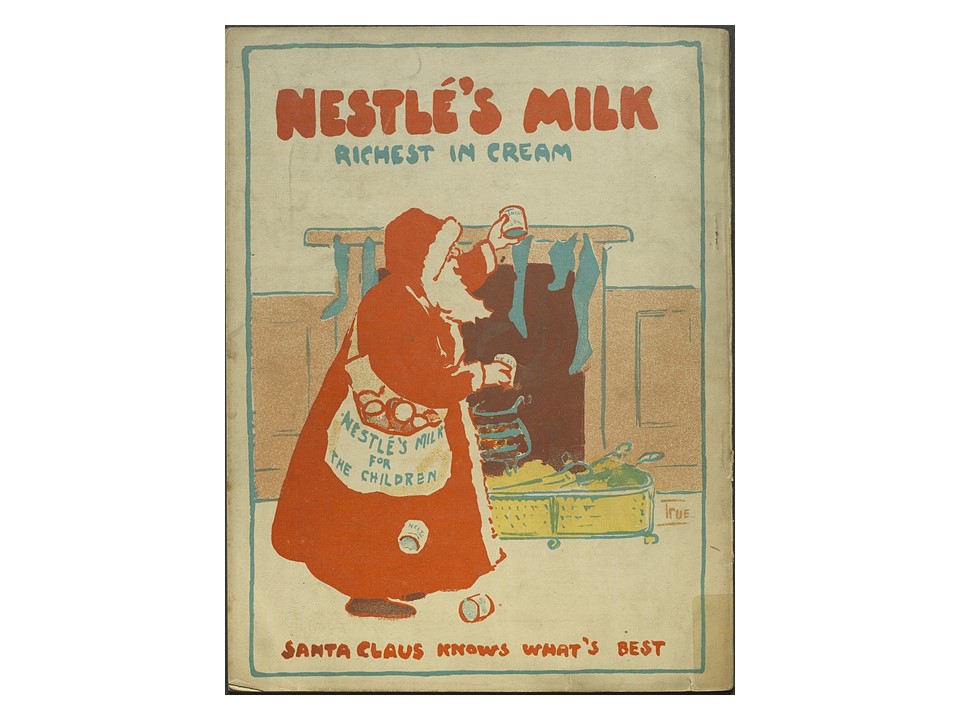 The Poster: Advertisement for Nestle Milk

This advertisment is on the back cover to The Poster, December 1898. Contained in the issue are other advertisements for unsweetened condensed milk which is sold in the Henri Nestle shop on 48 Cannon Street London. 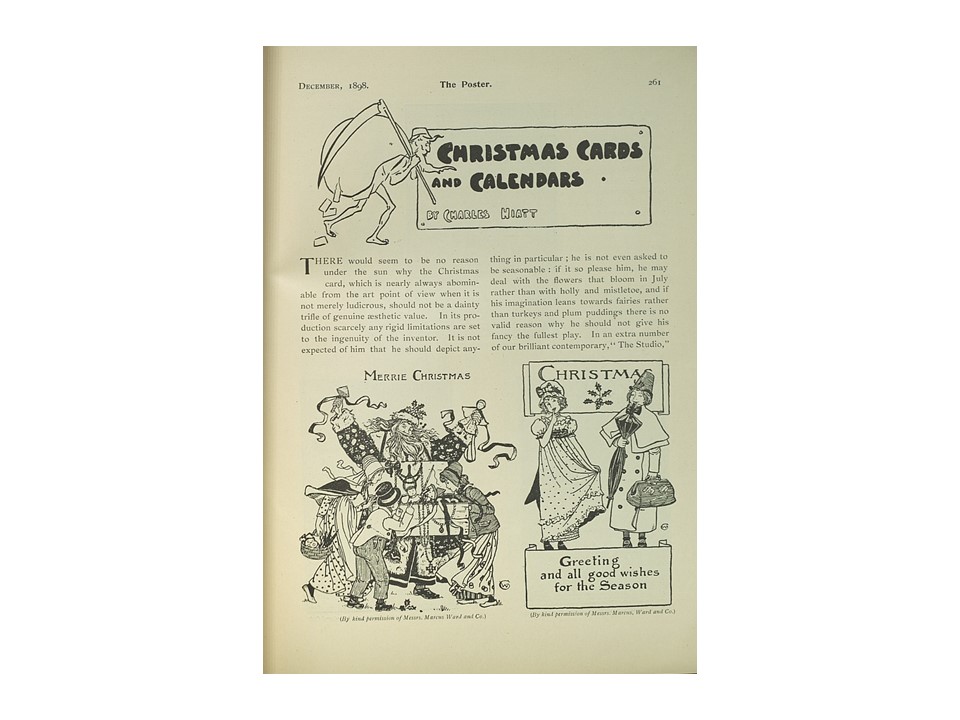 The Poster, December 1898 was a double issue for Christmas and cost one shilling. This issue contained special announcements and a feature on Christmas cards and calendars by Charles Hiatt (1869-1904) who was a noted writer on posters. 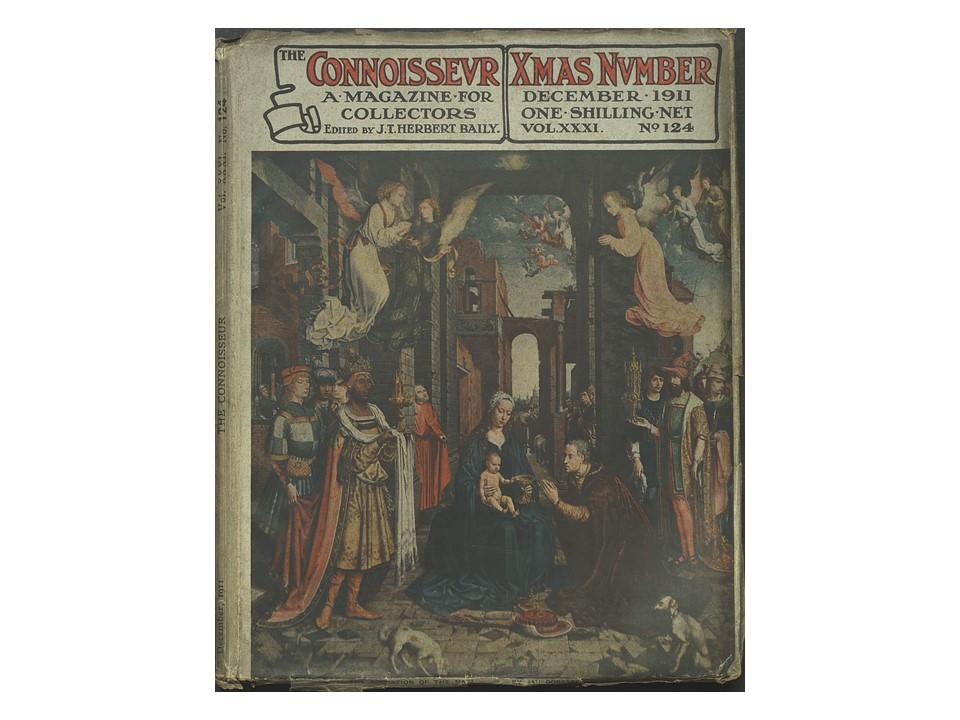 The Connoisseur: A Magazine for Collectors

The Connoisseur: A Magazine for Collectors cost one shilling in December 1911, or approximately £3.90.

The front cover shows Jan Gossaert of Mabuse's "The Adoration of the Magi" (1510-1515).  In 1911 the National Gallery, London bought the painting from George Howard, 9th Earl of Carlisle. The National Gallery published a monograph by Maurice W. Brockwell to commemorate the acquisition – the first such publication by the gallery. ﻿ 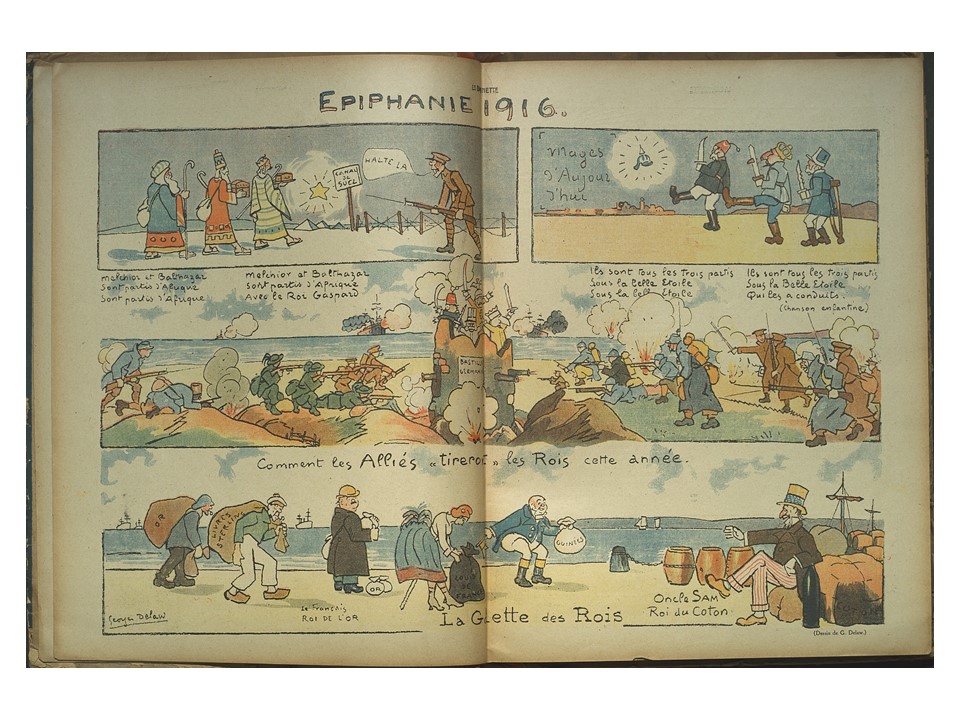 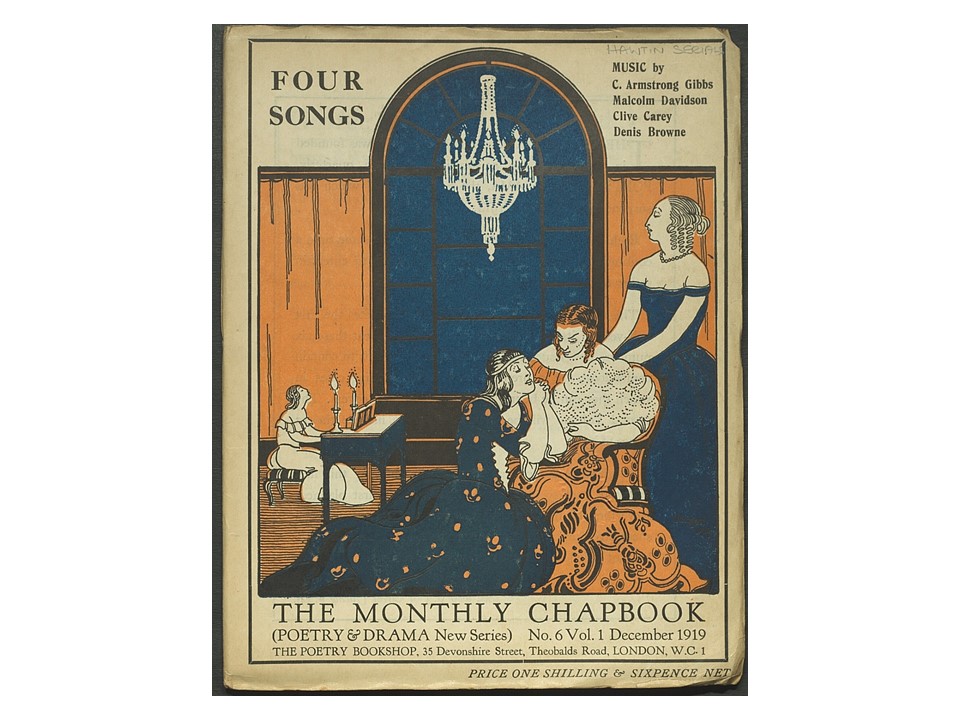 The Monthly Chapbook: A Miscellany

The Monthly Chapbook: A Miscellany was published by The Poetry Bookshop where Munro was the proprietor. The cost was one shilling and six pence, roughly the equivalent of £2.20 according to the National Archives in Kew.

This issue of The Monthly Chapbook is the 6th and concludes volume 1. Munro notes "imaginative and critical literature has not, in this first half-year, been so fully represented as was first planned. Increasing support is ample proof The Monthly Chapbook has not failed to interest its readers. The next 12 issues in 1920 are to form volume 2. 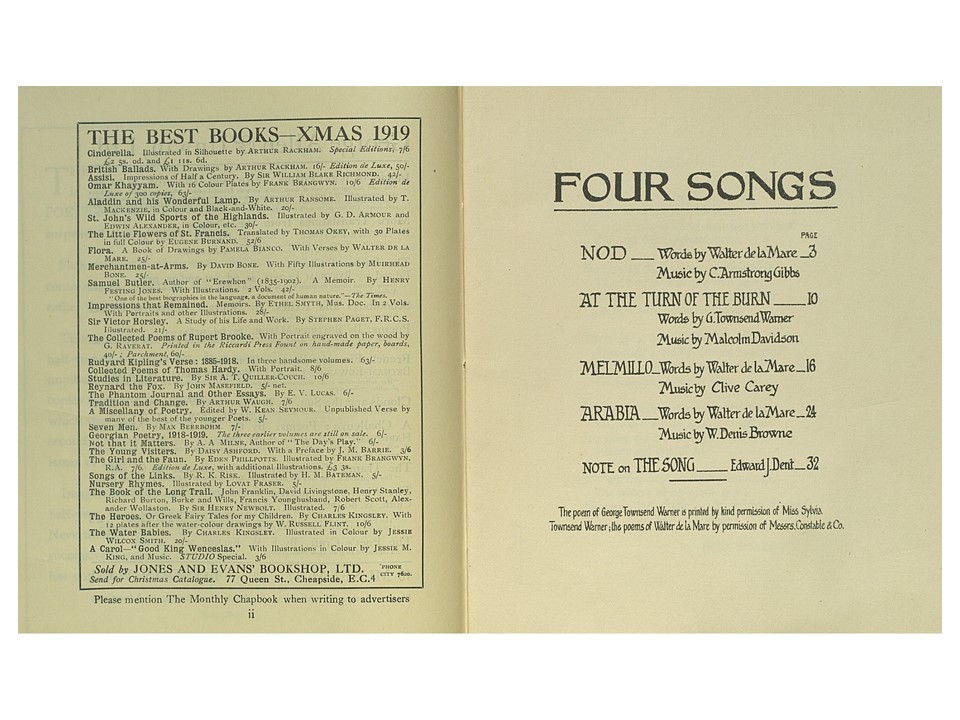 William Charles Denis Browne (1888-1915) was a composer and music critic killed during the Gallipoli Campaign.

Typical adverts in The Monthly Chapbook are for: A selection of Best Books for Xmas 1919 at Jones & Evans' Bookshop, 77 Queen St, Cheapside; and George Allen & Unwin Lt, 40 Museum Street 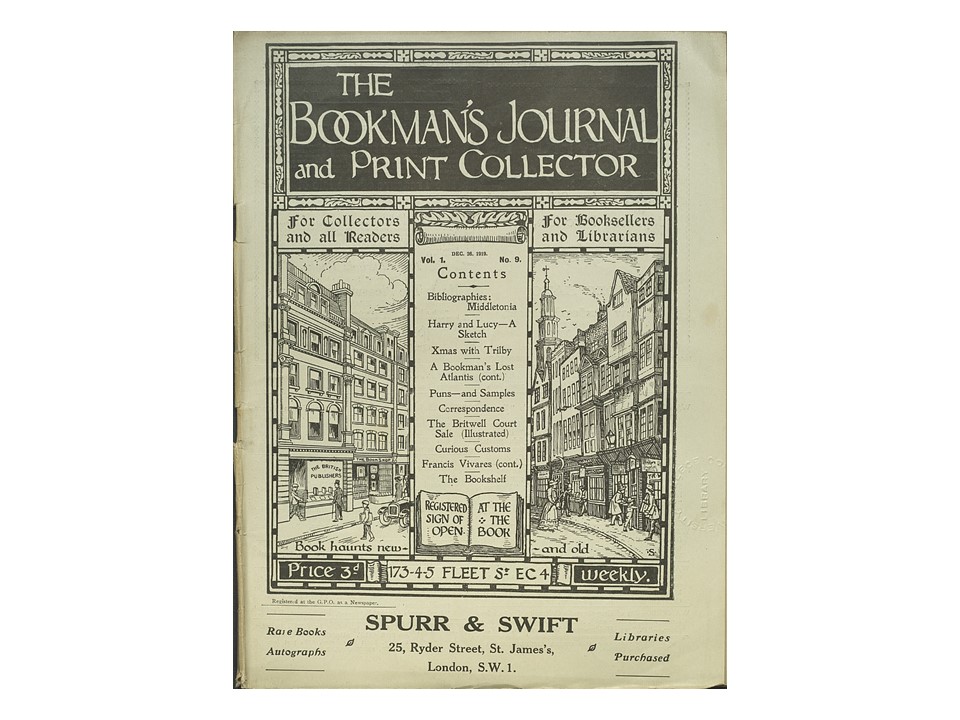 Cover to The Bookman's Journal and Print Collector  A Weekly Devoted to Literature and the Collecting of Books and Prints. 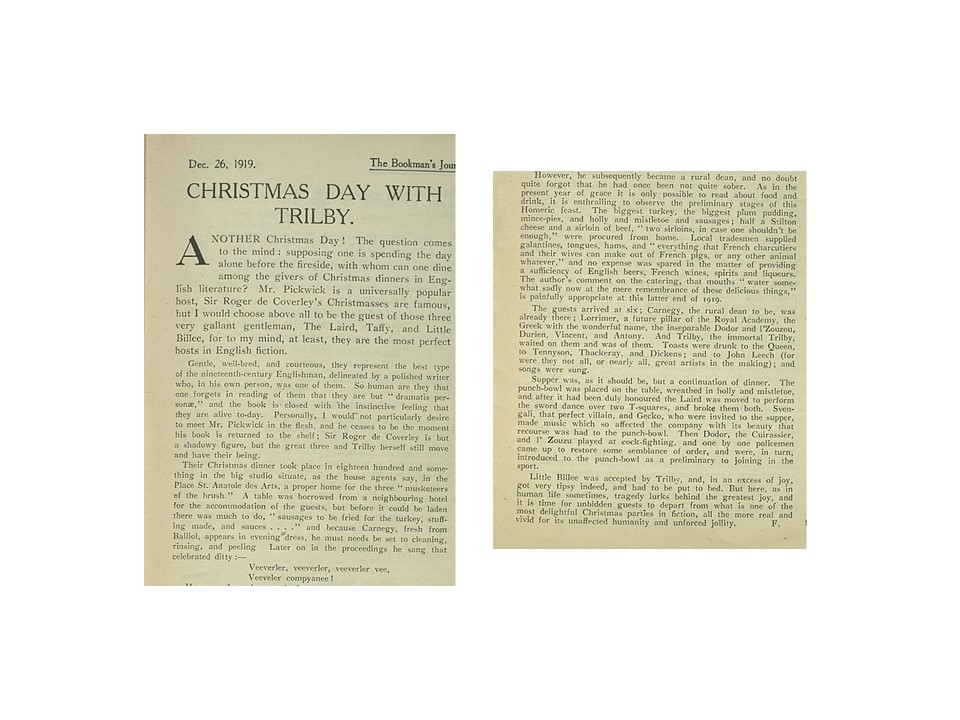 Christmas with Trilby in The Bookman's Journal & Print Collector

This issue from 26 December 1919 of The Bookman's Journal and Print Collector: A Weekly Devoted to Literature and the Collecting of Books and Prints cost three shillings.