Jules Verne (1828 – 1905) was a French novelist, poet and playwright although he’s best known in English-speaking countries as an early writer of science fiction. These ‘science fiction’ novels however are better described as ‘adventure yarns in far-away places’ whether those places be the moon, under the ocean or a different continent. From 1863 – 1905 he wrote a sequence of fifty-four novels known as ‘Voyages Extraordinaires.’  The novels were first serialised in a bi-weekly magazine Magasin d’Éducation et de recreation and subsequently the texts were published as complete unillustrated book forms or using the original illustrations from the serialization in a larger format with gilded and coloured bindings. The goal of the Voyages Extraordinaires (VE) was to outline all the geographical, geological, physical, and astronomical knowledge amassed by modern science. Coupled with Verne’s meticulous attention to detail and scientific trivia is his sense of wonder and exploration.

The only 19th century French edition UCC Library holds is Vingt mille lieues sous les mers (#6 VE). The title page is stamped ‘F. St. John Lacy’ who was an early 20th century music lecturer in UCC. This edition is one of ‘Collection Hertzel’ and is thought to have been published in 1871. UCC Library received it on 9 June 1936 and it is likely it was donated to the library after Frederick St. John Lacy’s death in 1935. Alphonse de Neuville (1835-1885) collaborated with Edouard Riou (1833-1900) on Vingt mille lieues sous les mers — all of the illustrations from chapter 12 onwards are those of de Neuville.

According to UNESCO, Verne is the second most translated author between Agatha Christie and William Shakespeare. English translations of Verne’s sequence of novels began in 1869 and continued throughout Verne's lifetime. However in Great Britain and America publishers chose to market Verne’s books almost exclusively to young audiences. In addition the 19th century English-language translations have been widely criticised for their extensive textual omissions, errors, and alterations.

Sampson Low (1797–1886) founded the firm in 1848 with his son Sampson Low Jr. In 1856 Edward Marston joined the firm and in 1872 Samuel Warren Searle joined. In 1879 William John Rivington joined. Each time the name changed to reflect the additions. The firm was based first in Fleet Street, Ludgate Hill and then at St Dunstan's House in Fetter Lane. Both Ludgate Hill and Fetter Lane are adjacent to Fleet Street which was the centre of British publishing and printing from the 18th - late 20th centuries. Sampson Low, Marston & Co. published works by William Black, Henry Morton Stanley and Jules Verne. Sampson Low, Marston & Co. acquired the rights to Jules Verne publications in 1871 and eventually the total number of Jules Verne separate works bearing the imprint numbered fifty-five (Marston 177-178).

There are a few items of interest to Ireland as Verne was very familiar with the Irish coast when he travelled to America in 1867 on board The Great Eastern which was involved in the laying of the transatlantic cable from Valentia and in 1880 when he sailed to Ireland on his yacht Saint-Michel.

The Extraordinary Adventures of Foundling Mick is a fascinating social commentary on 19th century Ireland. Mick is a young orphan and the novel describes his visits to Westport, Galway, Limerick, Tralee, Cork and Belfast. It was originally published in French as P'tit-Bonhomme (1893) with the first English translation published by Sampson Low, Marston and Co in 1895. The Royal Irish Academy republished it in 2008.

Tadhg Ó Donnchadha ("Torna") Prof. of Irish (1916 – 1949) at UCC translated Around the World in Eighty Days as Cuairt na Cruinne in Ochtó Lá. The translation first appeared in 1912 in weekly instalments in The Irish Weekly Independent. Towards the end of chapter 33 there is a reference to Cobh and the mail trains which left Cobh and brought the mail to Dublin and hence to Holyhead a full 12 hours before the ships made land. Use of the mail trains in this manner continued until the early 1950s. However Torna made a mistake! The time mentioned for the train in the Irish translation is "timpeall leathuair tar éis a haon déag san oíche" but the French version is "á une heur et demi du matin." 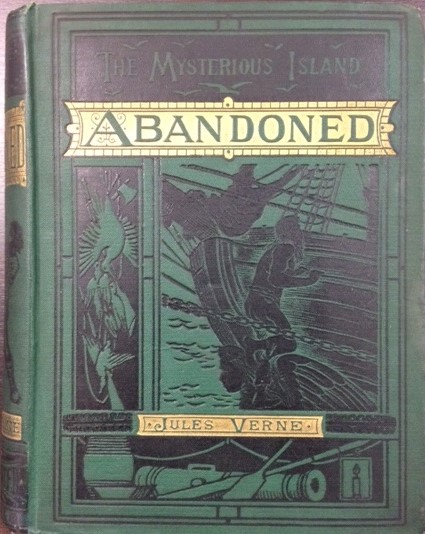 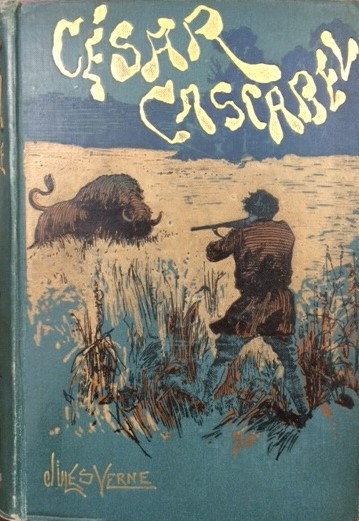 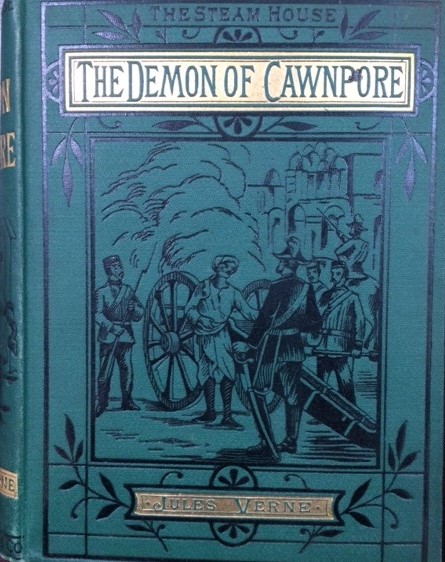 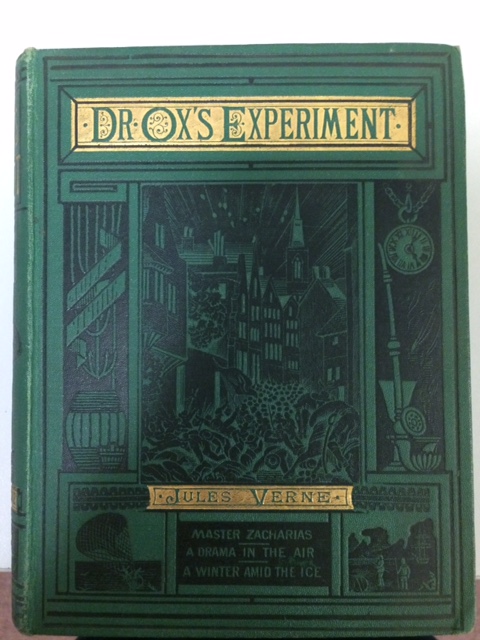 Dr Ox’s Experiment and Other Stories with numerous illustrations. 2nd ed. London: Sampson Low, Marston, Low and Searle, 1875. Pictorial binding in green and black with gilt edges. The first edition was published the previous year. The stories contained within the volume are “Dr Ox's Experiment,” “Master Zacharius,” “A Winter Amid the Ice” and “Ascent of Mont Blanc.” 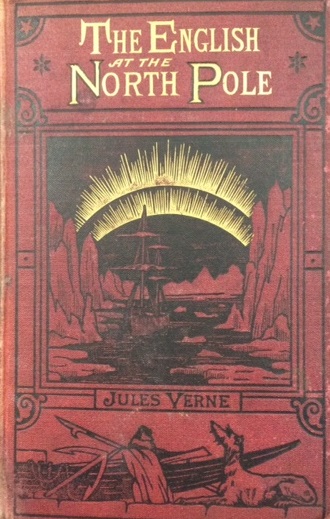 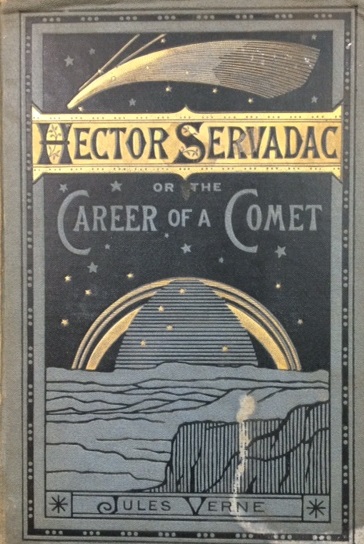 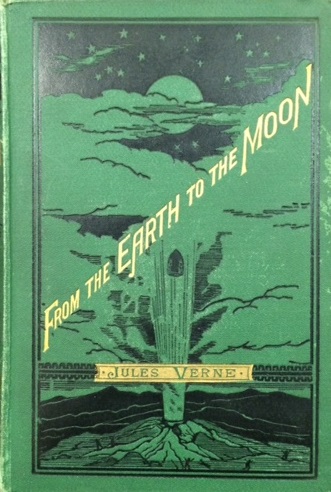 From The Earth to the Moon: Direct in 97 hours 20 Minutes and A Trip Around It. 6th ed. Trans. Louis Mercier and Eleanor E. King. London: Sampson Low, Marston, Searle & Rivington, 1881. Pictorial binding in green and gold. 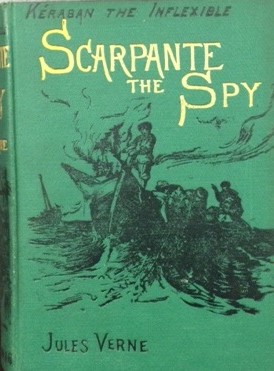 Scarpante the Spy. Illustrated. London: Sampson Low, Marston, Searle & Rivington, 1887. Pictorial binding of green and black. Kéraban The Inflexible is published in two parts. Part I is Captain of the ‘Guidara’ and part II is Scarpante the Spy. 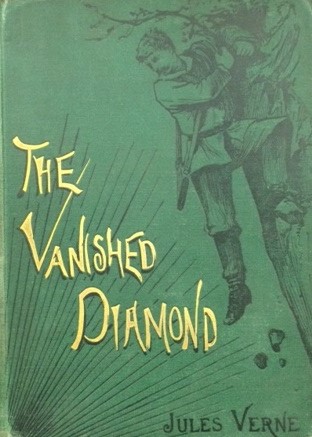 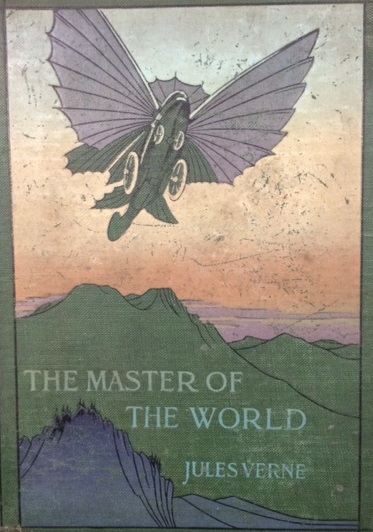 The Master of the World: A Tale of Mystery and Marvel. 1st ed. London: Sampson Low, Marston & Co., [1914]. Pictorial binding in green. 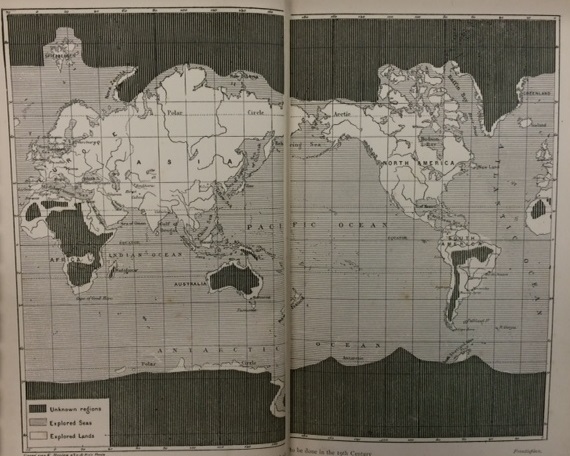 Celebrated Travels and Travellers: The Great Explorers of the Nineteenth Century. Trans. N. D’Anvers with 51 original drawings by Léon Benett, and 57 fac-similes from early mss. and maps by Matthis and Morieu. London: Sampson Low, Marston, Searle and Rivington, 1881. Pictorial binding in red and black gold binding. 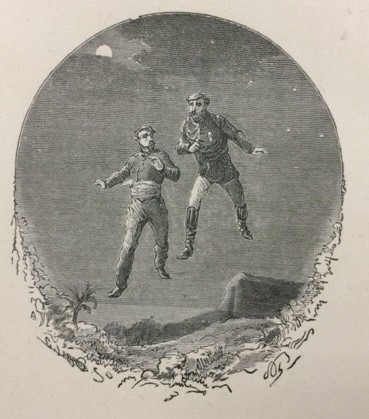 Image on the title page of Hector Servadac. 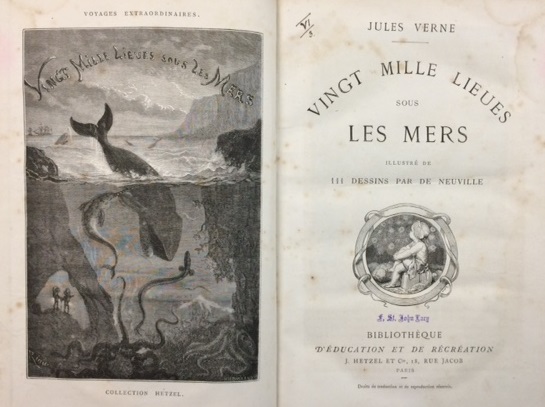 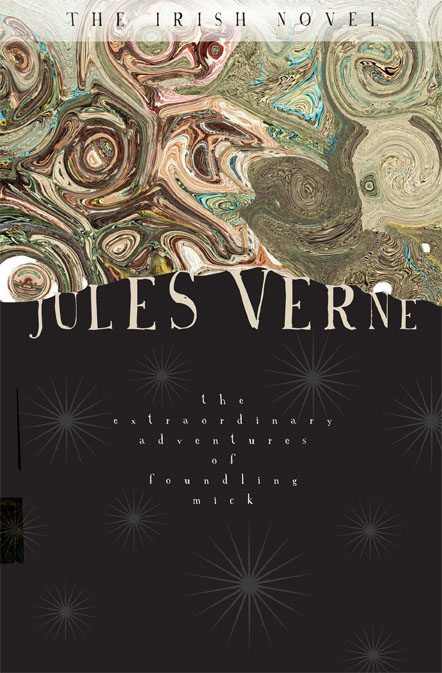 The Extraordinary Adventures of Founding Mick. First published in French as P'tit-Bonhomme (1893). First English translation published by Sampson Low, Marston & Co (1895). This edition republished by the Royal Irish Academy in 2008. 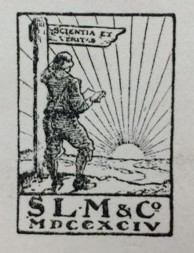 Image on the title page of Master of the World.