Life on Land: Trees and Birds from the 17th to 21st Centuries: Introduction: Case 3: Bird Species 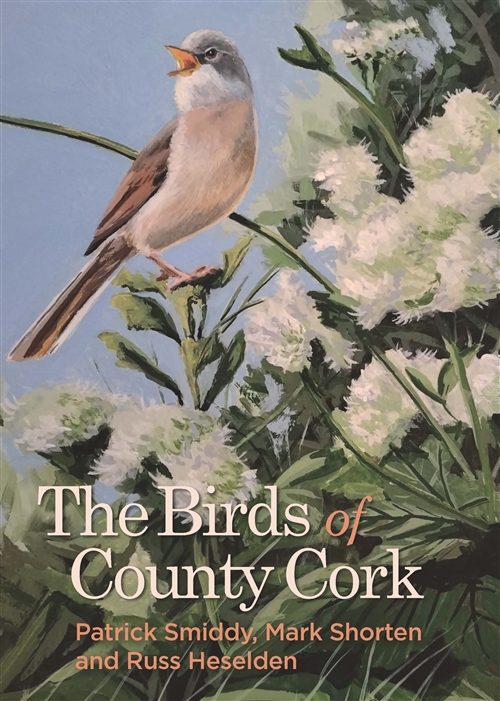 Patrick Smiddy is an honorary research associate with the Ornithology Group at University College Cork. He has published widely, having written several book chapters as well as a considerable number of scientific papers. A former member of the Irish Rare Birds Committee and editor of the journal Irish Birds, Patrick retired from the National Parks and Wildlife Service in 2008 but continued to work in wildlife consultancy. He has wide experience of Irish ornithology spanning 50 years. Mark Shorten has partaken in numerous ornithological surveys, former editor of the Cork Bird Report and has been the Cork County bird recorder since 1990. Russ Heselden has been an active birder for over forty years. He gained his PhD from University College, Cork and is a former editor of the Cork Bird Report.

The Birds of County Cork (2022) is a history of the birds of County Cork from the earliest times to the present. It provides a comprehensive account of the ecology of all species known to have occurred in the county, with an emphasis on distribution, population change and migration. There has been no tradition in Ireland for the publication of county avifaunas, as has been the case in the UK for over 200 years; while this is not the first such book for Ireland, no previous publication treats each species in such depth. This sets it apart as unique in an Irish context.

The publication of this book is timely. Bird populations across Ireland are undergoing change at a rate never previously experienced. On the one hand there are major conservation efforts to restore ‘lost’ species, such as the two eagle species and the Red Kite; on the other climate change is driving unprecedented declines in many bird populations while also allowing colonisation by new breeding species. The Birds of County Cork contains introductory chapters on the Cork environment, a history of ornithology and ornithologists within the county, an account of research and monitoring and a summary of recent changes in population status. However the bulk of the book is taken up with a Systematic List of the 427 bird species on the county list. There are also several detailed appendices including a list of place names which will enable the reader to locate any place mentioned in the text. Maps show the main sites within the county, both coastal and inland, as well as geology and land use. The book is generously illustrated with graphs, tables, photographs and paintings.

This milestone publication is an essential reference for students of ornithology, conservation agencies, planners, environmental consultants, farmers, industrialists and the growing band of citizen scientists at a time of considerable change. 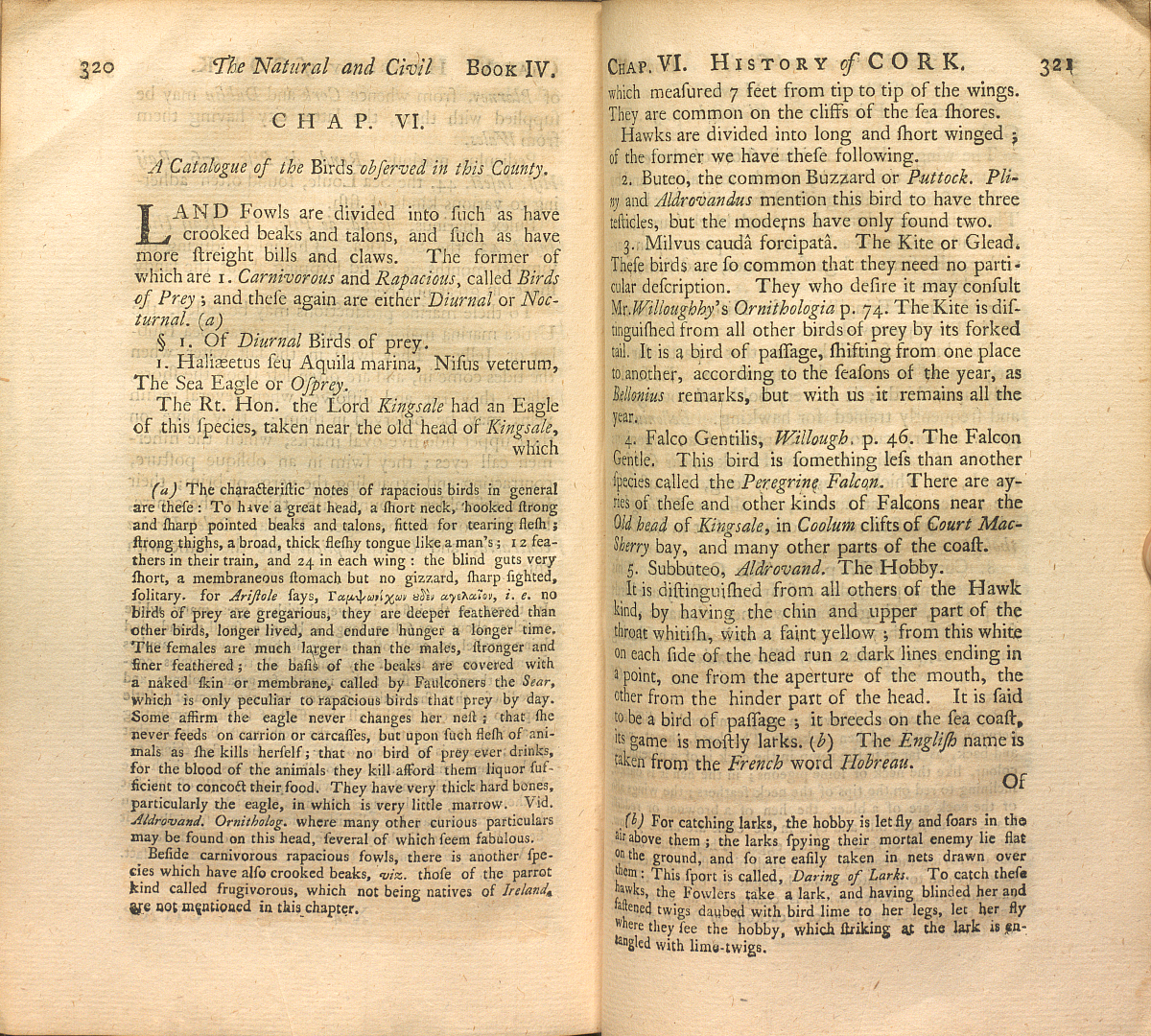 Smith, Charles. The antient and present state of the county and city of Cork. Dublin : Printed by A. Reilly for the author, 1750. [Cooke Library]

Charles Smith (1715?–1762) was an Irish apothecary, topographer, and writer, born in Co. Waterford. He was educated in medicine and practiced as an apothecary in Lismore and Dungarvan, Co. Waterford. He is best remembered as a pioneer of Irish topography and local history. His earliest work, The antient and present state of the county of Down (1744), was the first thorough history of an Irish county. He subsequently published accounts of Co. Waterford (1746), Co. Cork (1750), and Co. Kerry (1756).

The antient and present state of the county and city of Cork is divided into four books. The fourth book focuses on the natural history of the county and includes 'A Catalogue of the Birds observed in this County'. Smith's work is one of the earliest general works to provide a detailed (if incomplete) account of the different species found in the county. 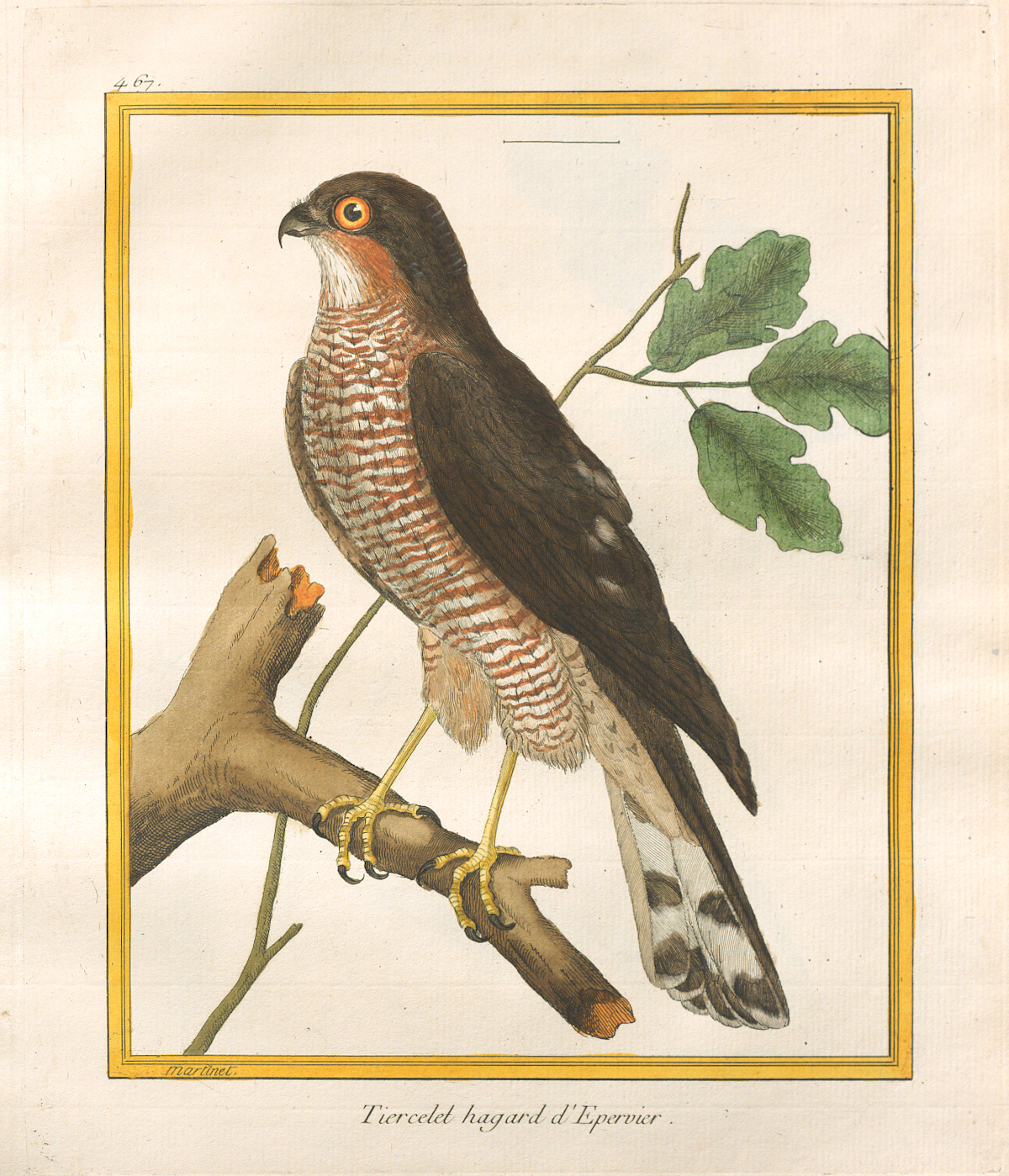 Georges-Louis Leclerc, Comte de Buffon (1707-1788) was a French naturalist. He is best remembered for his 36-volume encyclopaedia of natural history, Histoire naturelle, générale et particulière (1749-1804). The encyclopaedia was met with great success and has since been translated into several other languages, including English. The Histoire naturelle includes 9 volumes on birds titled Histoire naturelle des oiseaux (1770-1783). The colour illustrations are by François-Nicolas Martinet (1731-1800).

The sparrowhawk is the most common bird of prey in Ireland. It nests in trees and is most often found breeding in woodland areas, including farmland with woods, or larger parks and gardens. It will venture into urban areas and can be spotted flying over Cork City. It has been found breeding on the North Mall Campus of UCC. 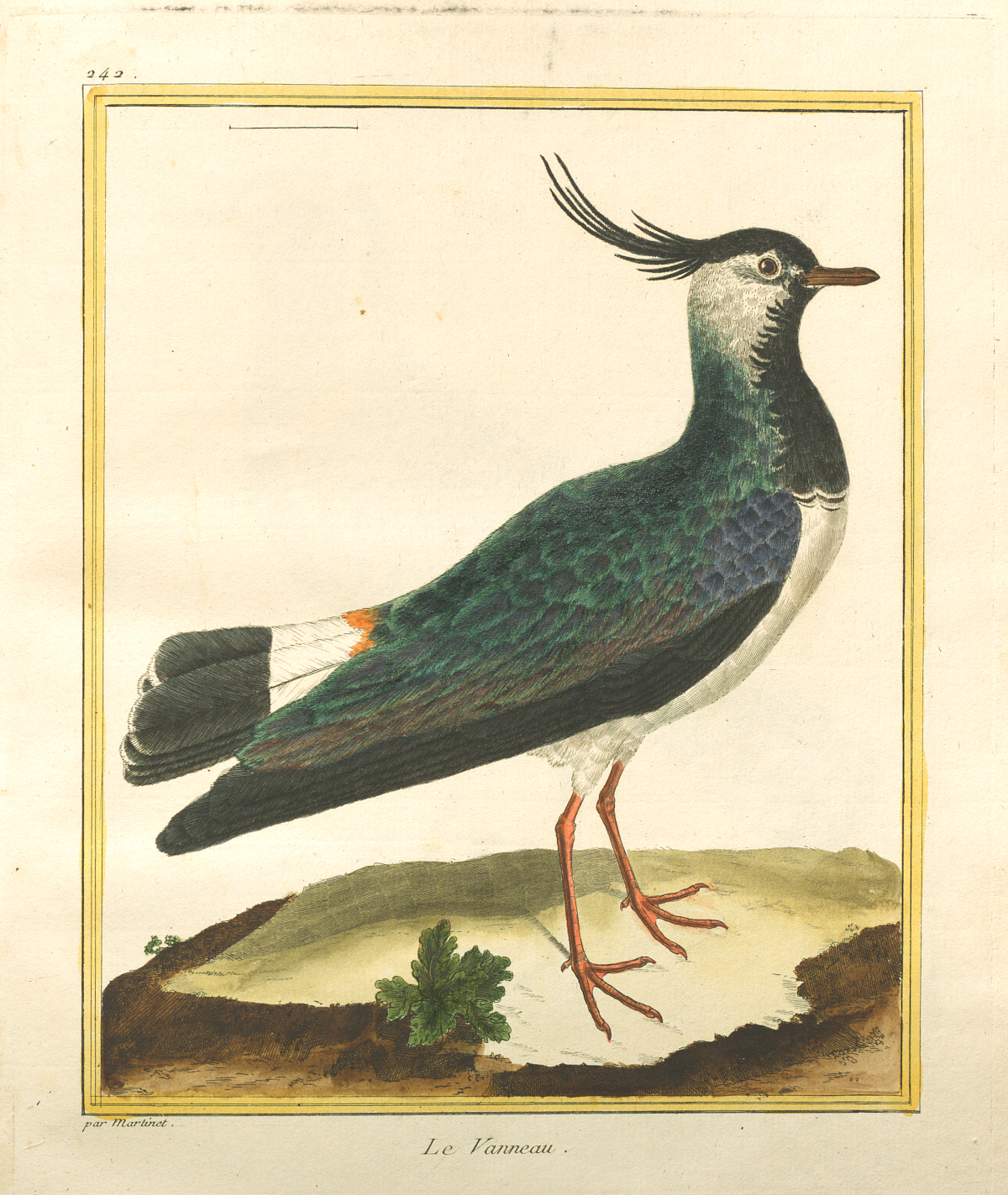 The Lapwing is a common resident and winter visitor to Ireland, breeding primarily in open farmland. It is a black-and-white wader, with a green and purple iridescent back and a distinctive wispy crest. Like many other ground nesting birds in Ireland, it has undergone a severe population decline in recent decades and is currently a red-listed species (of high conservation concern). 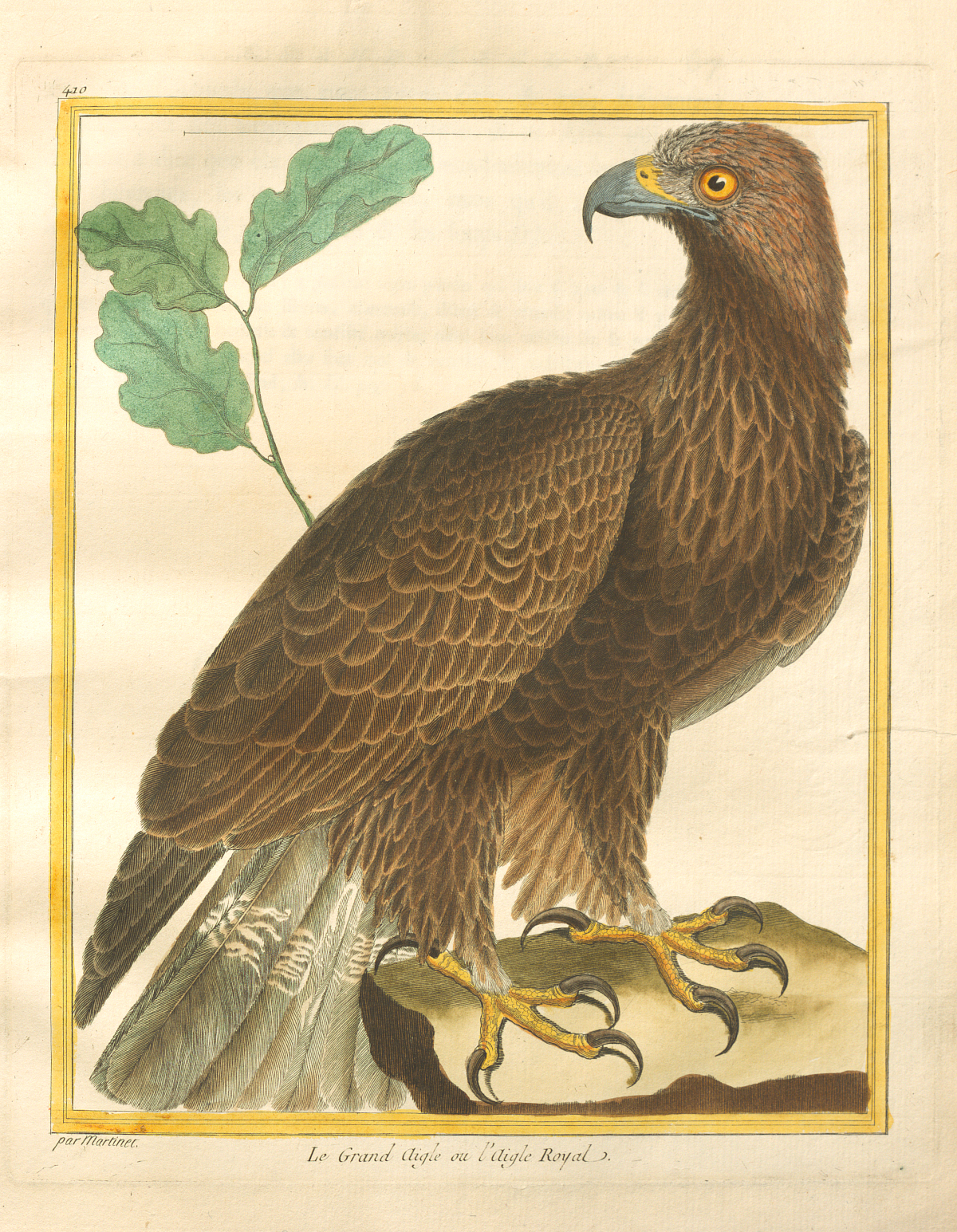 The Golden Eagle is Ireland's second largest bird of prey. It can be identified by its dark brown plumage, with a golden sheen on the back of its head and neck. Once widespread in Ireland, it was extirpated by the early 20th Century. It was re-introduced in County Donegal in 2001 but has faced significant challenges in terms of repopulation. Human threats include poisoning, shooting, and wind turbines, with other threats including storms, starvation, and avian flu. 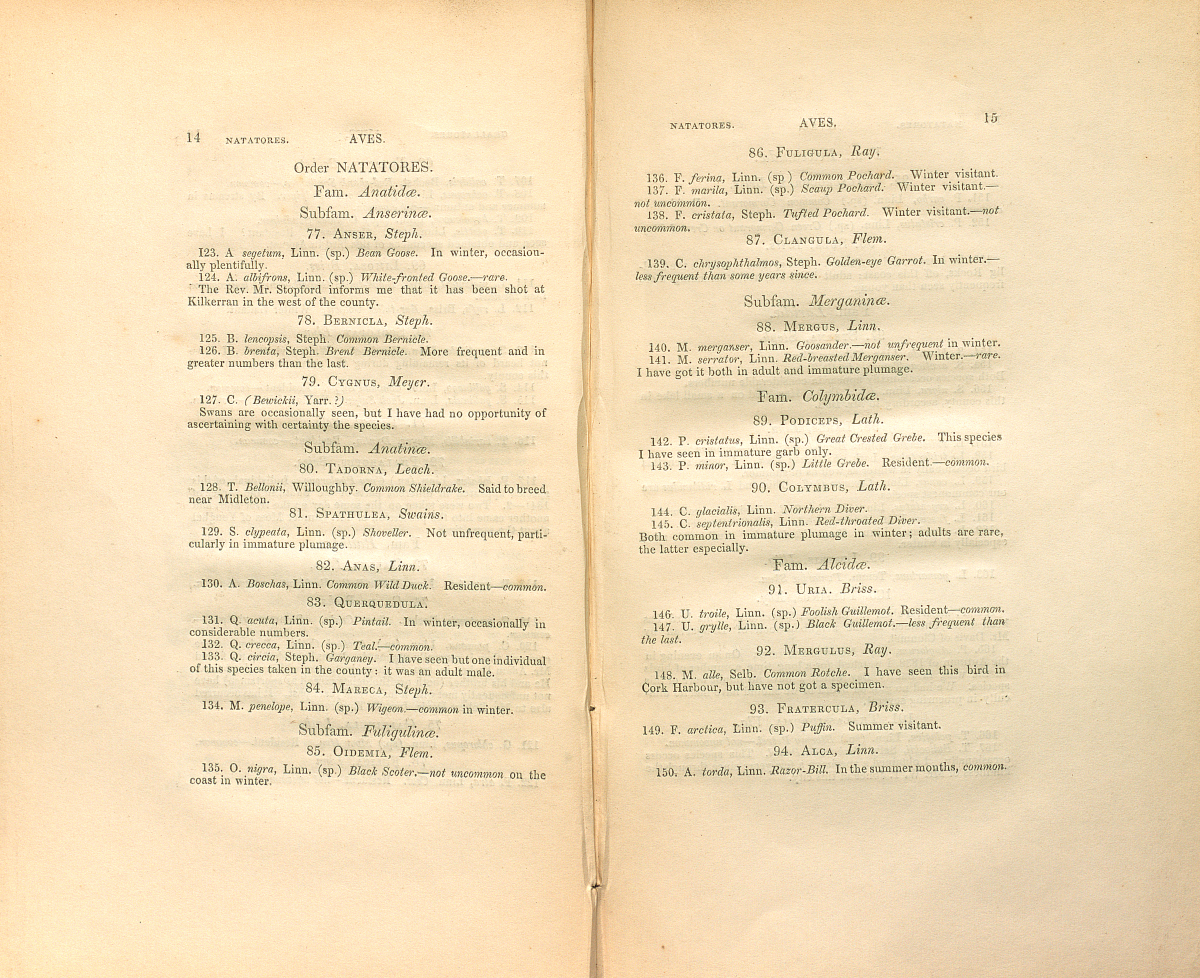 Joshua Reuben Harvey (1804–87) was an Irish physician and naturalist, born in Cork. He was appointed the first chair of midwifery at Queens College Cork (now University College Cork) in 1849. He compiled the list of birds for Contributions towards a fauna and flora of the county of Cork (1845), which was prepared for the meeting of the British Association for the Advancement of Science held in Cork in 1843. The first catalogue of the vertebrates of County Cork, it was published by the Cuvierian Society of Cork in 1845, with a revised version published in 1875. On his retirement in 1878, Harvey presented his natural history collection to the college, which included more than 350 specimens of native Irish wild birds. 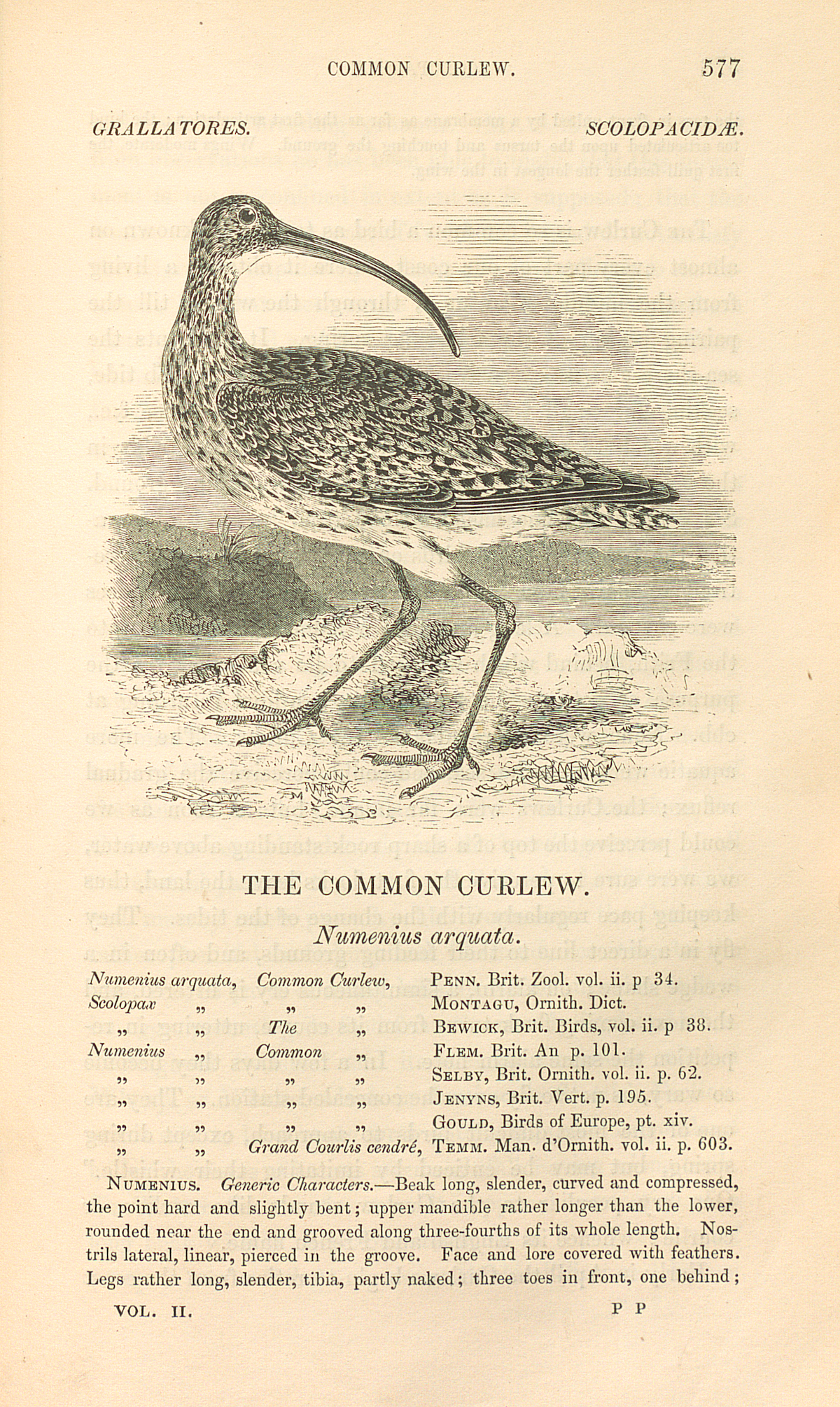 William Yarrell (1784–1856) was an English bookseller, zoologist, and naturalist, best known for The History of British Fishes (1836) and A History of British Birds (1843). The latter volume is a handbook containing an entry for every known species of bird in Britain. Admired for its scientific accuracy, it became the standard reference work for British ornithologists.

The Curlew is a winter visitor to wetlands throughout Ireland. It is Ireland's largest wader and can be distinguished by its long legs and neck, and bulky greyish brown body. According to BirdWatch Ireland, the numbers of this red-listed species have declined substantially in recent decades, likely due to increased afforestation and agricultural intensification. It is an occasional visitor to the UCC Campus. 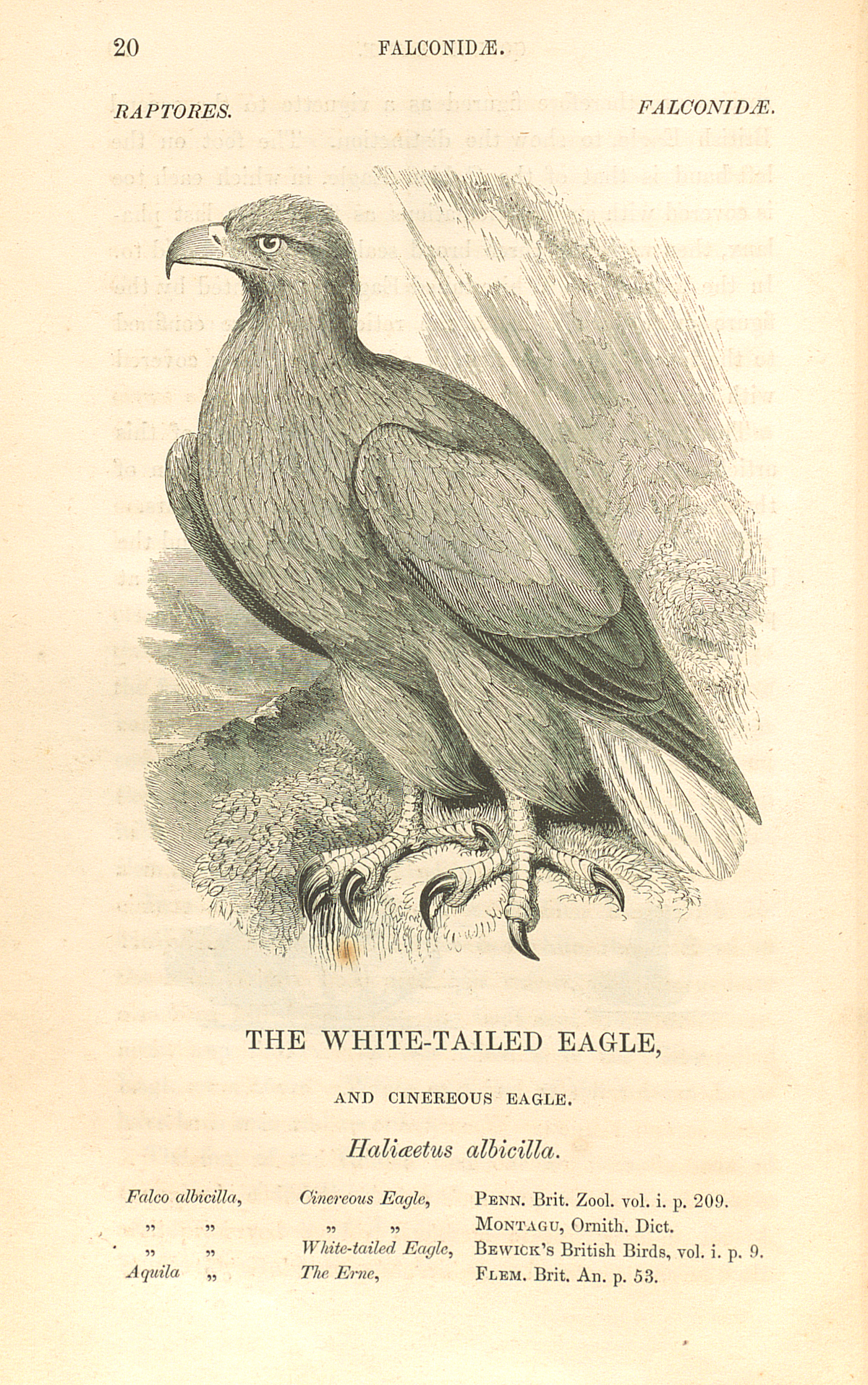 The White-Tailed Eagle was a widespread breeding species along Irish coasts until the early 20th century. It was first re-introduced at Killarney National Park in 2007, with subsequent sites including Glengarriff and Lough Derg. It is the largest bird of prey in Ireland with a wingspan of up to 2.4 metres. In terms of repopulation, it has faced similar threats to the Golden Eagle. 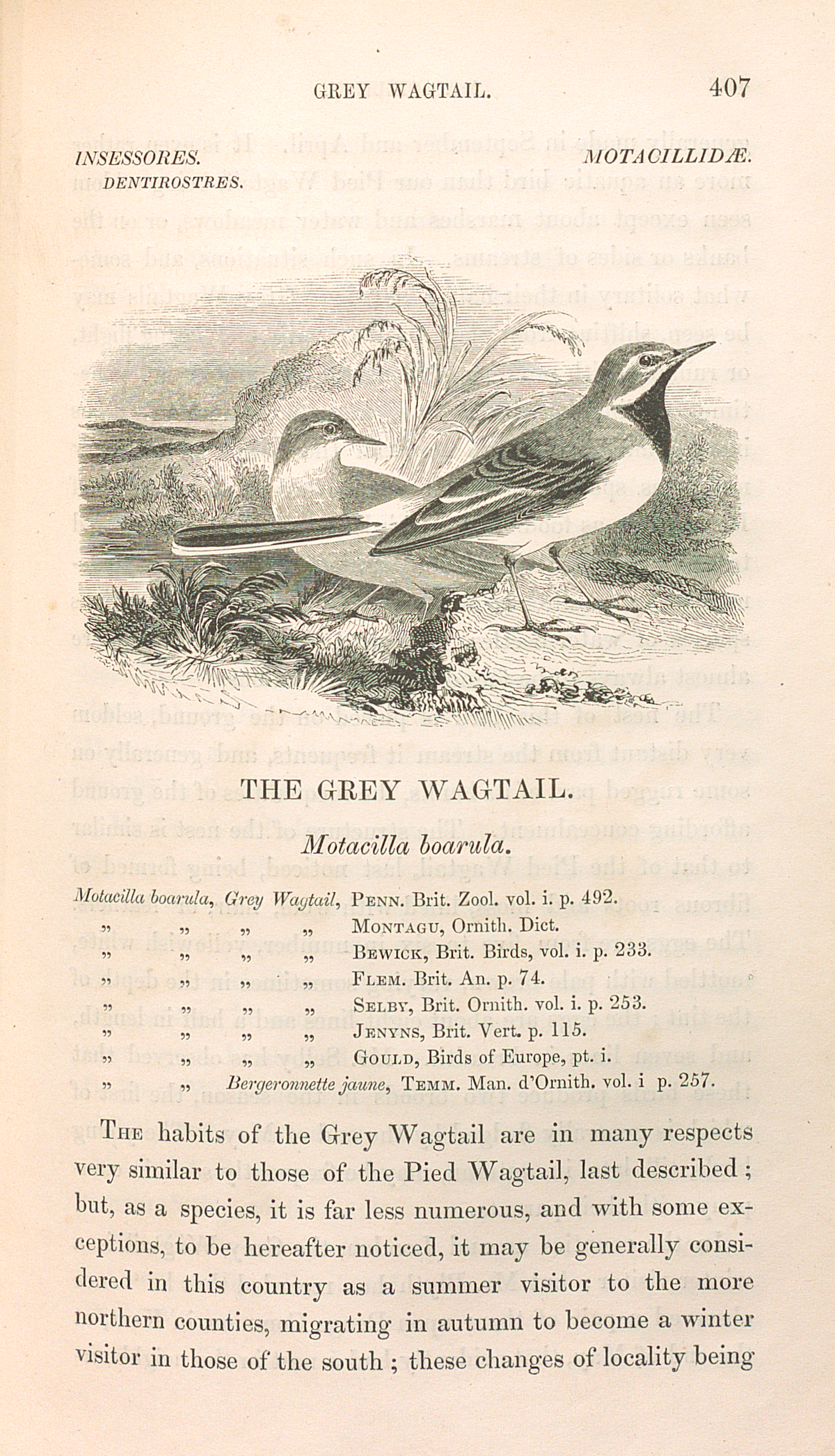 The Grey Wagtail is a widespread resident along fast flowing streams and rivers throughout Ireland. It is a striking bird, with a dark grey head and back and bright yellow on its underside. Though less common than the Pied Wagtail, this red-listed species has been observed on the River Lee on the Main UCC Campus. 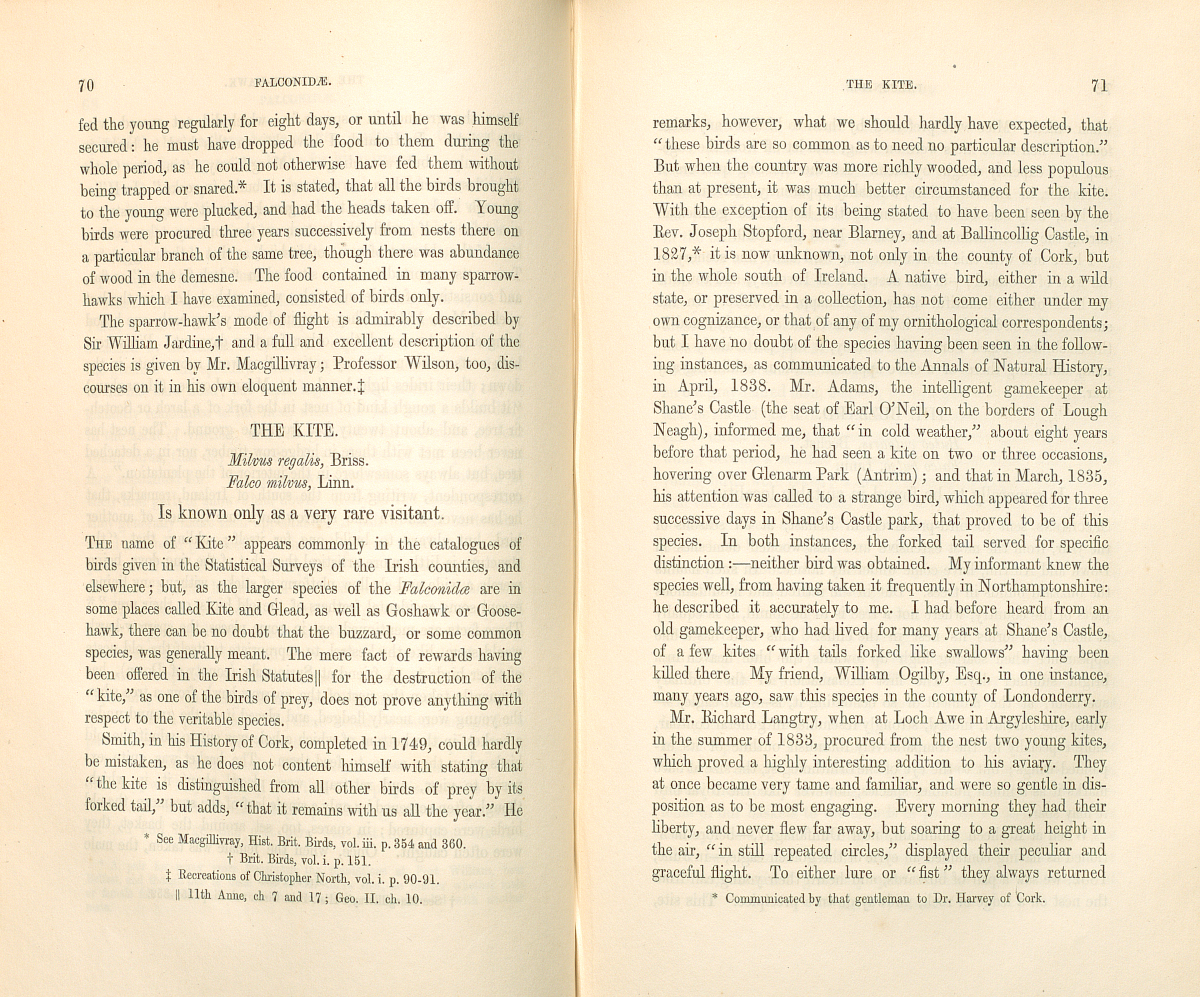 William Thompson (1805–52) was an Irish naturalist born in Belfast. The son of a wealthy linen merchant, he was able fund his own research. He is recognised as a pioneer in the study of the natural history of Ireland, particularly in the fields of ornithology and marine biology. His most notable work is his four-volume The Natural History of Ireland (1849-56), with the first three volumes focusing on the birds of Ireland. It is the first extensive work on the topic. Cork born naturalists Robert Ball (1802-57) and Robert Warren (1829-1915) contributed information on the birds of Cork. 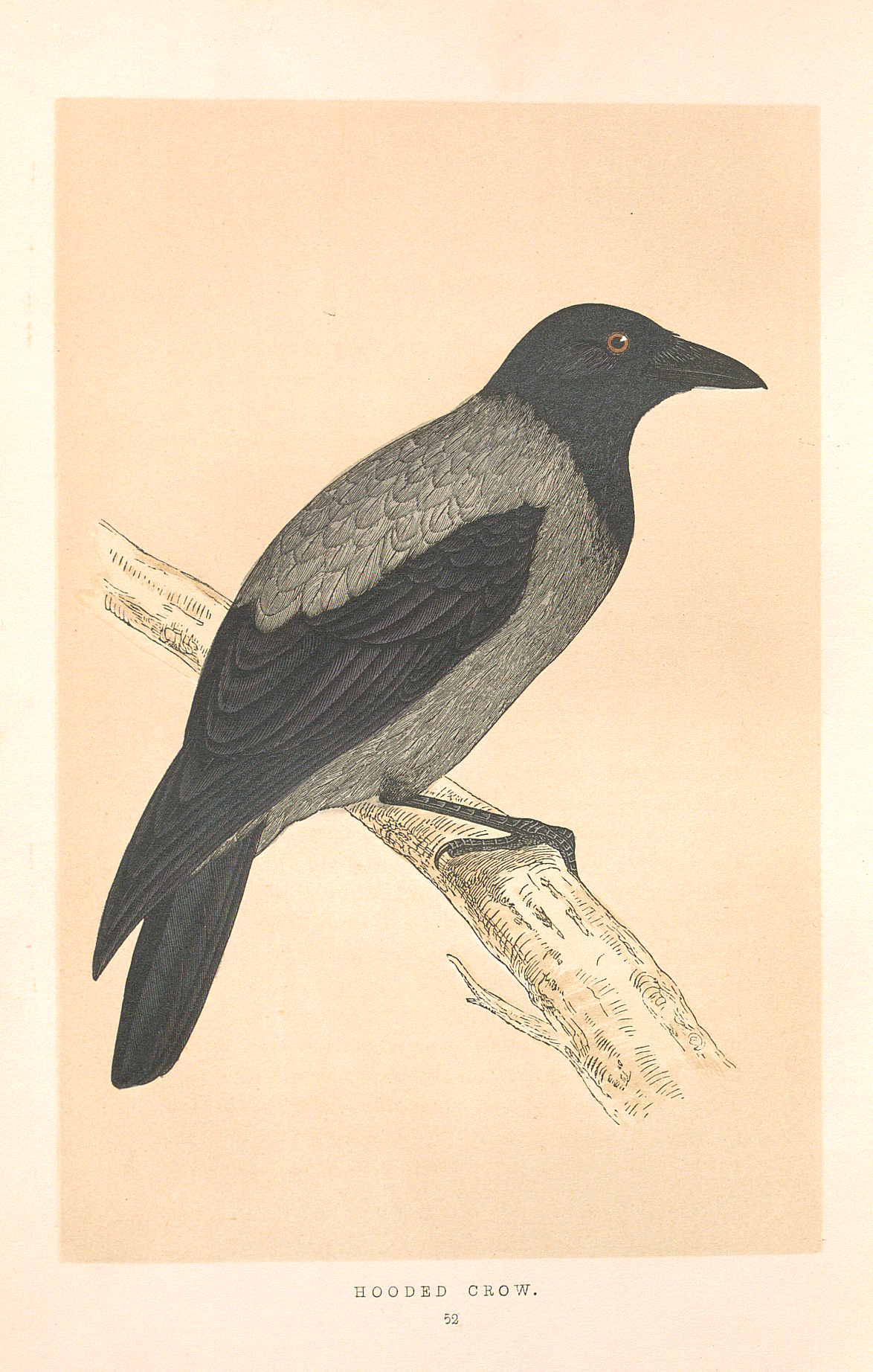 Francis Orpen Morris (1810–1893) was an Irish clergyman and naturalist, born in Cobh, County Cork. He wrote extensively on religious and ecclesiastical topics but is best remembered for his works on natural history. His six volume A History of British Birds (1851-57) was aimed at a popular, rather than scientific, audience and became a best-seller. As with the Histoire naturelle, the entry for each bird is accompanied by a colour illustration.

The hooded crow is a common resident throughout Ireland and breeds in most habitats. In Irish mythology it appears as a manifestation of the Morrígan, a deity associated with war. Along with its fellow crows – the rook, jackdaw, and magpie – it is a regular visitor to the UCC Campus. 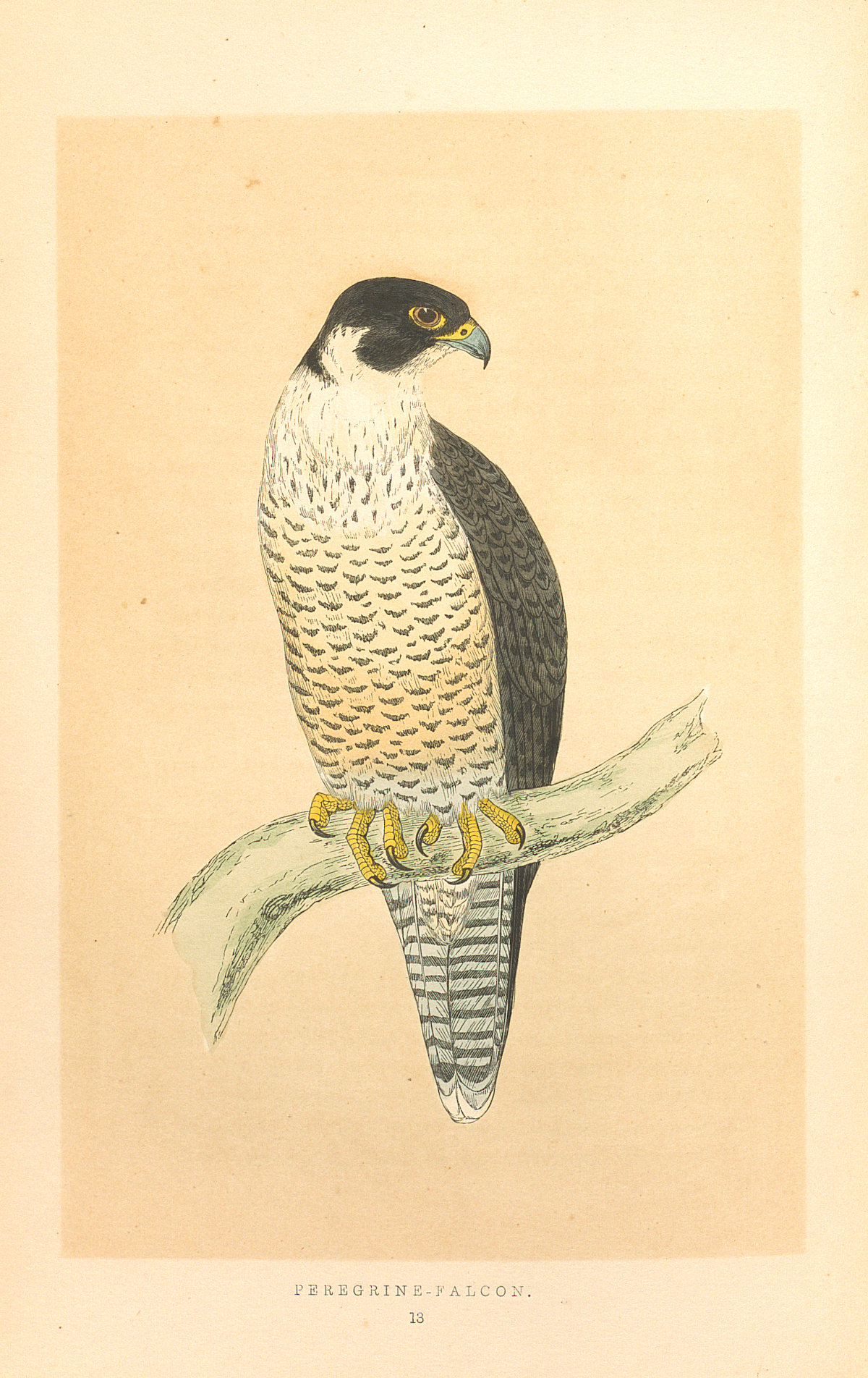 The Peregrine Falcon is a widespread resident in Ireland, mainly in coastal and mountainous regions. The population of this bird of prey was heavily impacted by the widespread use of DDT and other pesticides in the mid-20th century. Since the banning of such chemicals, its population has made a significant recovery. It has been found breeding in Cork City and is an occasional visitor to the UCC Campus. 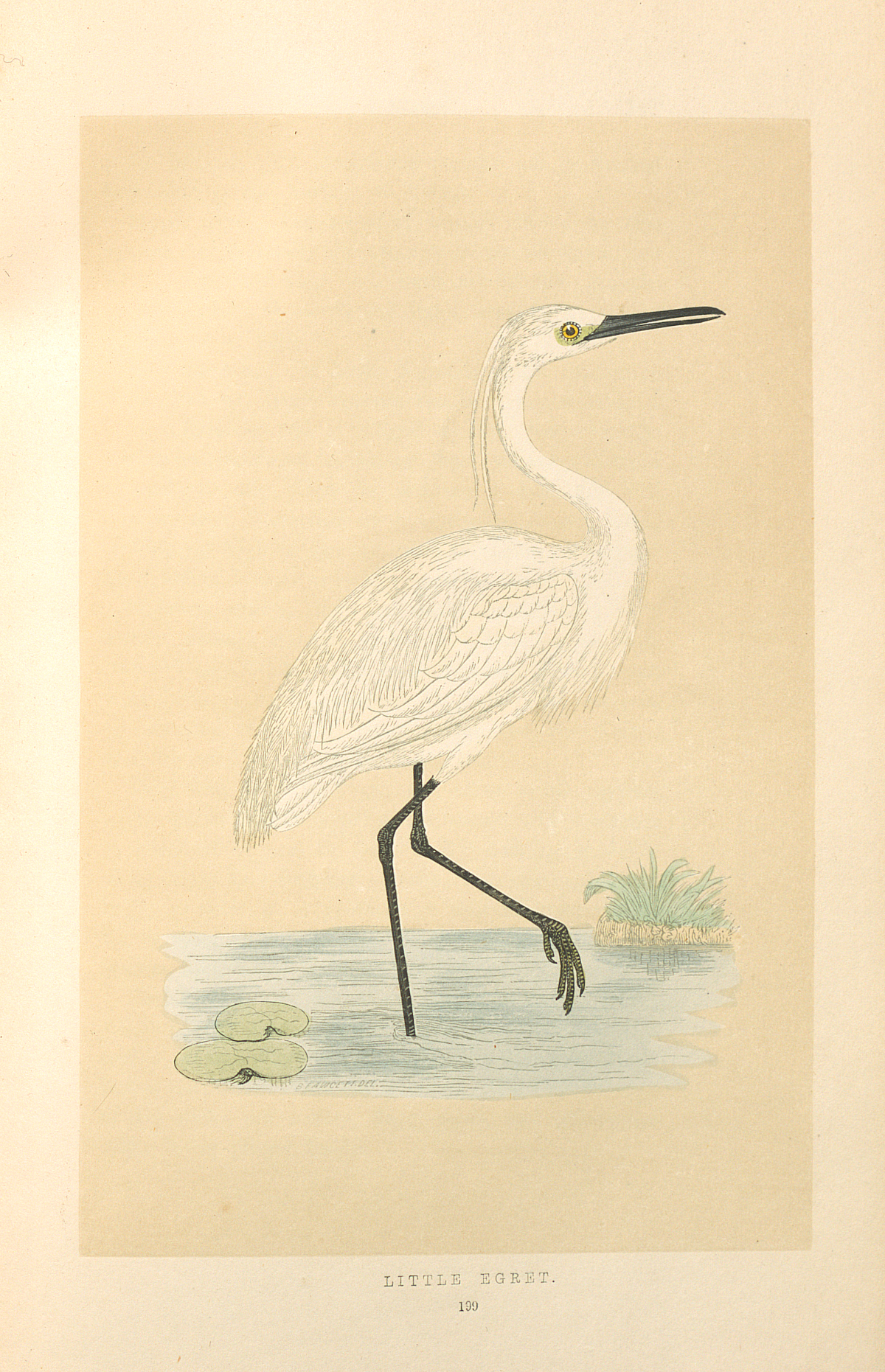 The Little Egret is a resident along coasts and rivers throughout Ireland. It is a medium-sized white heron, with long black legs, yellow feet, and a black bill. According to BirdWatch Ireland, it was rare in Ireland until it first started breeding here in late 1990s. It now appears in almost every coastal county and at some inland sites. They are becoming more common along the River Lee in Cork City and have been spotted on the UCC Campus. 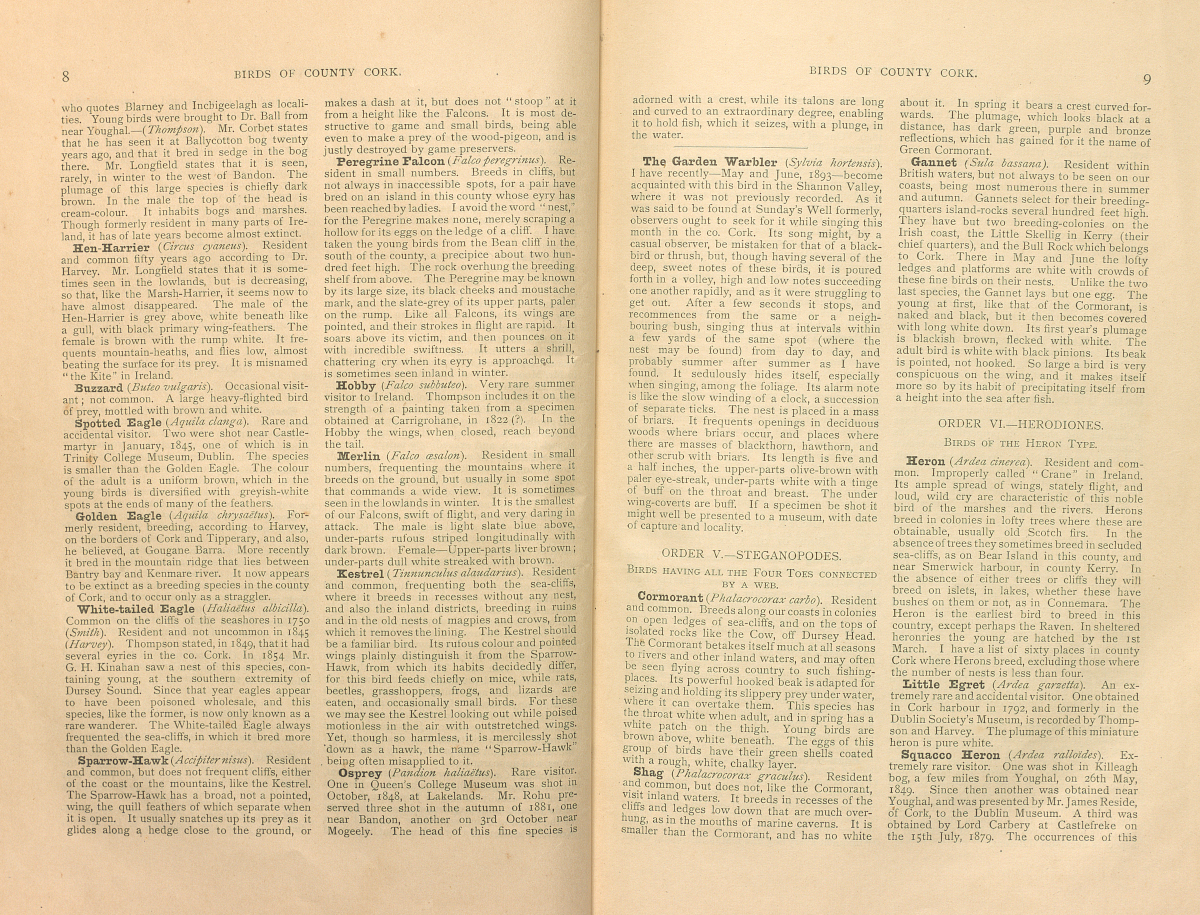 Richard John Ussher (1841-1913) was an Irish ornithologist and speleologist born in Cappagh, County Waterford. He published extensively and was one of the first contributors to the journal the Irish Naturalist. He is best known as the co-author of The Birds of Ireland (1900), along with Robert Warren, which was the standard work on the topic for many years. Prior to its the publication, he contributed a series of sixteen articles on 'Birds of County Cork' to the Journal of the Cork Historical and Archaeological Society. The articles were later published in a single volume. 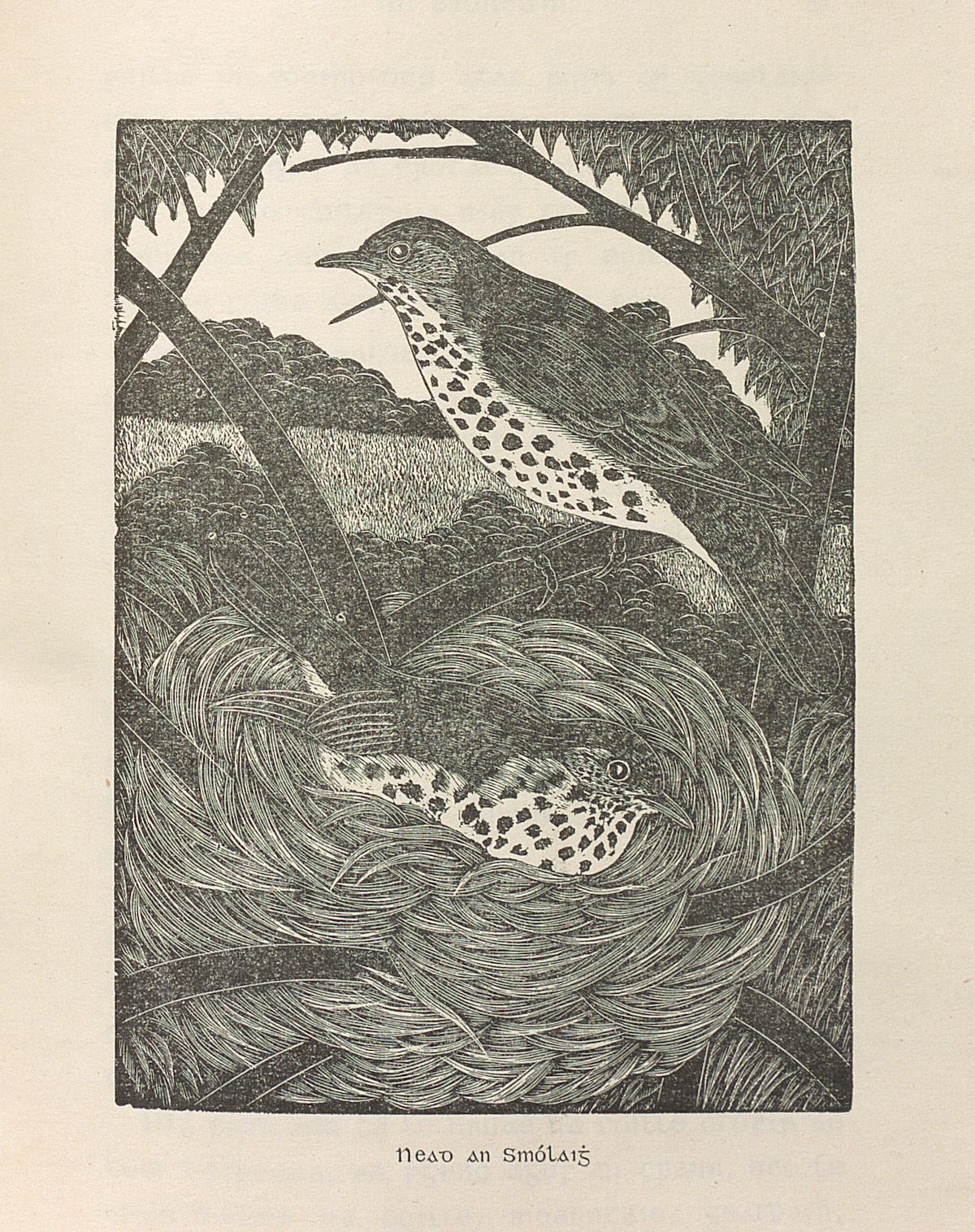 Seán Mac Giollarnáth (1880-1970) was an Irish writer and folklorist from Gurteen, County Galway. Chiefly remembered for his collections of folklore, he also wrote works on natural history. His writings on ornithology include Saoghal éanacha (1925) and Féilire na nÉan (1940). Féilire na nÉan (Calendar of Birds) provides details of birds for each month of the year. It includes illustrations of An Meantán Mór (the Great Tit) for January; An Smólach (the Thrush) for April; An Chuacóg (the Cuckoo) and An Dreoilín (the Wren) for June; and An Druideach (the Starling) for September.

The Thrush is one of Ireland's most widespread garden birds. Roughly the size of a Blackbird, it can be identified by its brown colouring and speckled underparts. It is a regular visitor to UCC and has been found breeding on the North Mall Campus. 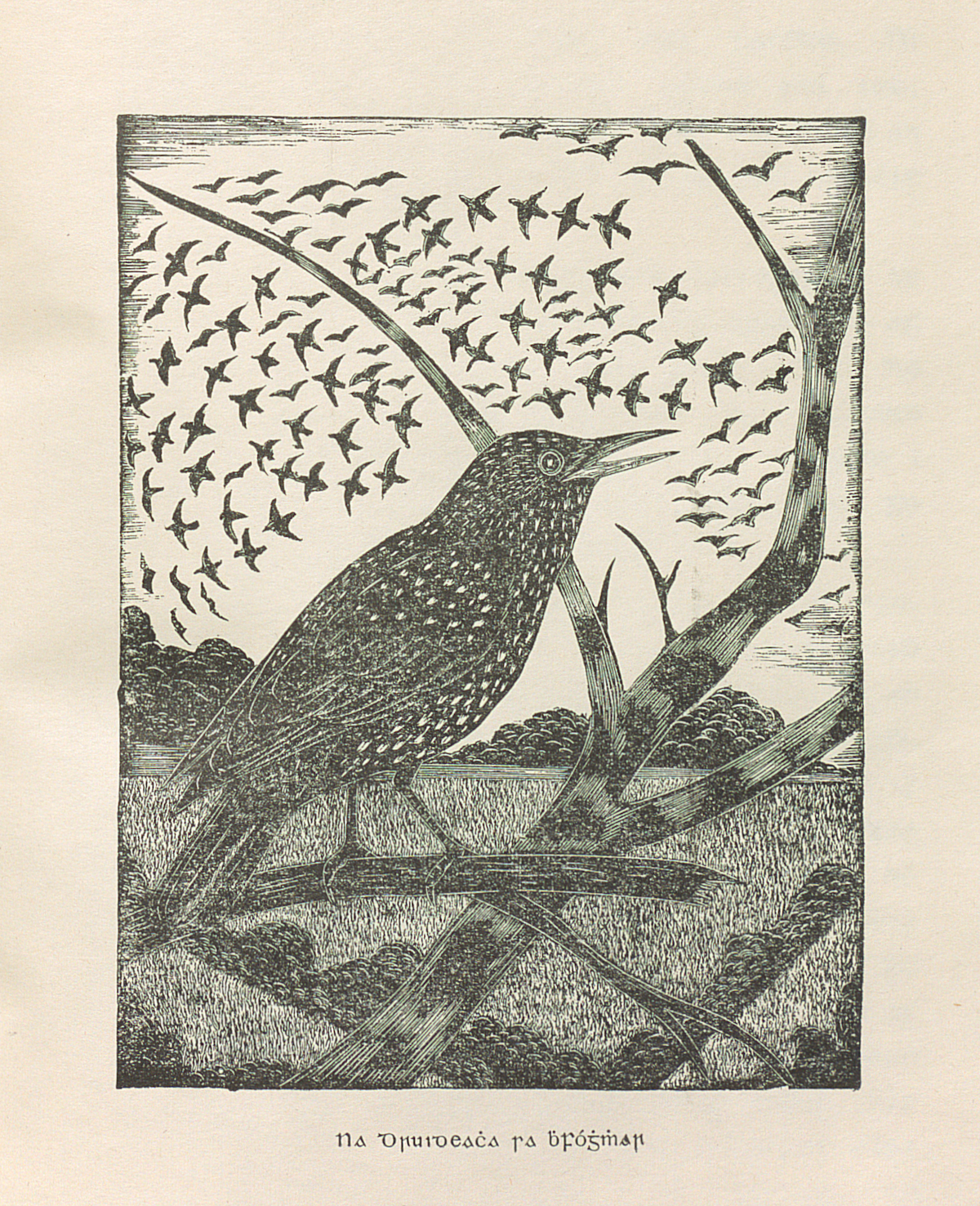 The Starling, like the Thrush, is one of Ireland's most widespread garden birds. It's a common resident across the country and can be found both in the countryside and in towns and cities. Adults have a glossy dark plumage in the summer with yellowish white spotting in the winter. It is a regular visitor to the UCC Campus.