Life on Land: Trees and Birds from the 17th to 21st Centuries: Introduction: Case 1: Tree Management 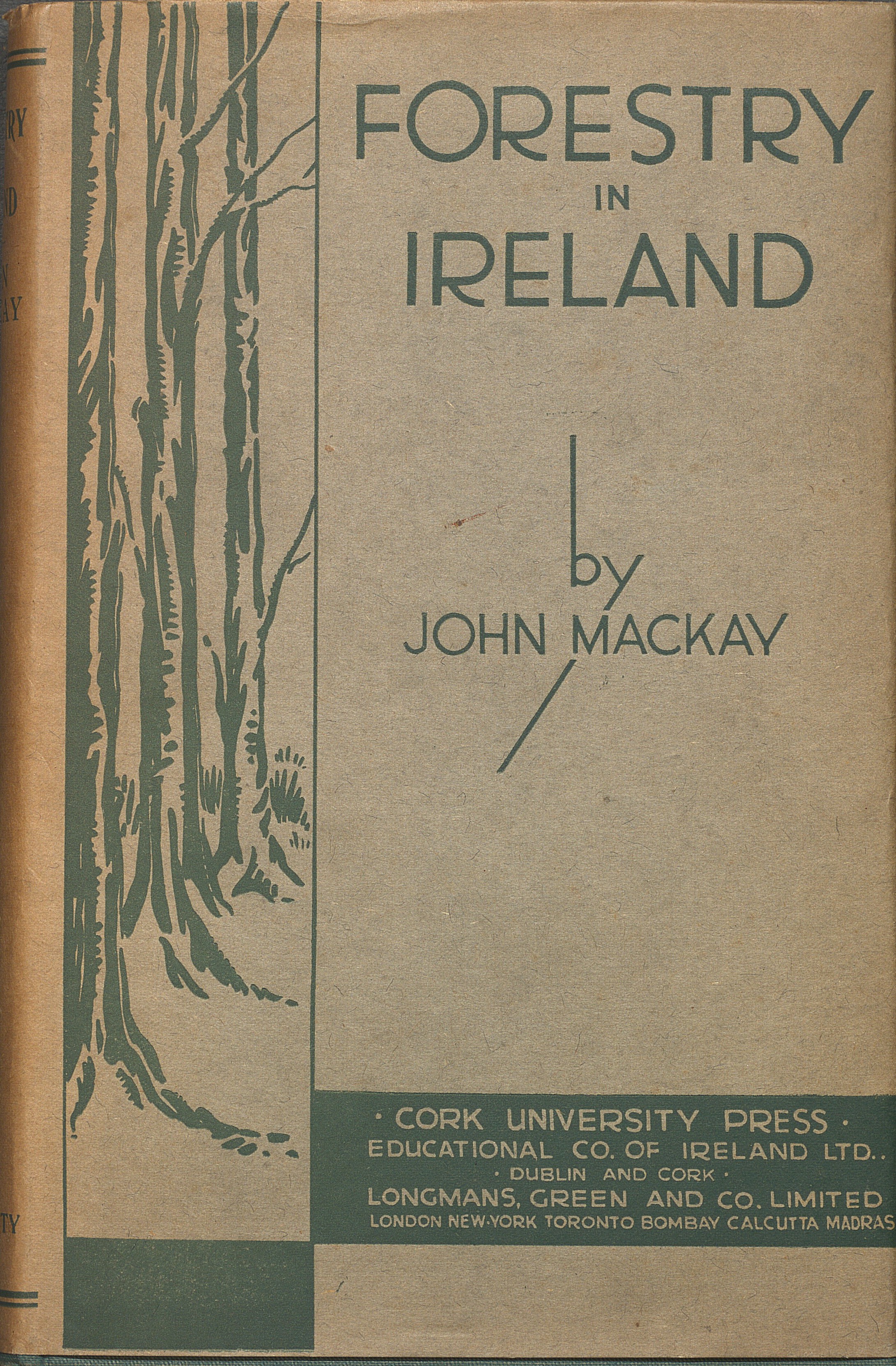 John Mackay (?-1941) resided in Dunmore East, Co Waterford and regularly lectured on Irish forestry and trees. Forestry in Ireland was one of number of books he wrote on forestry. Others included Trodden Gold (1928) and No forests - no nationhood (1939). Forestry in Ireland was especially influential as it contained 58 pages of carefully argued notes by Professor Alfred O'Rahilly of UCC, setting out basic facts on Irish forestry: O'Rahilly's notes are on pp 131-88. 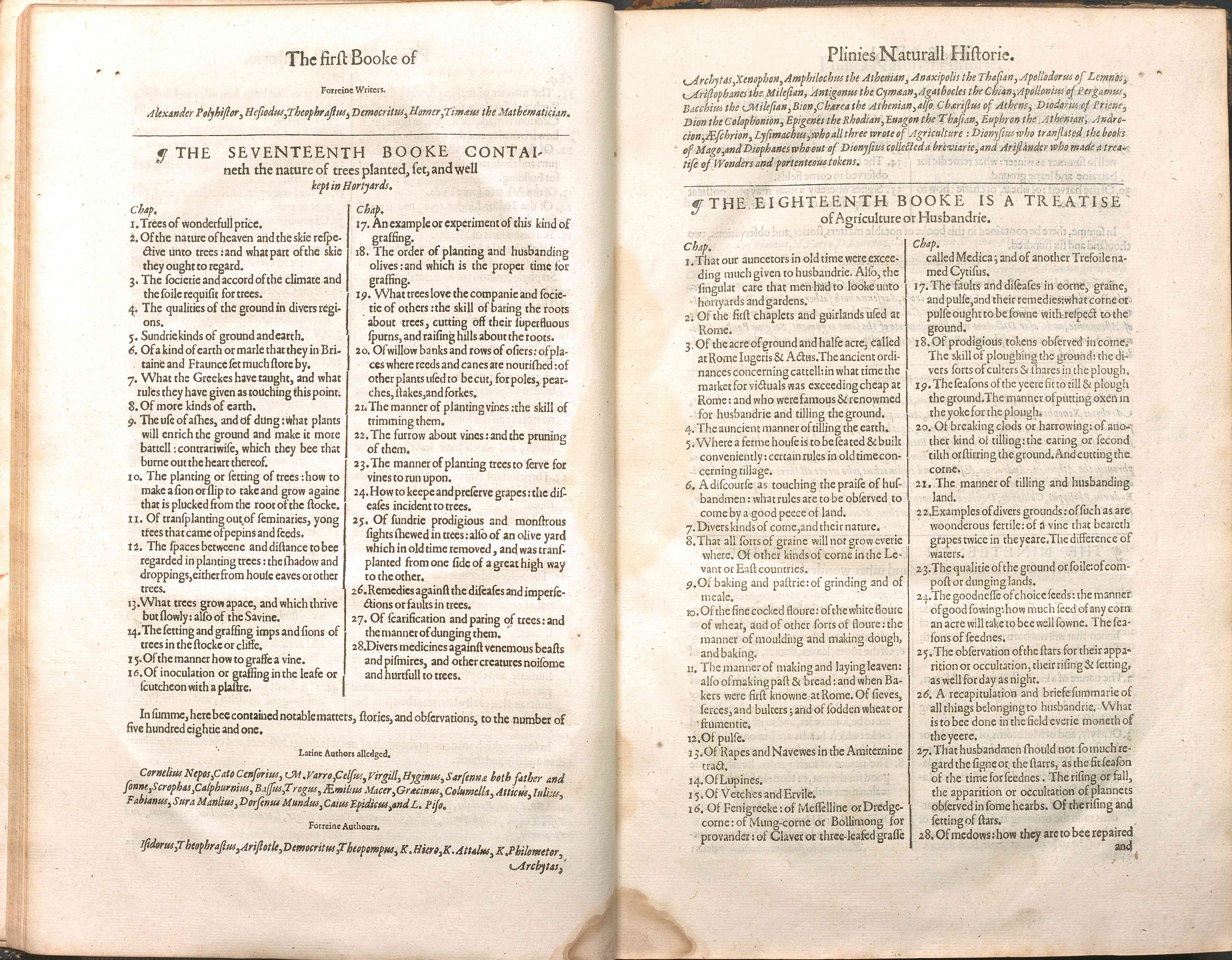 Pliny, the Elder. The historie of the world: commonly called the natvrall historie of C. Plinivs Secvndvs. / Trans. into English by Philemon Holland. London: A. Islip, 1601. [Older Printed Books Collection]

Pliny the Elder (23-79) wrote his best known work The historie of the world sourcing content from other ancient writers. The historie of the world is the largest single surviving work from Roman times and the only surviving work by Pliny. The content is encyclopedia in scope in that it is not limited to natural history alone but also includes astronomy, mathematics, geography, ethnography, anthropology, human physiology, zoology, botany, agriculture, horticulture, pharmacology, mining, mineralogy, sculpture, art, and precious stones.  However it is not encyclopedia in structure as it is instead divided into 37 books. Pliny had published the first 10 books in 77CE, but following his death during the AD 79 eruption of Vesuvius, his nephew Pliny the Younger published the remainder.

This is the first printing of Holland's The historie of the world. There was a second printing in 1634. 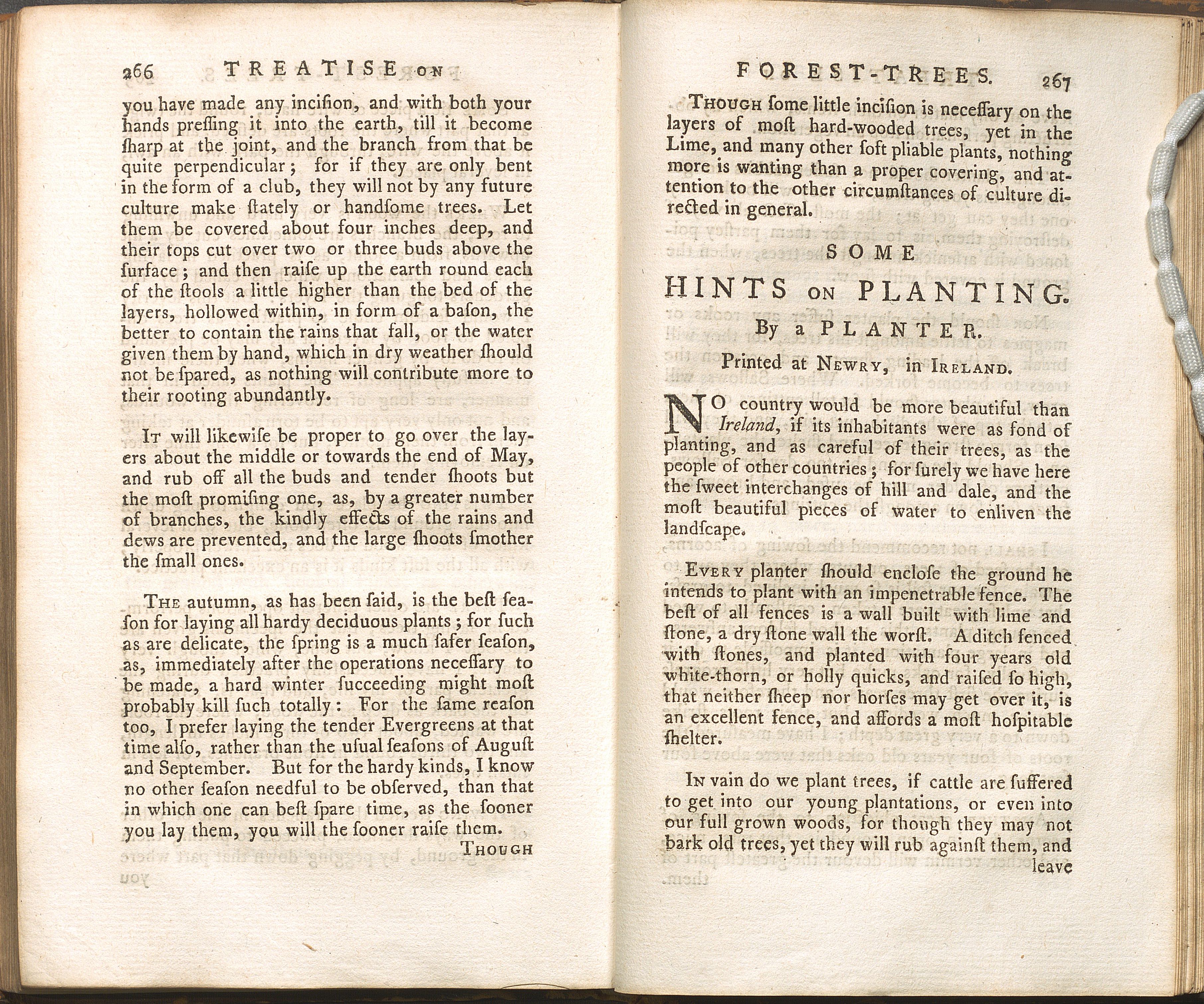 Boutcher, William. A treatise on forest-trees: containing not only the best methods of their culture hitherto practised, but a variety of new and useful discoveries ... as also plain directions for removing most of the valuable kinds of forest-trees ... and ... for transplanting ... disposition, planting and culture of hedges ...  Dublin: Printed for William Wilson and John Exshaw, 1784. [Older Printed Books Collection]

William Boutcher (fl. 1734-1781) was an active nurseryman and gardener from Comely-Garden in Edinburgh. The Treatise on Forest-Trees is a work born of real experience in the cultivation and maintenance of forests and hedges. In response to the practice of growing large numbers of trees on crowded plots for maximum profit, Boutcher encouraged the growth of strong, healthy trees and a general scientific approach to arboriculture. Boutcher's work is particularly Scottish: it is dedicated to the third Duke of Buccleugh, and the subscribers' list contains most Scottish noble ranks.

Boutcher transmits the sort of philosophical wisdom born of working with mighty trees: "I must lay it down as a principle, that some small degree of learning at least is necessary to make a good gardener" and "every body knows the best cook cannot furnish out of a handsome table without the assistance of a good gardener; and perhaps there is as much judgment required in raising materials of the best quality, as in dressing them well" (vii).

This is the third edition and the second Dublin edition recorded in ESTC. The first Dublin printing appeared in 1776, the year after the Edinburgh first edition in quarto. 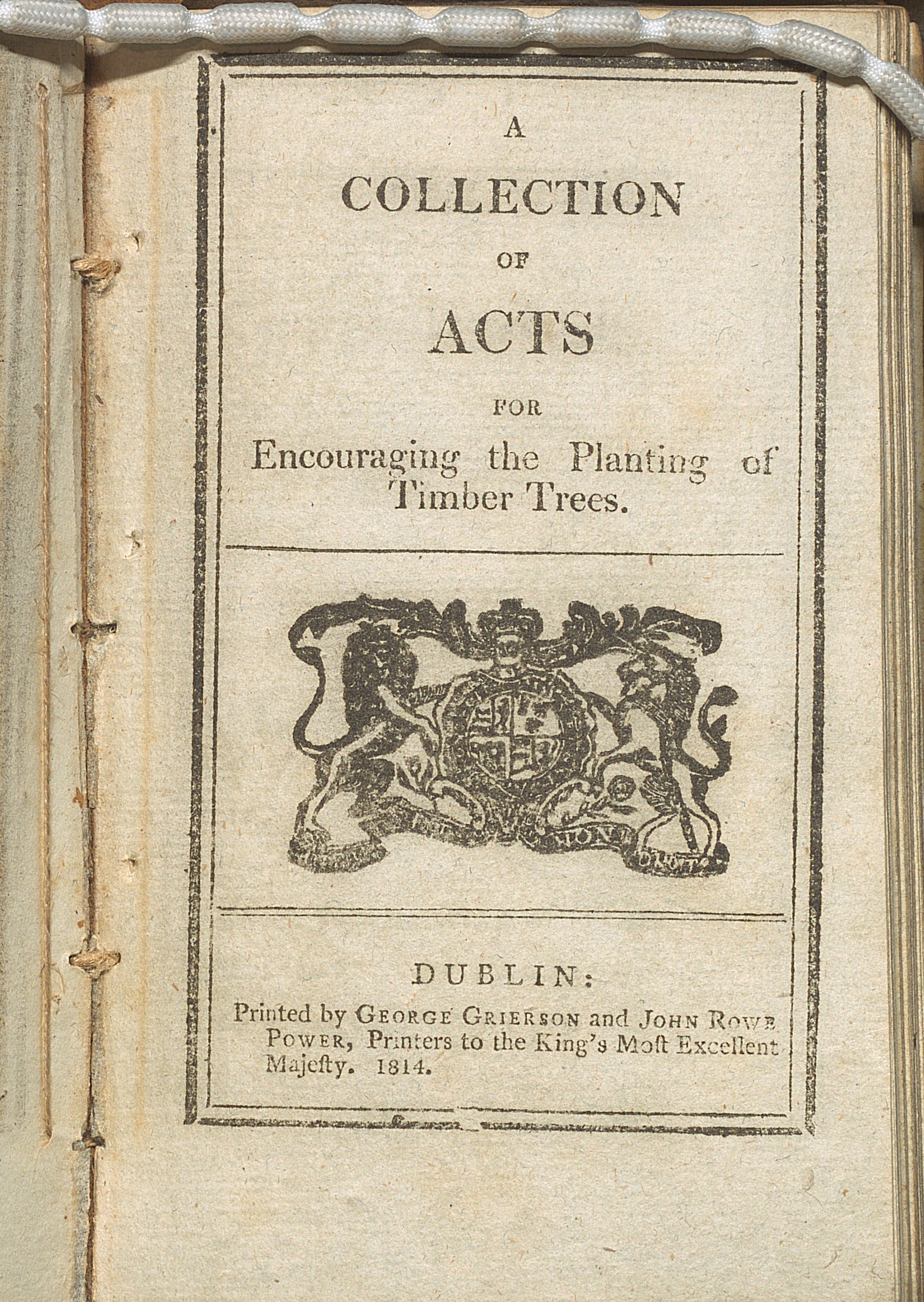 A collection of acts for encouraging the planting of timber trees. Dublin: Printed by George Grierson and John Rowe, 1814. [Older Printed Books Collection]

Between 1698 and 1791 there were a series of parliamentary acts each which progressively provided greater incentives to tenants to plant and eventually to claim ownership of the trees they planted. This was in response to the largest decline of forests and woodlands during the 17th and 18th centuries in Ireland. Factors involved in the decline were:

By the mid-18th century, there was a growing interest in Ireland in improving forestry. The Royal Dublin Society was founded in 1731 and it encouraged land improvements including planting trees in the landed estates. New landscape design styles also encouraged the planting of copses and forests framing the views of the demesnes. Following these developments, there was a modest reforestation, mostly with exotic tree species.