Life on Land: Trees and Birds from the 17th to 21st Centuries: Introduction: Case 2: Tree Species 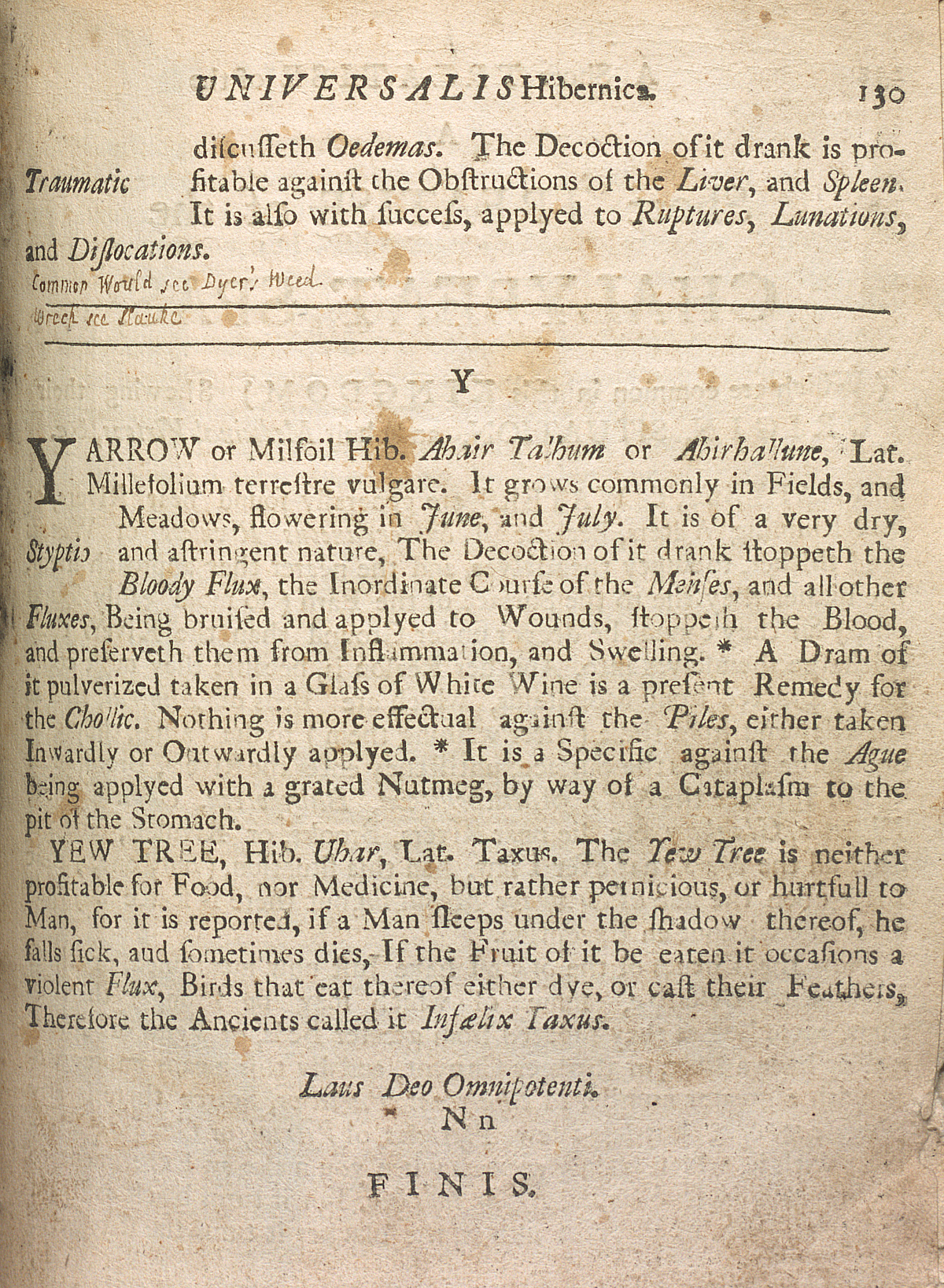 Botanalogia Universalis Hibernica, or, A General Irish Herbal Calculated for this Kingdom (1735)

John K'Eogh (c.1681–1754) was a clergyman and naturalist. He was born in Strokestown and educated by his father prior to attending Trinity in 1705. He was chaplain to the 4th Baron Kingston at Mitchelstown Castle. The Botanalogia is an alphabetical list of plants growing in Ireland, with their names given in English, Latin, and Irish. It describes the plants' medicinal properties and was based mainly on the plants grown in Kingston's garden. The work is of historical value as evidence of the plants which were cultivated at that time, which include orange and lemon trees grown in what was a very early greenhouse. The Botanalogia remained for many years as one of the standard reference works on the flora of this island.

The Yew Tree is described as "rather pernicious, or hurtful to Man, for it is reported, if a Man sleeps under the shadow thereof, he falls sick, and sometimes dies". Despite all parts of the tree being poisonous, the foliage is used for its medicinal properties. It is a small to medium size tree and is commonly seen in graveyards. A specimen can be spotted on the main UCC Campus near the Students' Union building. 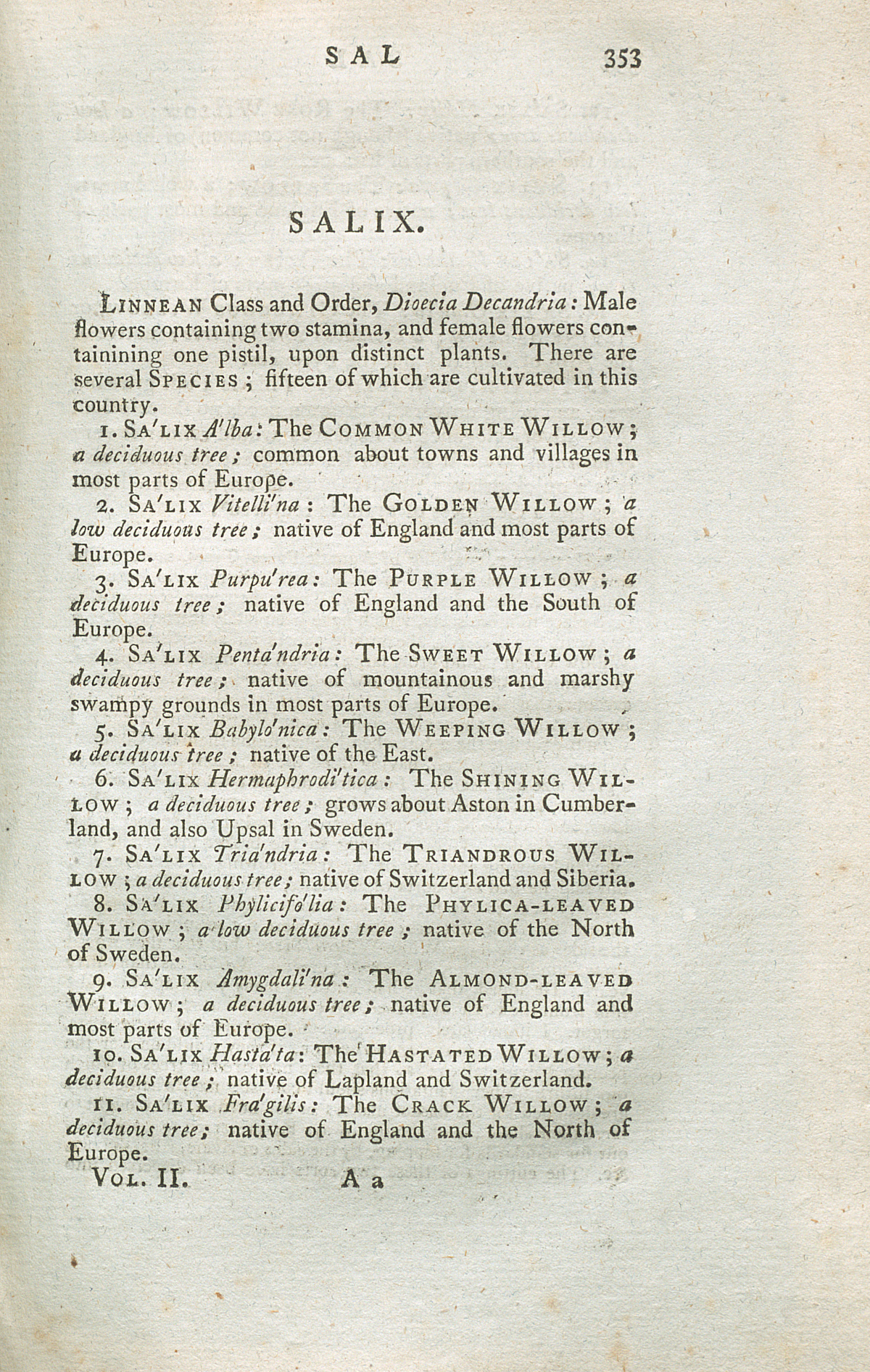 On Planting and Rural Ornament : A Practical Treatise (1803)

William Humphrey Marshall (1745–1818) was an English farmer, estate agent and agriculture writer. He was a strong proponent of the establishment of a state-sponsored body to promote improved farming standards and proposed the establishment of an agricultural college in his native county of Yorkshire. His two volume On planting and rural ornament : a practical treatise (1796) was first published in 1785 under the title Planting and ornamental gardening; a practical treatise. The work is a practical guide on how to manage timber plantations on large estates, and covers issues of planting, the choice of trees, and the maintenance of hedgerows and ornamental buildings. It is one of the earliest manuals on the subject. The second volume, on display here, contains an "Alphabet of Plants; or, a Dictionary of Trees and Shrubs enured to the open Air of this Island; with a Botanic Description, and the Mode of Propagating each Species."

The Weeping Willow is described as "a deciduous tree; native of the East." The Willow has a long history of use in medicine. Salicin, an active ingredient derived from the bark, has been used as a pain reliever for thousands of years. A specimen can be spotted on the bank of the River Lee near the Western Road entrance gate on the main UCC Campus. 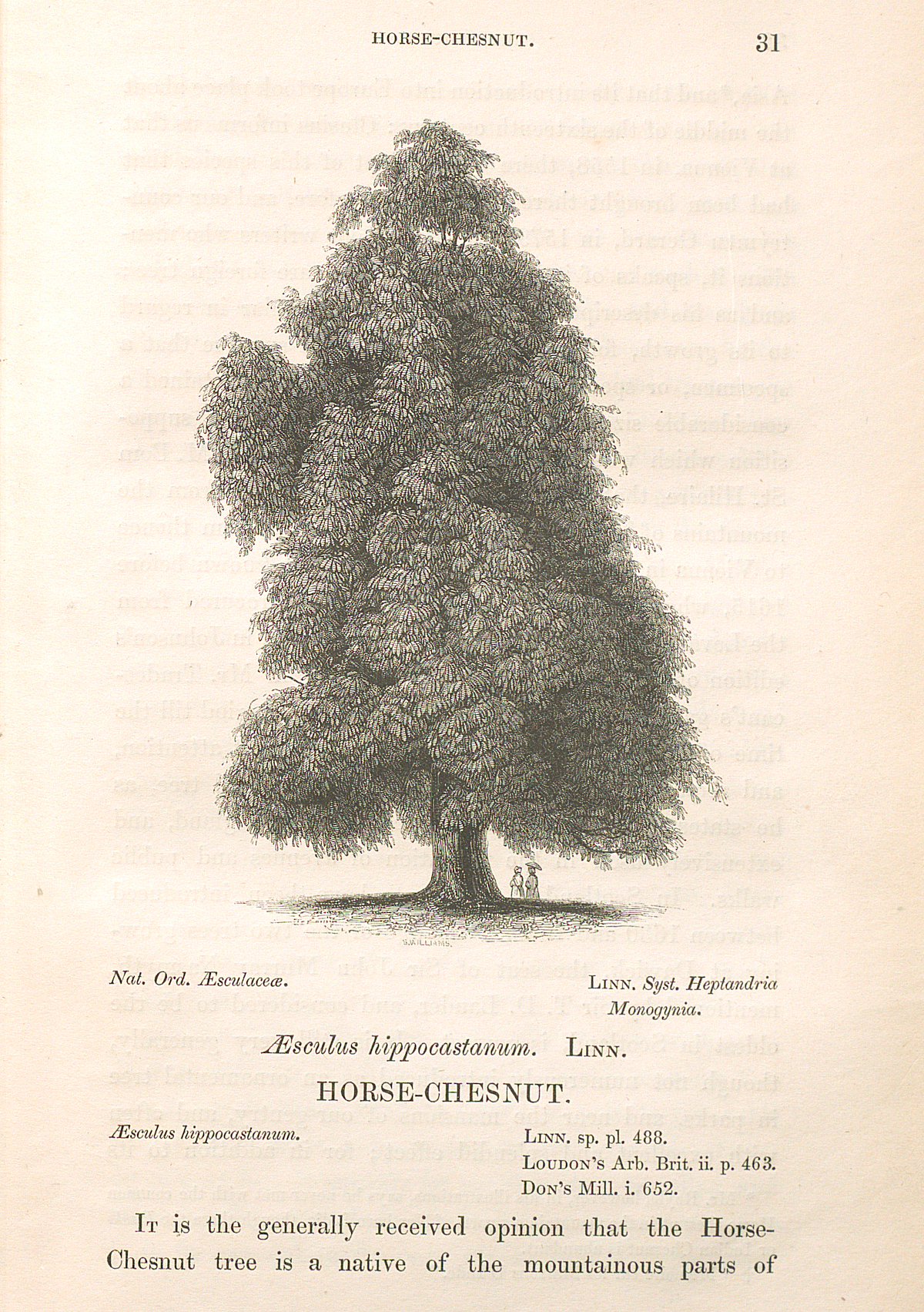 A History of British Forest-trees : Indigenous and Introduced (1842)

Prideaux John Selby (1788–1867) was an English naturalist and artist. He is best known for his pioneering work Illustrations of British Ornithology (1821–1834) containing life-sized colour illustrations of British birds. In addition to his interest in ornithology, he had extensive knowledge of botany and particularly of arboriculture. His A History of British Forest-trees (1842) provides an account of the various forest trees cultivated in Britain, many recently imported, and draws on his experience planting at Twizell House, near Belford, Northumberland. The work is intended both for general interest and as a manual to the planter and those engaged in arboriculture. It is illustrated with nearly 200 woodcut engravings.

The Horse Chestnut is a native to the Balkan Peninsula. A large deciduous tree, it was first introduced to Ireland in the late 16th century. A specimen can be found on the avenue of the main UCC Campus opposite The Lewis Glucksman Gallery.