George Boole, first professor of Mathematics at Queens College Cork (later UCC) was born on the 2 Nov 1815 in Lincoln, England the eldest son of  John Boole and his wife MaryAnn Joyce. He had 3 siblings Maryann (1818 –1887), Charles (1819 –1888) and William (1821 –1902).In 1855 he married Mary Ann Everest and they had 5 children, Mary Ellen (b.1856), Margaret (b.1858), Alice (b.1860, Lucy (b.1862) and Ethel (b.1864). In 1849 he was appointed to UCC, then known as Queen's College Cork, as the first Professor of Mathematics. In 1854 he published his most important work An Investigation of the Laws of Thought. The Laws of Thought followed The Mathematical Analysis of Logic, being an Essay towards a Calculus of Deductive Reasoning (1847) and is the founding work for algebraic logic as a discipline. The Laws of Thought engages with logic and probability. When it was published Boole was Professor of Maths in Queen’s College Cork.  In 1864 Boole died prematurely after he caught a severe chill from walking in the rain, which later turned into a lung infection. He died at his home in Ballintemple, Co. Cork aged 49.

The Papers of George Boole, (IE BP/1) were collected by Boole’s sister Maryann after his death, to provide the sourcework for a proposed biography by her. They were subsequently purchased at auction by UCC.

The collection consists mainly of personal letters to and from Boole, the original order having been lost an artificial order was imposed by the Archivist during processing. Very few of Boole’s academic works are preserved here, however drafts of unpublished lectures dealing with such topics as astronomy, ancient mythology, education and one entitled "Are the Planets Inhabited?" are extant.

The George Boole Papers Digitisation Project was co-ordinated by Special Collections, Archives and Repository Services, UCC Library with the support of Library IT and the former partner, the Digital Humanities Observatory.

The George Boole Examination Scrapbook (IE BL/SC/GB) contains mathematical examination papers set by George Boole during his time as the first Professor of Mathematics, Queen's College Cork (later University College Cork). Some papers are glued onto the pages, others are written directly onto the page of the notebook. A number of papers have handwritten notes in the hand of Boole. Some of these mathematical notations are possibly solutions to the questions set for the examination. Subjects being examined include simple equations, decimal fractions, differential calculus, spherical trigonometry, arithmetic, algebra and geometry, maxima and minima, Third Year’s Science Scholarships, etc.

A turning the pages edition of The George Boole Examination Scrapbook is available here. This was created during George Boole 200*.

An Investigation of the Laws of Thought

George Boole’s personal copy of his own work An Investigation of the Laws of Thought: On Which Are Founded the Mathematical Theories of Logic and Probabilities more commonly known as The Laws of Thought is signed on the title page in Boole’s hand “G. Boole Queen's Coll (sic) Cork.”  The work is dedicated to John Ryall who was a friend of Boole’s and Vice-President and Professor of Greek at Queen’s College Cork. There are a number of pages tipped in to the volume. Between pages 46 and 47 there is a handwritten page by Boole. In addition following page 417 are two unpaginated pages by Boole. Pages 423 to the end of the volume are handwritten by Boole.

A turning the pages edition of An Investigation of the Laws of Thought: On Which Are Founded the Mathematical Theories of Logic and Probabilities is available here. This was created during George Boole 200*. 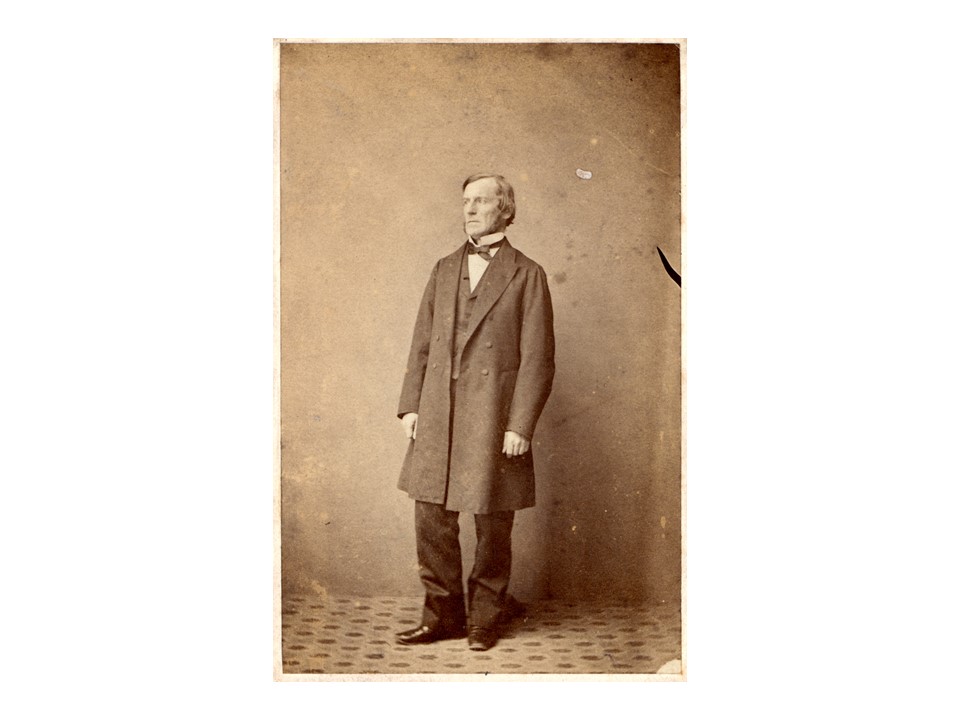 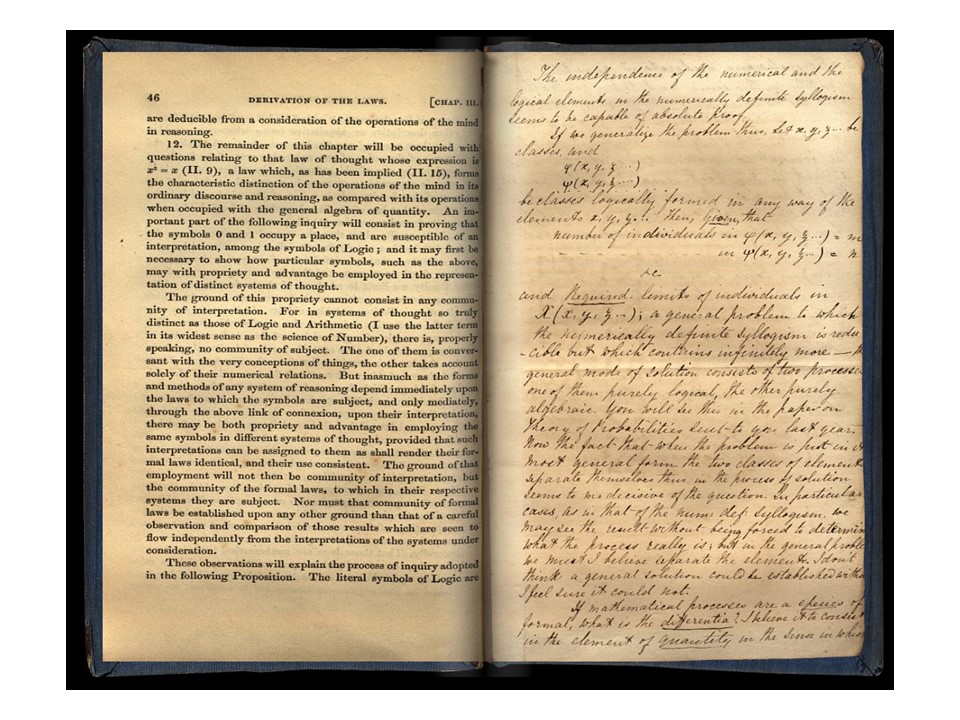 Annotated Page in An Investigation of The Laws of Thought

Tipped in page between pages 46 and 47 in Boole’s own hand. There is text on both sides of this tipped in page which discusses classes logically framed and classes of elements. The opening line is “The independence of the numerical and the logical elements in the numerically definite syllogism seems to be capable of absolute proof.”

Boole, George. An Investigation of the Laws of Thought: On Which Are Founded the Mathematical Theories of Logic and Probabilities. London: Walton and Maberly, 1854. 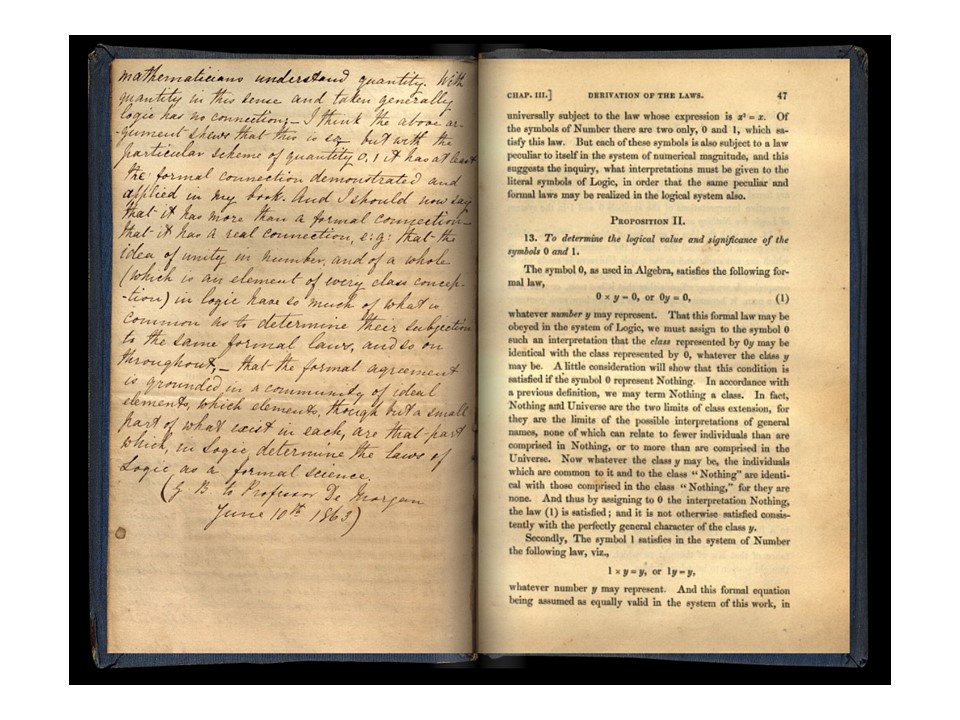 Annotated Page in An Investigation of The Laws of Thought

Tipped in page between pages 46 and 47 in Boole’s own hand. The page is signed by Boole “G.B. to Professor De Morgan, June 10th 1863. Augustus De Morgan (1806–71) provided Boole with a testimonial in support of Boole’s application for the post of Professor of Mathematics at Queen’s College Cork in 1846. Boole had been in correspondence with De Morgan since 1842.

Boole, George. An Investigation of the Laws of Thought: On Which Are Founded the Mathematical Theories of Logic and Probabilities. London: Walton and Maberly, 1854. 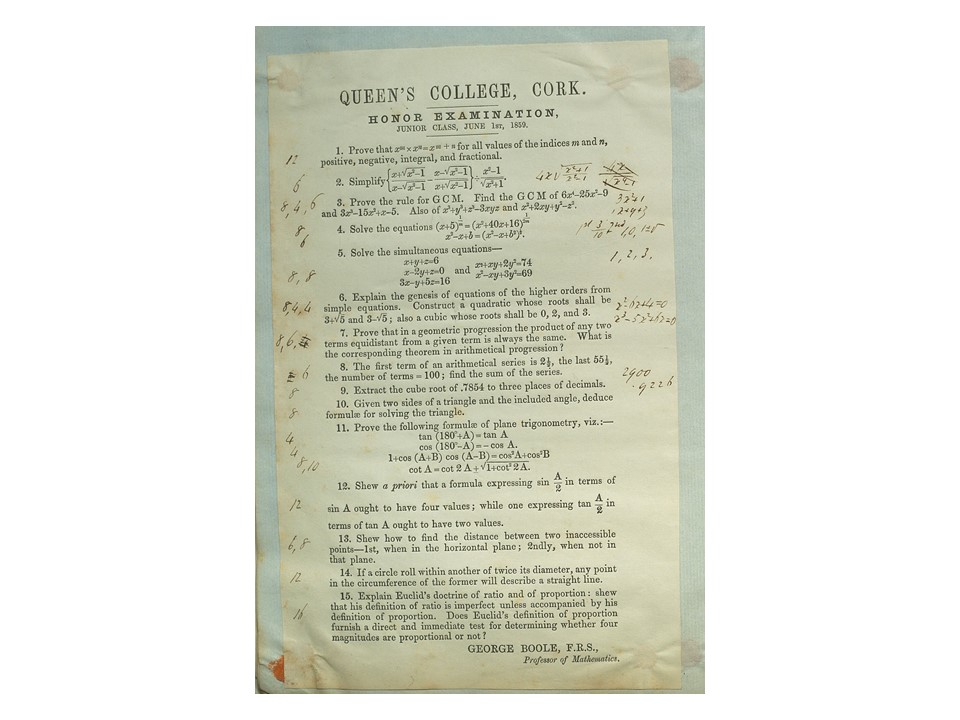 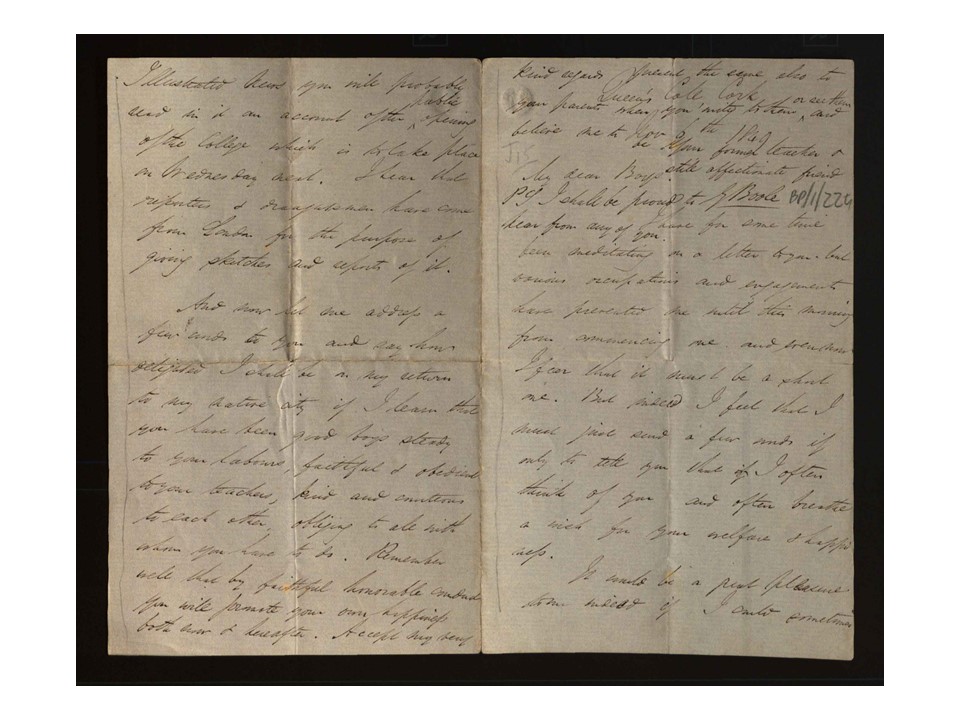 6 Nov 1849: From Boole in Cork to his old pupils telling them about his new situation. He mentions he often thinks of them and their welfare and happiness. He describes the countryside around Cork and the college, he mentions the steady rainfall and that he has heard Cork referred to as the rain basin of Ireland. He refers to a report on the opening of the college which is to be featured in the next edition of the Illustrated London News. He adds he would be delighted to find on his return that they all had been good boys 'steady to your labours faithful and obedient to your teachers, kind and courteous to each other, obliging to all with whom you have to do', and states he would be proud to hear from any of them.

Over 2014/2015 UCC celebrated both the bicentenary of George Boole's death and the 200th anniversary of  his birth. An exhibition "The Life and Legacy of George Boole" was held in UCC Library to mark George Boole 200* as well as a Google hosting a George Boole Google Doodle. 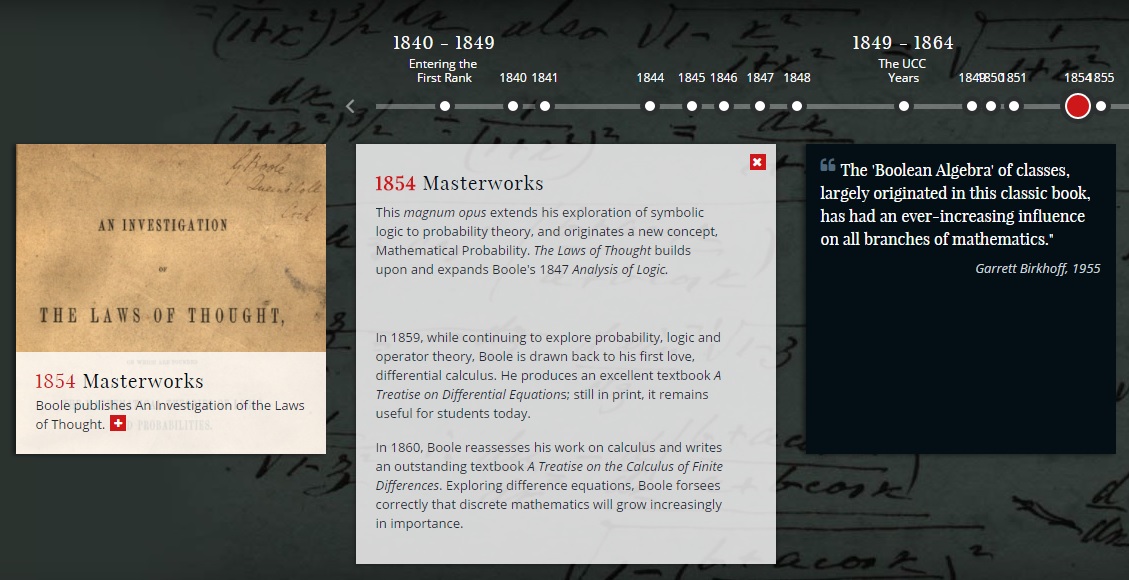 During the George Boole 200* celebrations a series of blog posts describing Boole's life in Cork was published on The River-side. The blog posts describe food and weather in Cork, the university in the 1840s, his relationship with his family and various festivals celebrated in Cork. All letters included in the series of posts are part of the Papers of George Boole (IE BP/1).