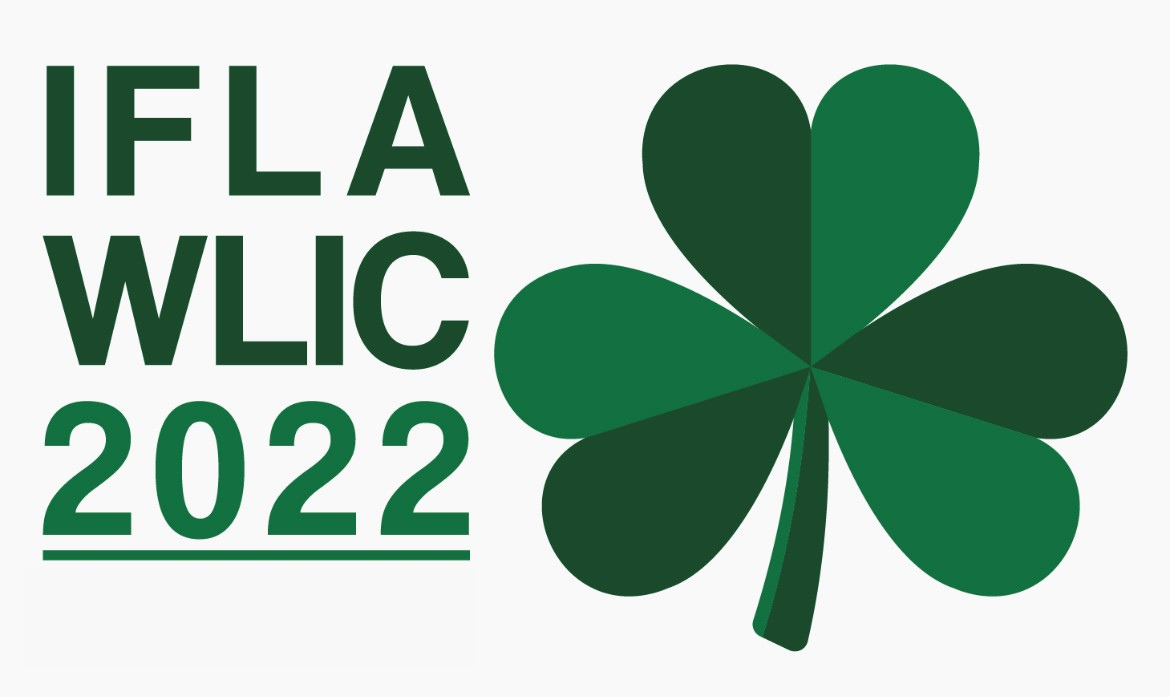 The River-side's promotional pull-up banner, focusing on Special Collections, Archives and Collaborative Projects, was originally created for Library Boulevard, part of the 87th IFLA World Library & Information Congress held in Dublin in July 2022. Library Boulevard displayed a large number of pull-up banners to showcase what libraries and library staff do in Ireland. 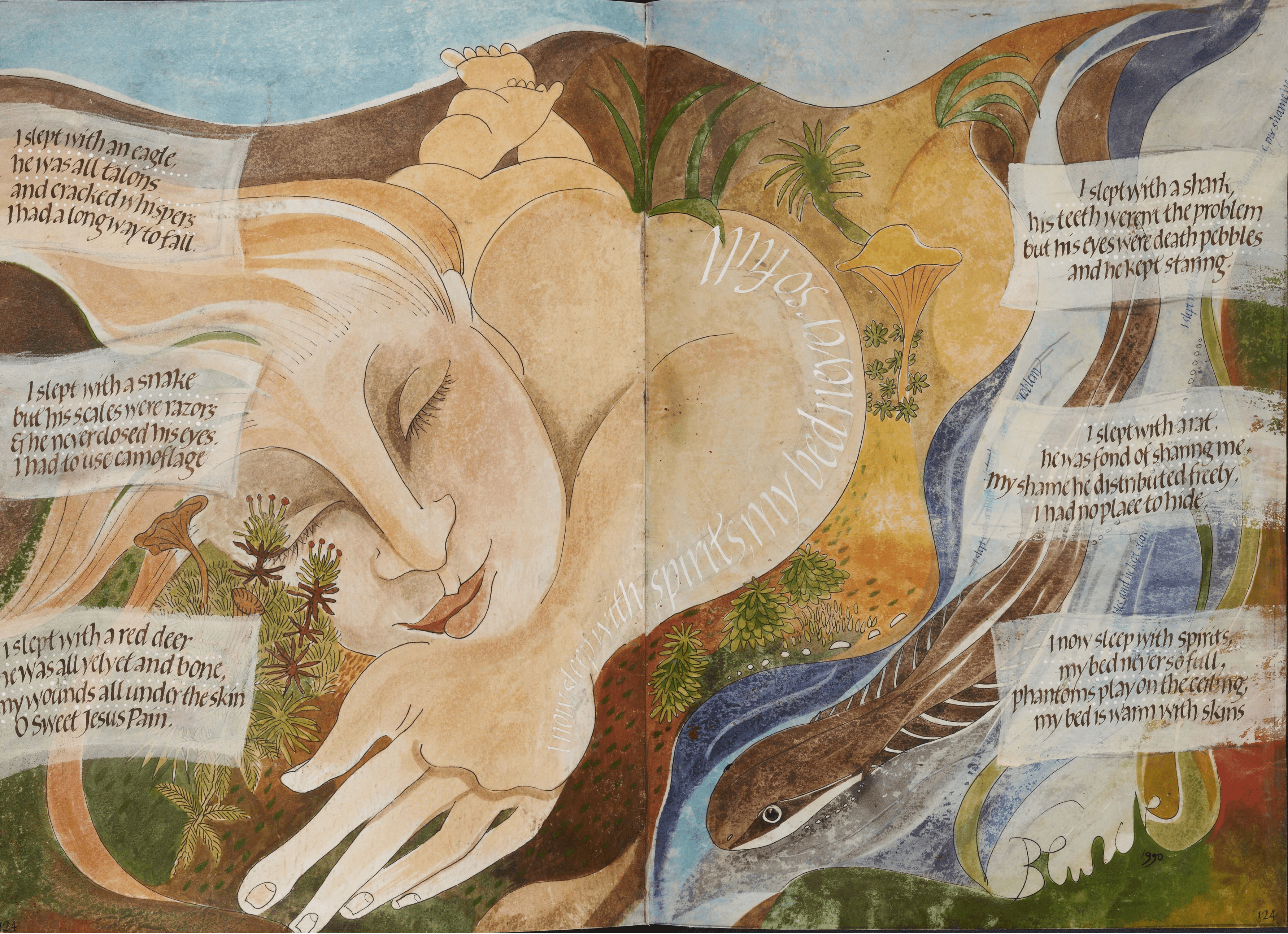 The Great Book of Ireland, Leabhar Mór na hÉireann, is an extraordinary single vellum manuscript comprising the original work of 121 artists, 143 poets and nine composers. Produced in Dublin between 1989 and 1991, it was acquired by University College Cork.

Conceived originally as a venture to create a saleable artefact which would help to fund the development plans of two arts organizations in Ireland, the original architects of the idea and editors of the end product were Theo Dorgan of Poetry Ireland and Gene Lambert of Clashganna Mills Trust. Out of their initial meeting in March 1989 came the first tentative idea of producing an original artefact that would raise substantial funds for their charitable-status arts organizations, while at the same time being a venture worthwhile in itself. What was to emerge was a project of breathtaking ambition and scale – to produce The Great Book of Ireland, Leabhar Mór na hÉireann.The artists, poets, and composers were asked to contribute in their own medium what they believed represented their hopes, fears, dreams, or imaginings in the Ireland of that particular time, and which would have resonance in a thousand years time - as the longevity of vellum allows. 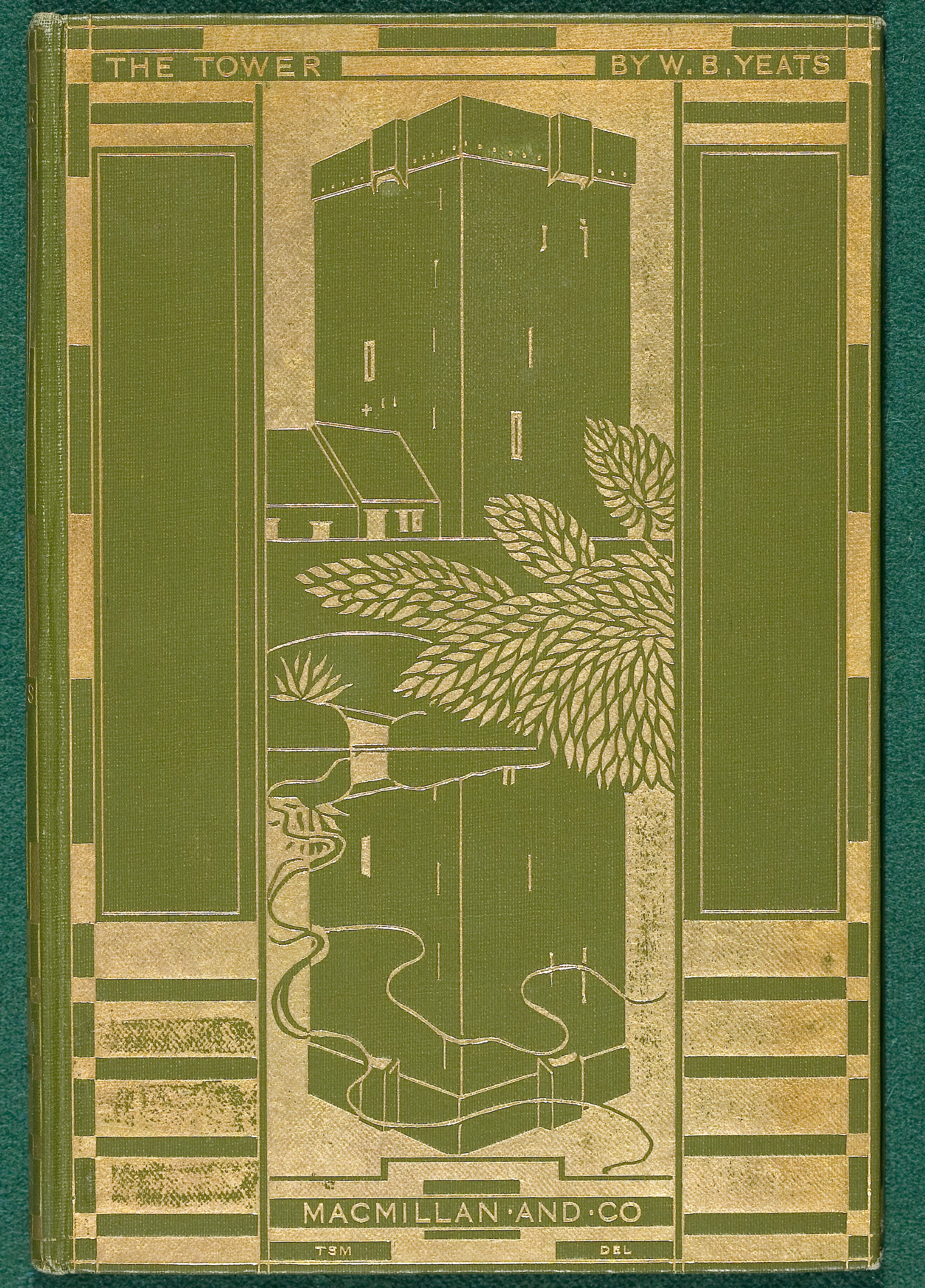 The Tower by W.B. Yeats contains  "Sailing to Byzantium," "The Tower," and "Leda and the Swan." The book has a design by Thomas Sturge Moore on the bookbinding. Blocked in gilt is Yeats's Ballylee Castle, reflected in a pool of water. The same design is also produced in the original pictorial dustwrapper. In Allan Wade's bibliography this item is 158. 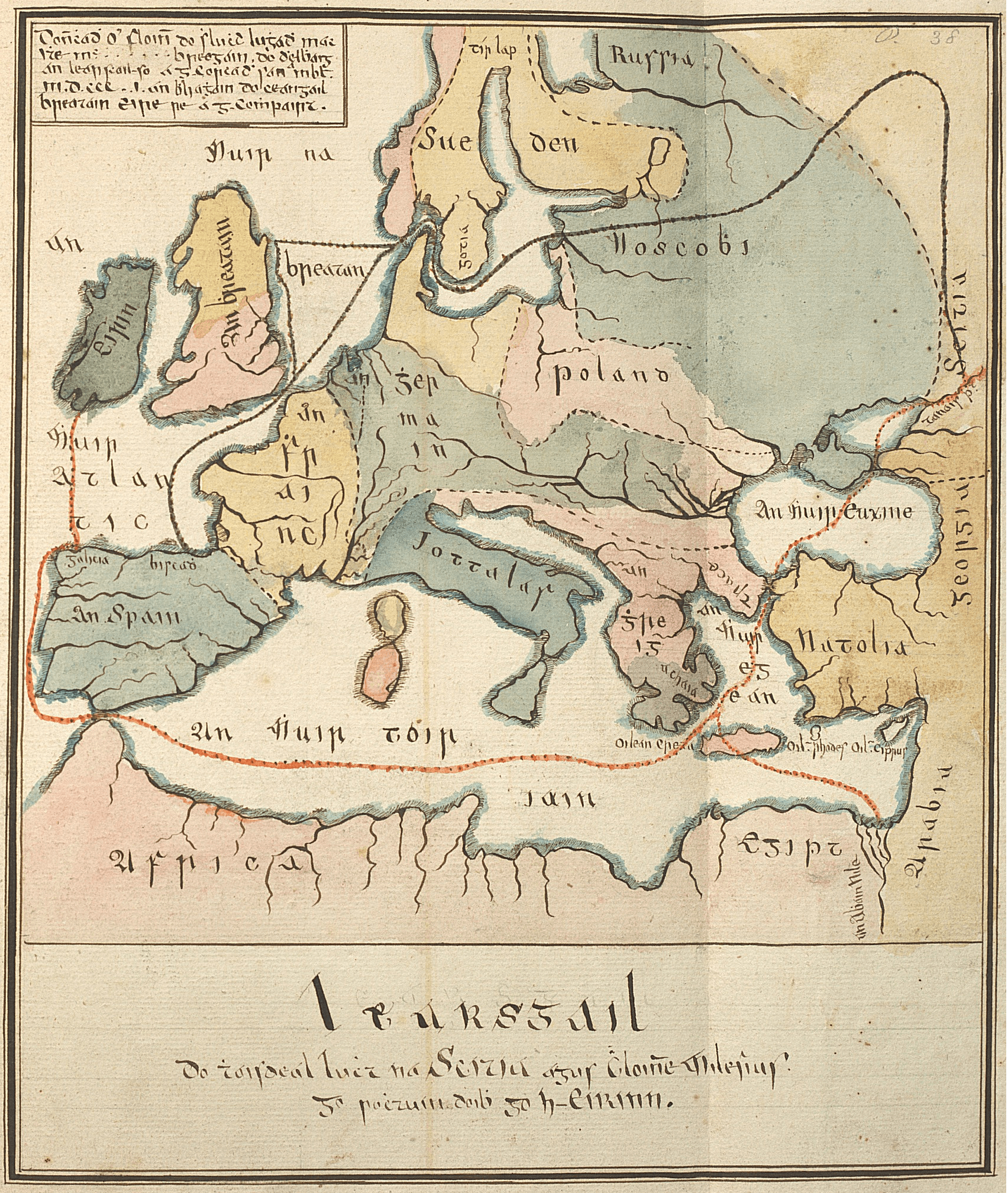 Ms 61, Murphy Collection. Ms 61 is an 18th century paper manuscript, [xxvi] + 308 pages and the scribe is Seághan na Ráithíneach Ó Murchadha. In 1800 in Cork Donnchadh O'Floinn drew the coloured map which is tipped in between pages 38 and 39.

The Murphy Collection comprises 77 manuscripts (Mss 1-77) and was the first Irish language manuscript collection acquired by UCC (1926). The collection was that of Professor James E. H. Murphy Professor of Irish at Trinity College Dublin (1896-1919). Professor Breandán Ó Conchúir produced a printed catalogue of the collection in 1991. Printed catalogues give descriptions of the creation and content of each manuscript. 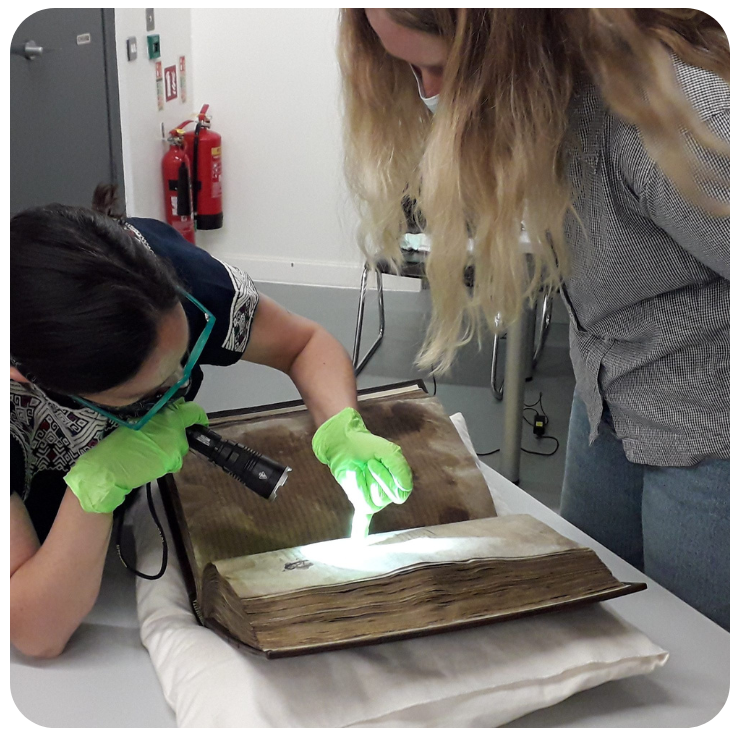 Prof. Pádraig Ó Macháin of the Dept. of Modern Irish in UCC is undertaking analysis of The Book of Lismore with XRF analysis. This is part of the Inks and Skins project funded by the Irish Research Council Advanced Laureate Award. Anna Hoffmann (Dept. of Modern Irish) and Veronica Biolcati (Tyndall Institute) are two PhD students working on the project. 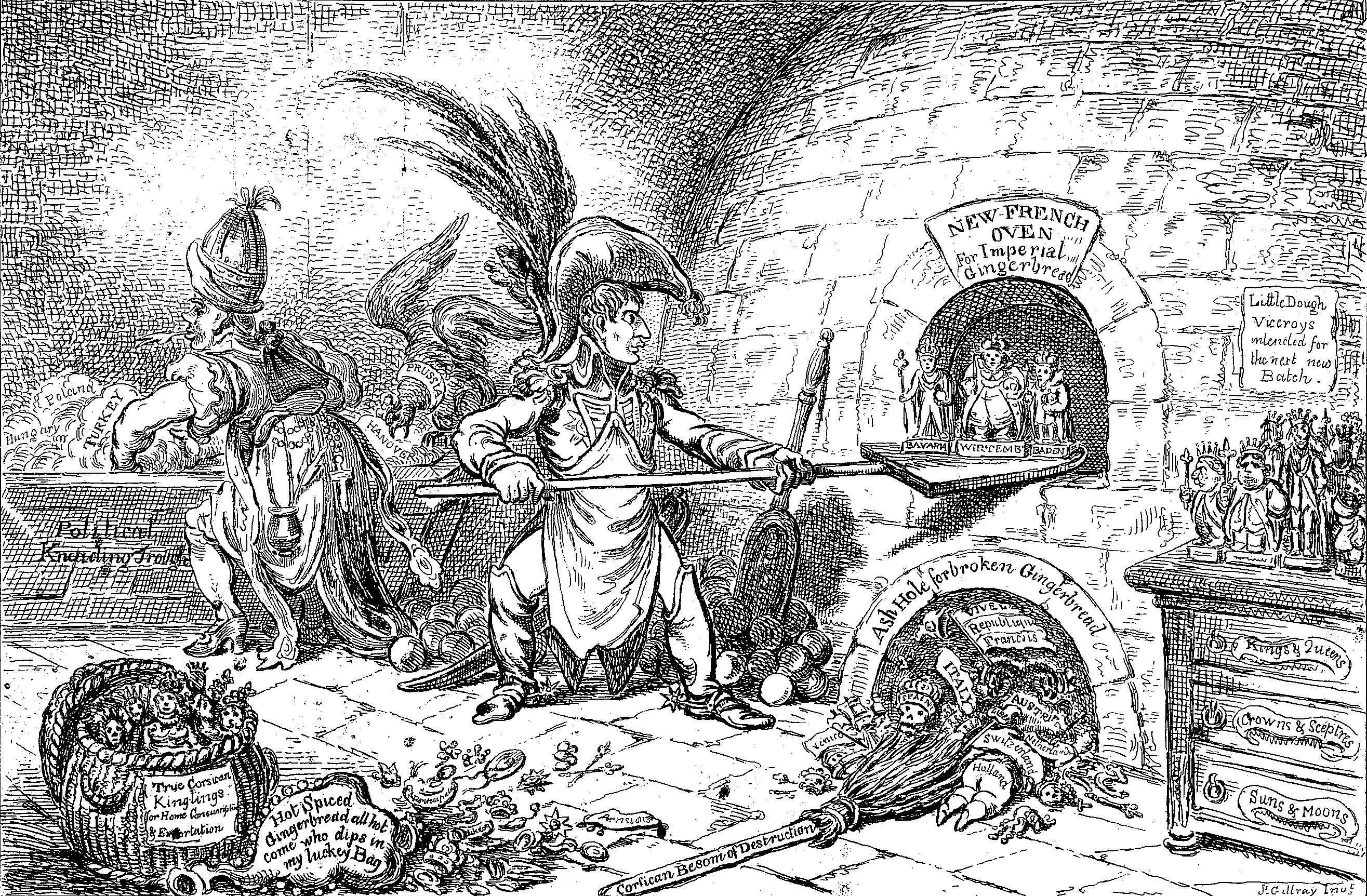 Tiddy-Doll, the great French-Gingerbread-Baker, drawing out a new Batch of Kings – his Man, Hopping Talley, mixing up the Dough, BL/CV/PolP/N/10

Colour Our Collections is an annual international colouring festival on social media where libraries, museums, archives and other cultural institutions share free colouring content featuring images from their collections. It was launched by The New York Academy of Medicine Library in 2016. In February 2022 UCC Library participated for the first time sharing images from Special Collections & Archives to spread awareness and better engagement with our collections by inspiring creativity and sparking curiosity.

This image is from a collection of Napoleonic Prints and is based on an engraving of Napoleon Bonaparte by James Gillray (“the father of the political cartoon”) from 1806. The satirical print depicts Napoleon as a gingerbread baker, drawing the baked figures of three kings out of a stone baking oven with a large wooden peel. In the background Talleyrand can be seen mixing dough in a vat titled ‘Political Kneading Trough’ while a wicker basket in the foreground contains freshly baked figures (Napoleon’s relatives and allies) ready for delivery. The image is packed with satirical allusion and fun details, making it a prime candidate for the colouring book. Special Collections holds two versions of the print, one in colour and the other in black & white and we chose the black & white version for inclusion in the Colouring Book. 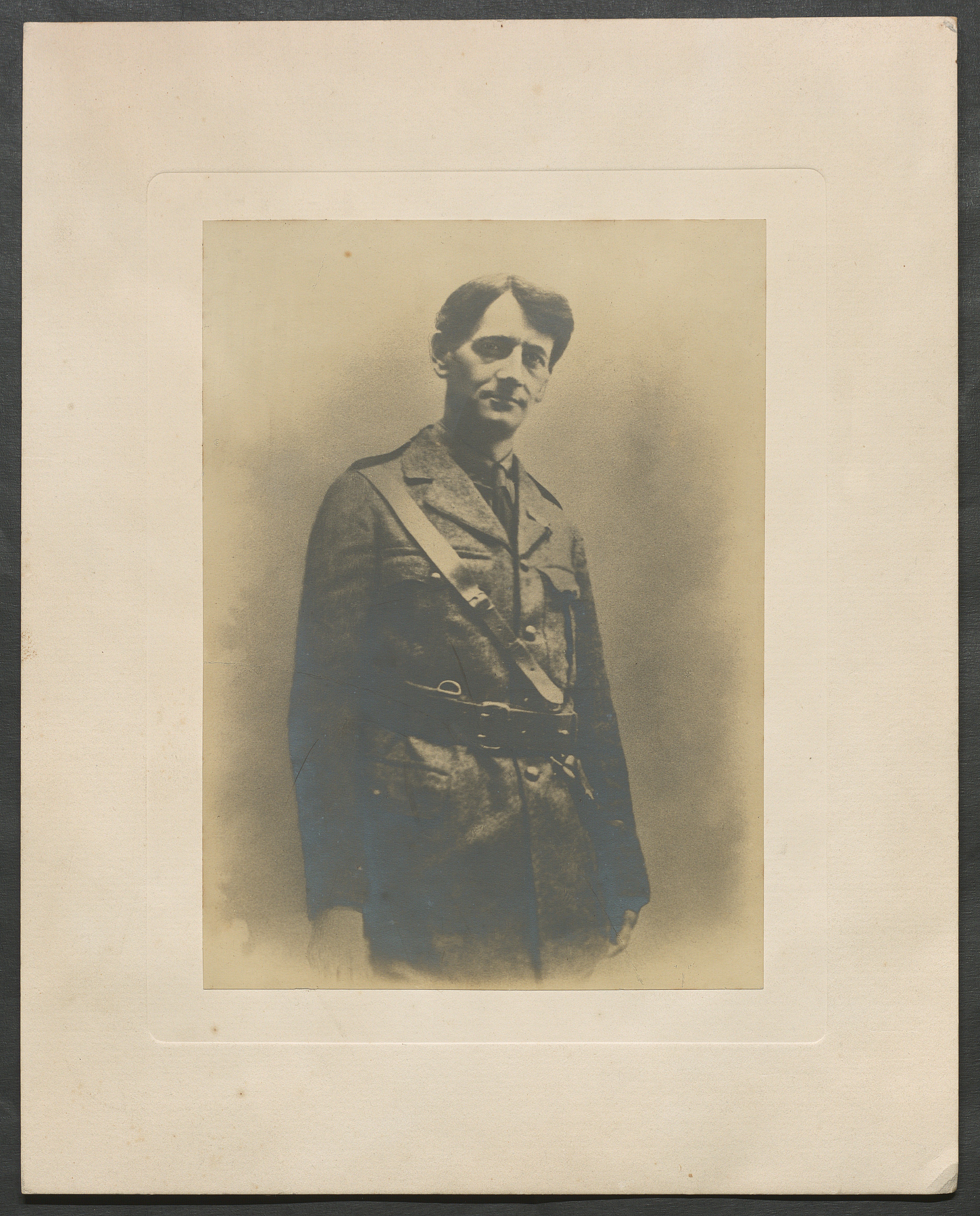 The Pauline Henley Archival Collection is primarily the correspondence of Pauline Henley, including six letters from Terence MacSwiney. The earliest item is a letter from the British Home Office to Pauline regarding her request for permission to visit MacSwiney. This is followed by MacSwiney's letters, from October 1916 to July 1918, most of which are from prison or internment, and are mainly personal and descriptive, rather than strongly political. Three are from the period of MacSwiney's hunger strike in 1920 and includes one letter from Mary [Máire] MacSwiney, [Terence's sister]. One of the final items is a letter by MacSwiney, to 'Sean', either Sean O'Hegarty, [Cork Volunteers and Cork No 1 Brigade colleague], or Sean MacSwiney [his brother], bidding farewell from 'your old comrade'. The earlier letters illustrate MacSwiney's personality and friendship with Henley and provide interesting information on his time in prison and internment. The later letters shed light on his final days on hunger strike, and the activities and feelings of family and friends. It is noteworthy that Henley continued to correspond with Mary [Máire] MacSwiney whilst the latter was incarcerated in Mountjoy in the years following Terence MacSwiney’s death. Also included in the collection is a series of newspapers from the 20th century commemorating Michael Collins, Terence MacSwiney, and the 1916 Rising. This is a small, but invaluable, collection for those interested in the study of early 20th century Irish Politics generally. And more specifically, an insight into the life of one of the key players in the Irish War of Independence. 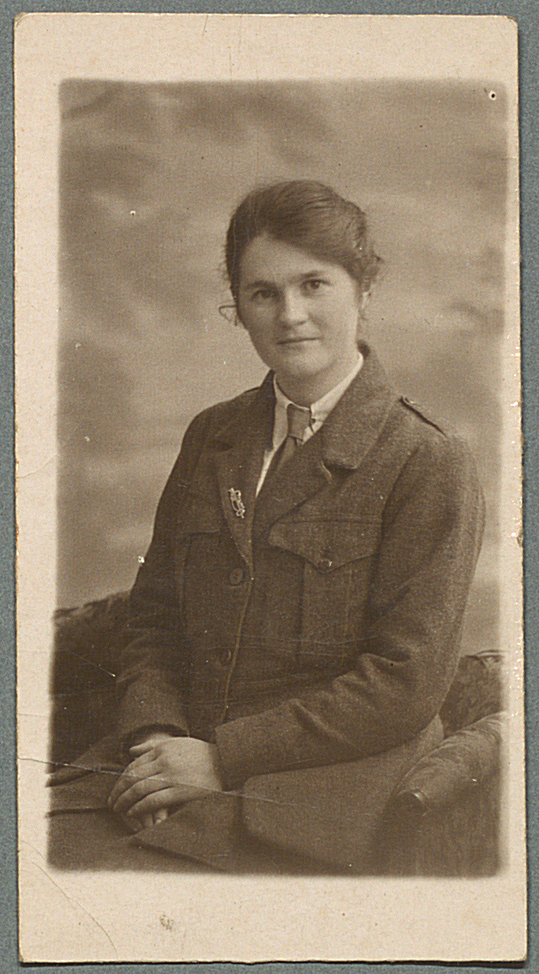 The Kathleen Boland Collection is a collection of letters and photographs and memorabilia, spanning 100 years from the late nineteenth century to the 1970’s giving a unique insight into a family connected in many ways with the foundation of the State. Kathleen, Harry, Gerald and Edmund Boland were active participants in the struggle for Irish independence. Some of the early documents paint a picture of life in various British and Irish Jails and elucidate some of de Valera’s and Sinn Fein’s strategy at the time.

The Kathleen Boland Collection offers a rich assortment of cultural and political material which will greatly benefit a new generation of researchers. The collection is comprised of material collected by Kathleen Boland, including a number of items associated with her late brother, the senior republican political leader, Harry Boland. Much of the collection connects to Revolutionary Ireland, with additional material extending into the Fianna Fail world of the 1930s to the 1960s. 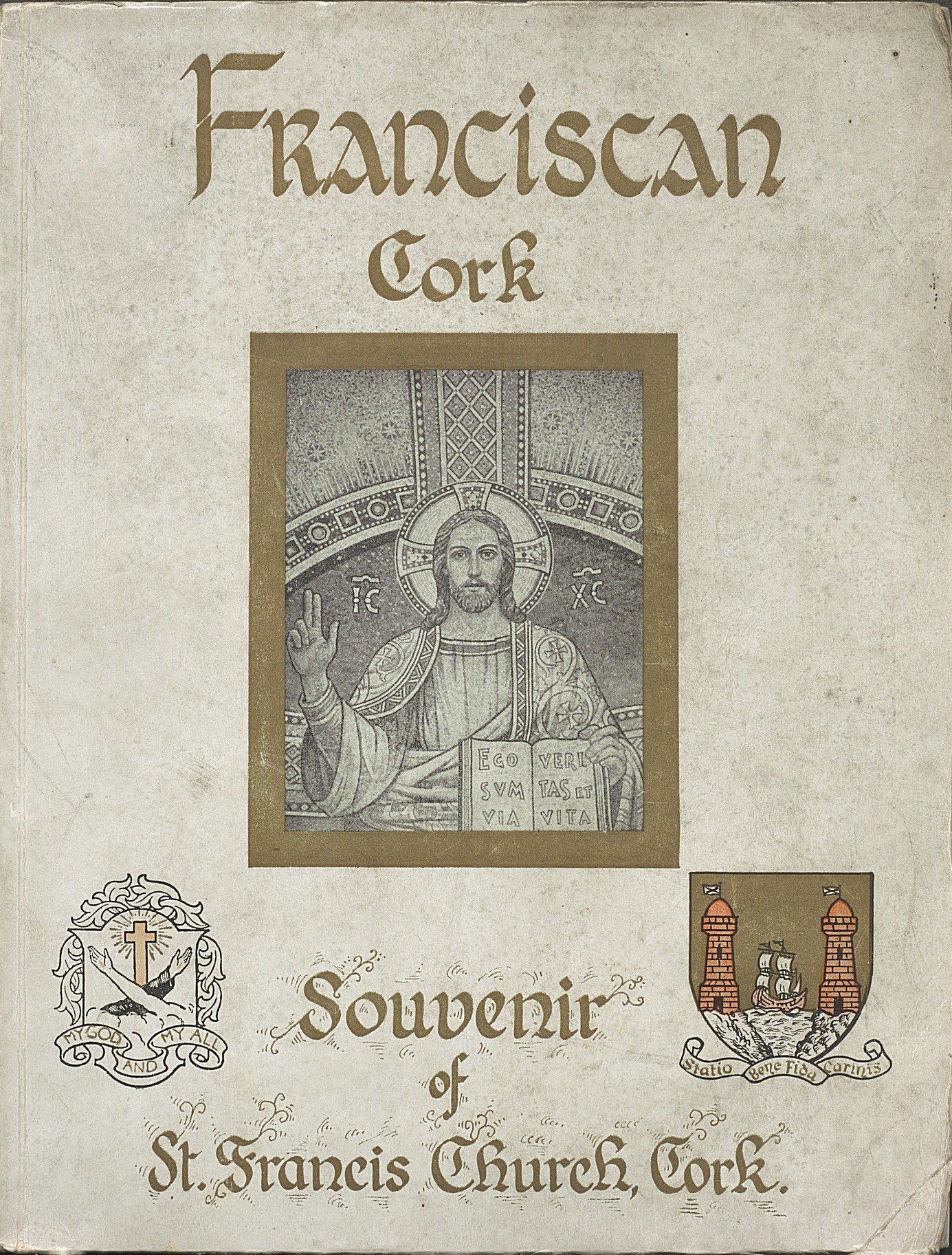 From 2017-2021 The River-side blog from Special Collections, UCC Library published a digital output created as part of the MA in Medieval History. This digital output was presented as a series of blog posts on The River-side and it emerged from a postgraduate module HI6091 co-taught by Dr Małgorzata Krasnodębska-D’Aughton and Elaine Harrington. The blog posts used various printed item from the collections. Special Collections are delighted to welcome students engaging with our collections in this manner and we consider that an online exhibition contributes to our mission of ‘connecting people with ideas.’

The students in creating an online exhibition developed a wide variety of skills including critical analysis of texts, awareness of copyright restrictions, object handling, teamwork and communication. For History students at both undergraduate and postgraduate levels, Special Collections represent research facilities that provide specialised support and access to stimulating resources. UCC Library considers the end results of an exhibit that celebrate campus scholarship to be invaluable.

The exhibition series celebrates the on-going collaboration between the School of History and UCC Library's Special Collections, building on the University’s rich tradition of medieval scholarship and through the online output reaches beyond the walls of UCC. 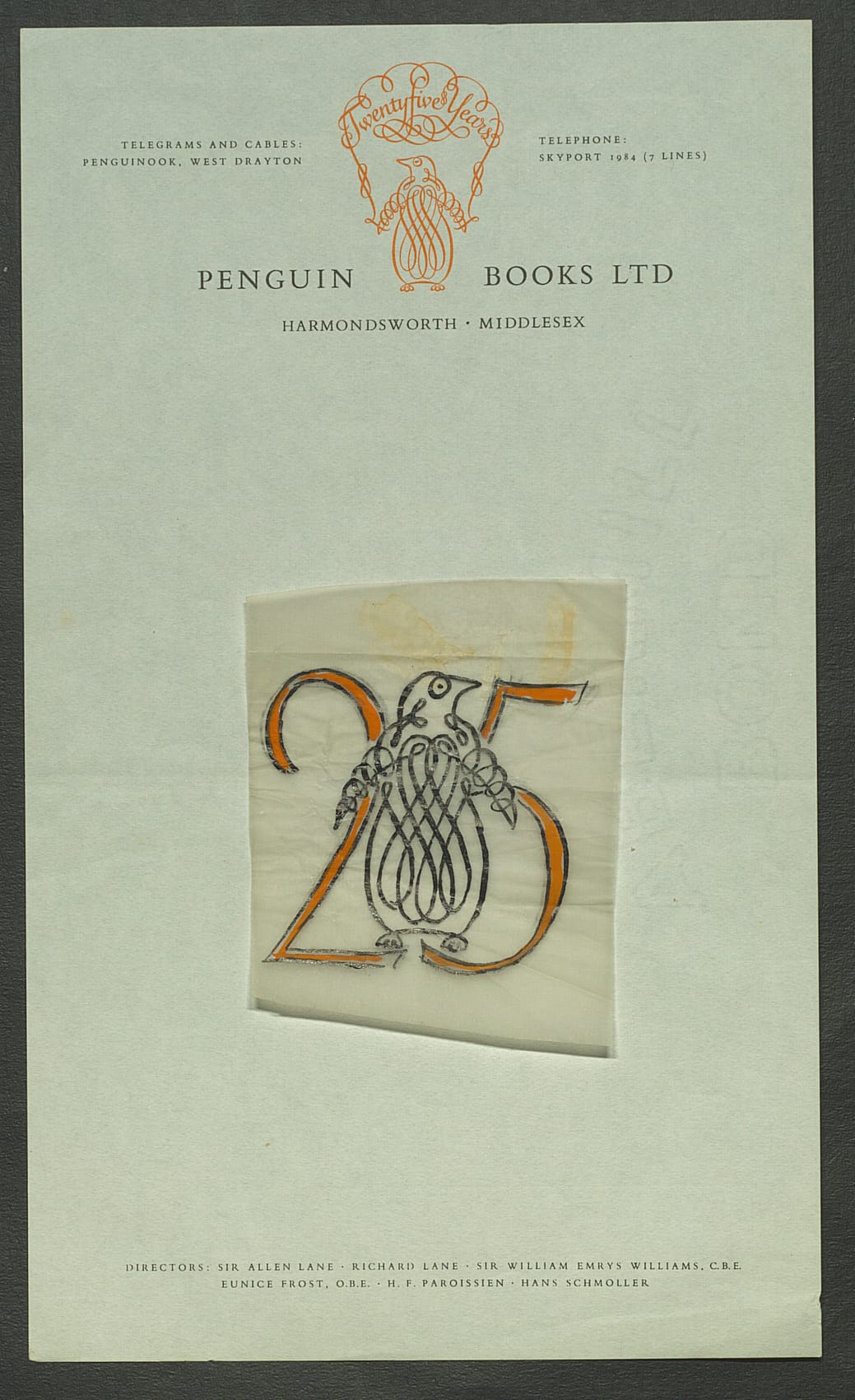 The Elizabeth Friedlander Archival Collection contains the working papers of the graphic designer Elizabeth Friedlander who is famed for her intricate boarder designs, her custom designed font 'Elizabeth', her patterned papers for the Curwen Press and patterned papers for Penguin Books . From 1951 she was the calligrapher to the Royal Military College, Sandhurst, lettering Rolls of Honor. Her ornamental borders were issued by Linotype (1952) and Monotype (‘The Friedlander borders’, 1958). 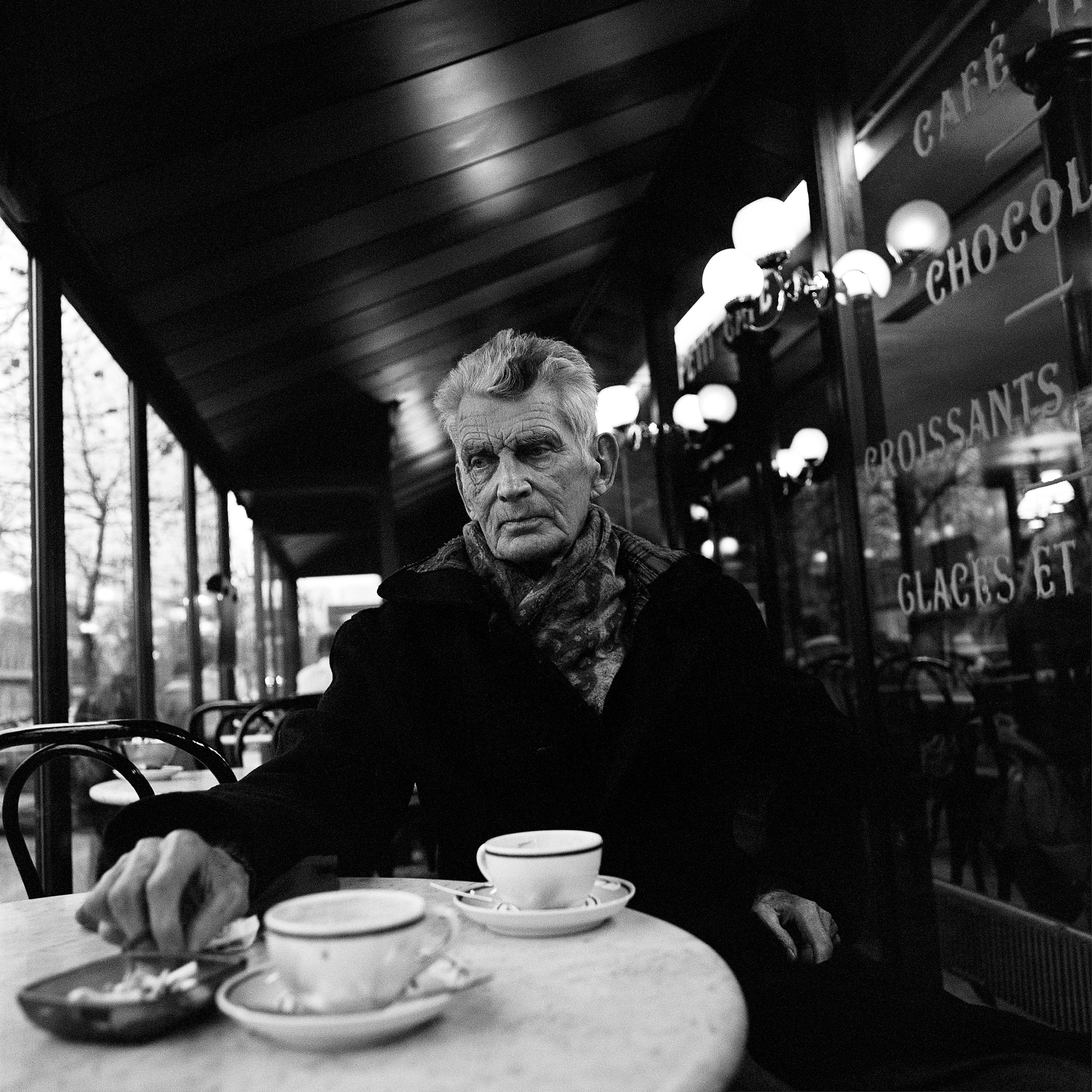 The photographic collection and archive of the photographer, John Minihan (1946-), contains some of the most memorable photographic images from the last century. The collection comprises of more than 30,000 original photographic negatives and prints, featuring iconic images of Samuel Beckett, Seamus Heaney, Francis Bacon, Edna O’Brien and many other literary and cultural figures – from Jimi Hendrix or The Who, to Lady Diana Spencer.