Garret Cahill who works in Inter-Library Loans curated this display of music in The Corke Journal.

Swiney, born Owen Sweeney, probably in Limerick about 1735, was apprenticed to Andrew Welsh, a printer and bookseller who had taken over his father’s printing business in Castle Street, Cork, but had moved to Limerick before 1739. By 1753, Swiney had set up shop in Paul Street, at the heart of the rapidly-expanding commercial centre of Cork city.

As well as the newspaper, Swiney produced numerous local imprints of theological, political and literary works - including the first provincial printing of Goldsmith’s The Vicar of Wakefield in 1766, and a Focaloir Gaodhilge-Sax-Bhearla in 1770.  He also worked as printer to Cork Corporation from 1755, though the Council book notes that on 26th May 1762, £7 17s. 11d. was to be paid “to Eugene Swiney for printing work from 1758 to 1761, and that said Swiney be no farther employed by this board.”

Swiney’s first wife died in July 1765, and the following April he married Isabella Callanan, the daughter of a local apothecary.  He himself died on 12 November 1777, with the Dublin Saunders’s News-Letter remarking that “however unsuccessful in the pursuit of fortune, he was universally allowed to possess an honest heart and most unsullied reputation both in public and private character.”

The business was carried on by his son John M. Swiney, who in 1781 published a collection of verse entitled The Juvenile Muse. Appropriately, this included “A New Poem on the Art of Printing”.  Unfortunately, the son does not appear to have inherited the father’s business abilities and no more is heard of the firm after this.

About The Corke Journal

The Corke Journal is the oldest Cork newspaper to survive in any quantity.  It was printed by Eugene Swiney, with the first issue appearing on 7 December 1753. At the Paul Street location and later at premises near the Exchange on North Main Street, Swiney published The Corke Journal for the next twenty years, with the paper generally appearing on Mondays and Thursdays.  Like most provincial newspapers in Ireland in the 18th century, the content was generally a summation of news from London and the continent, a small portion of local news, and a substantial number of advertisements - the main source of revenue.  The quality of the newspapers varied considerably, but Swiney was a notably inventive printer, often using stylish illustrations to accompany advertisements. 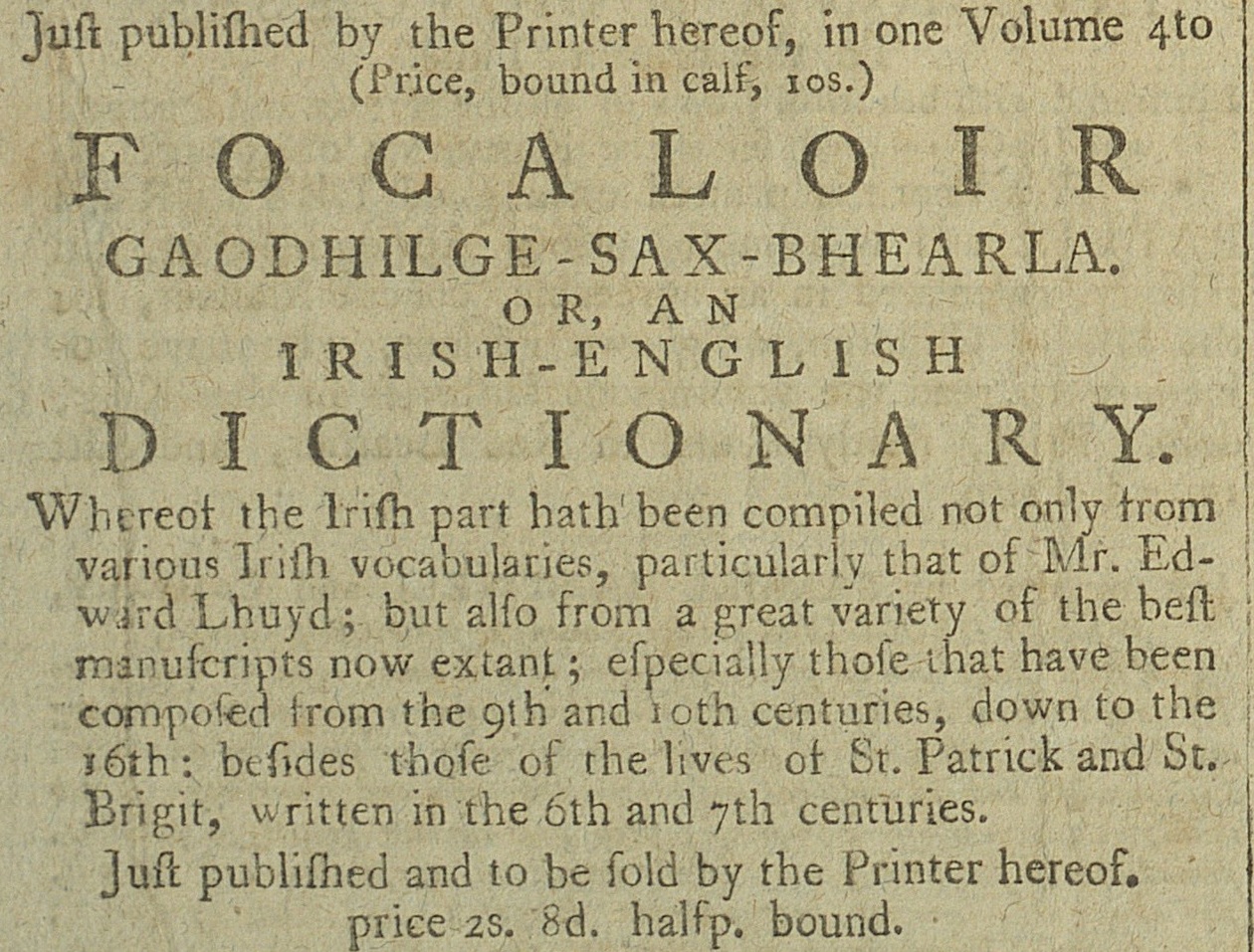 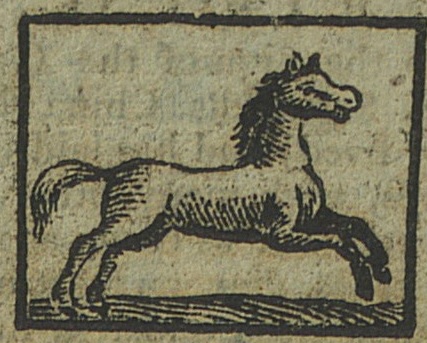 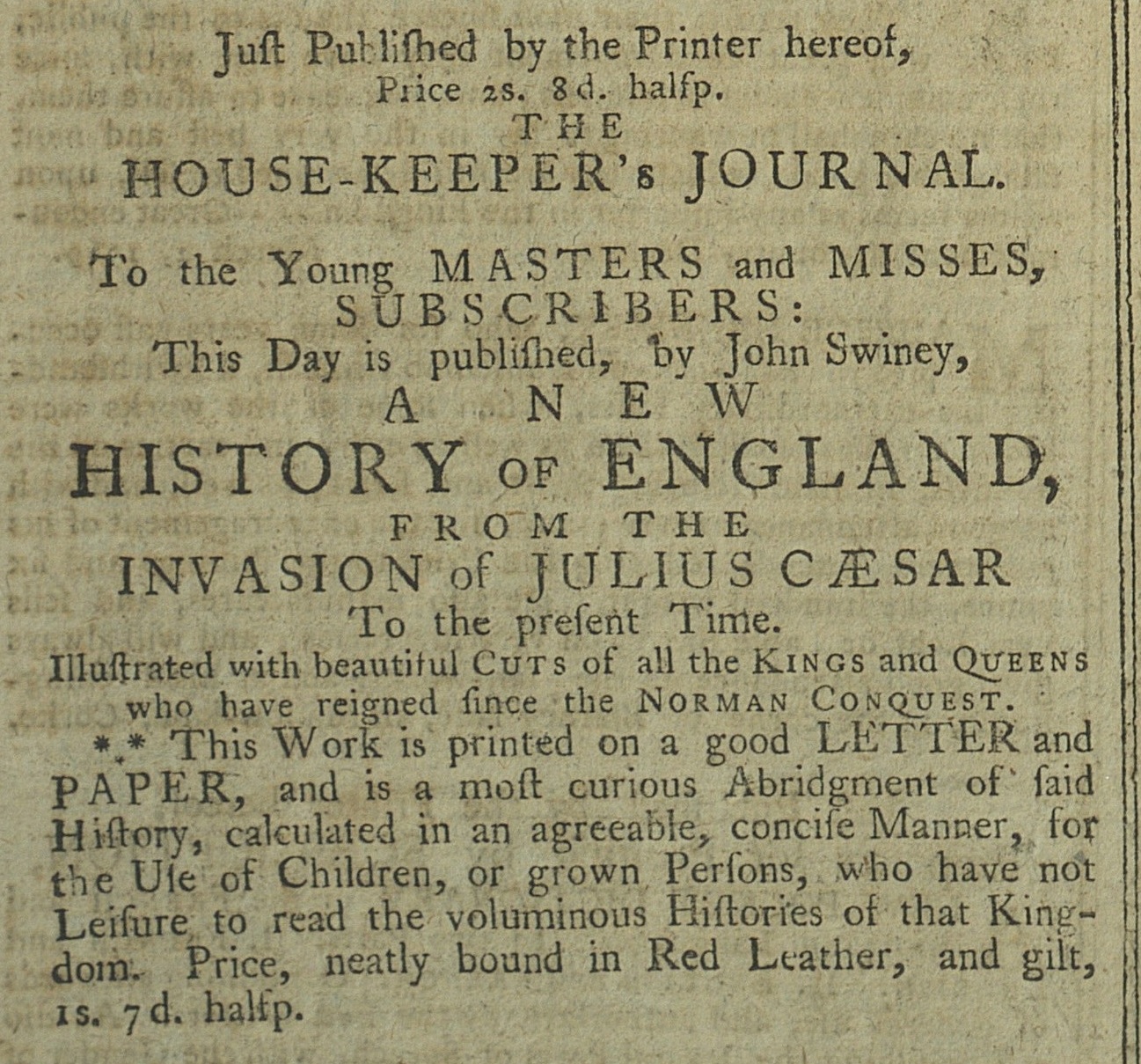 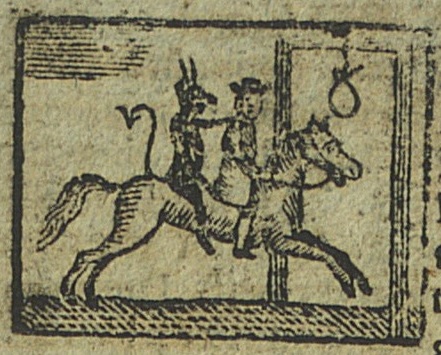 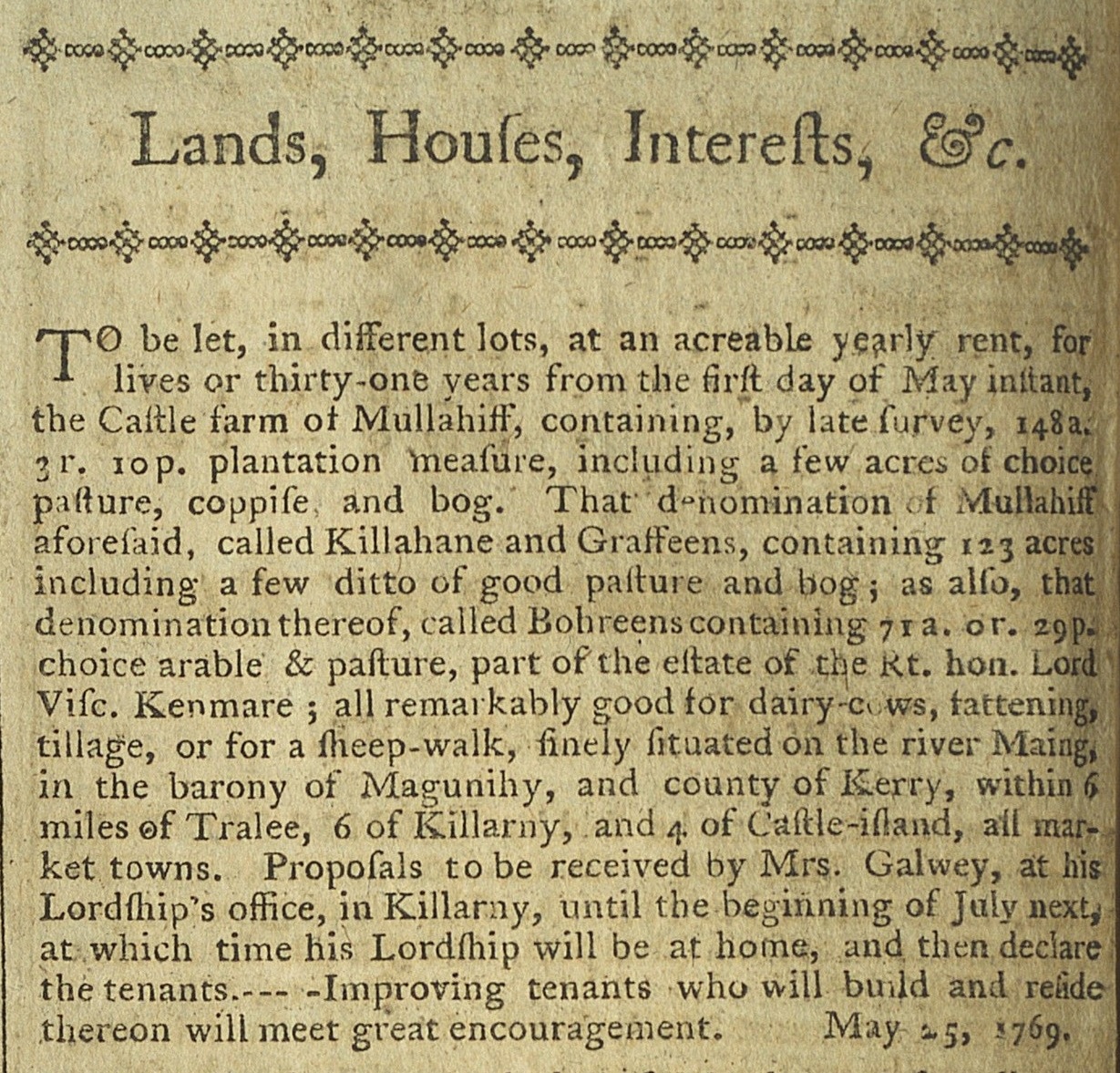 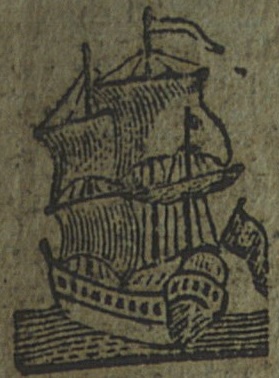 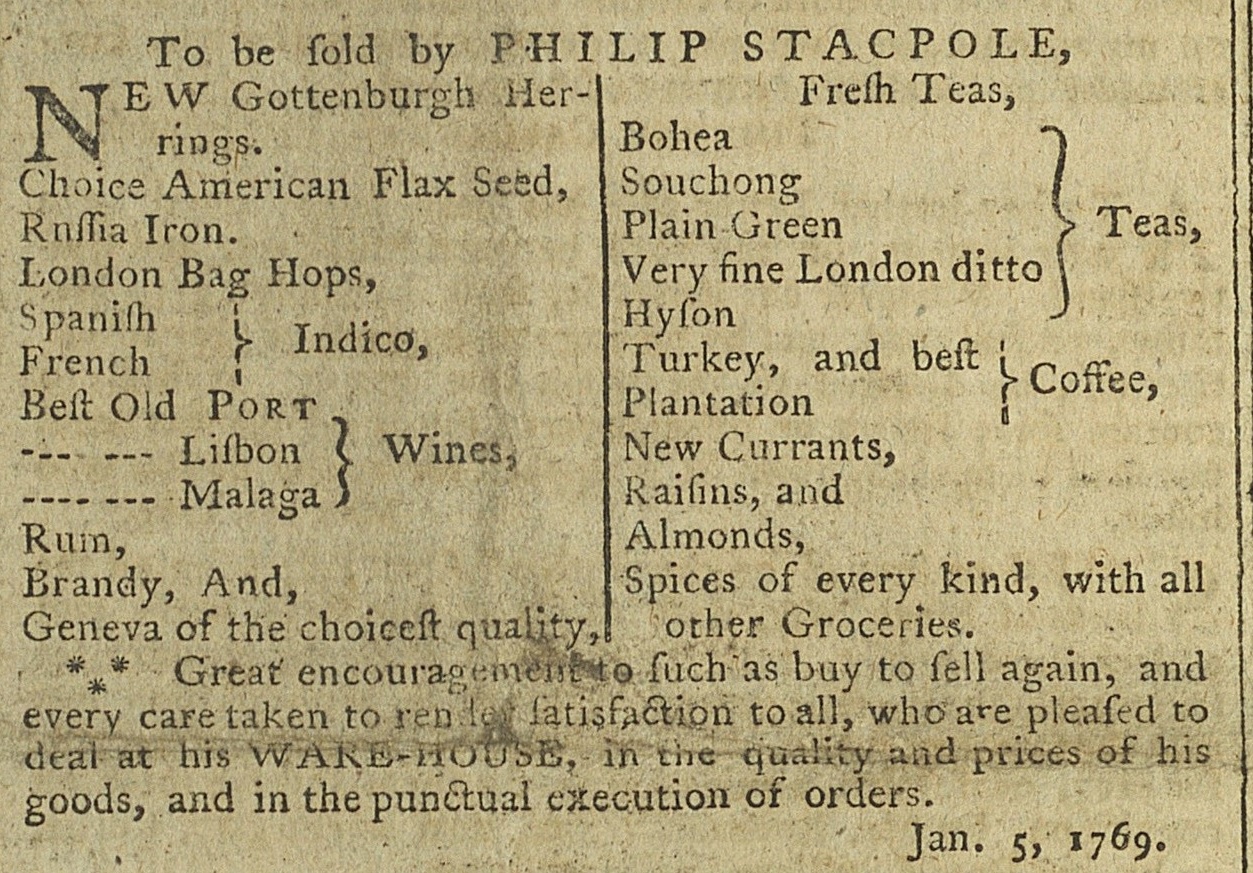 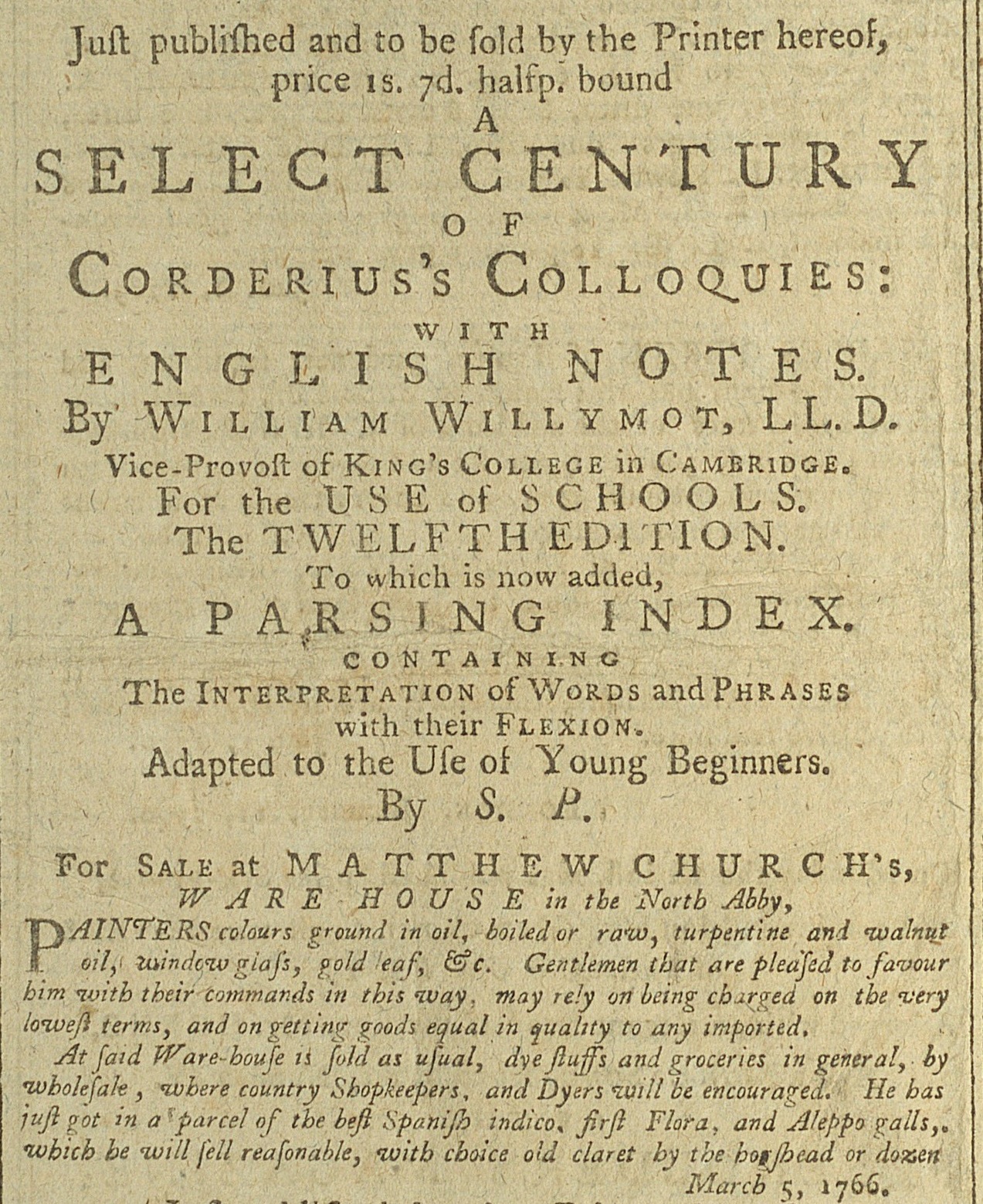 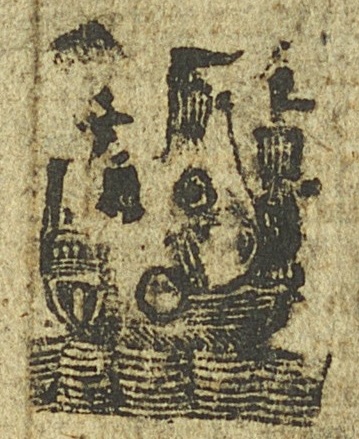 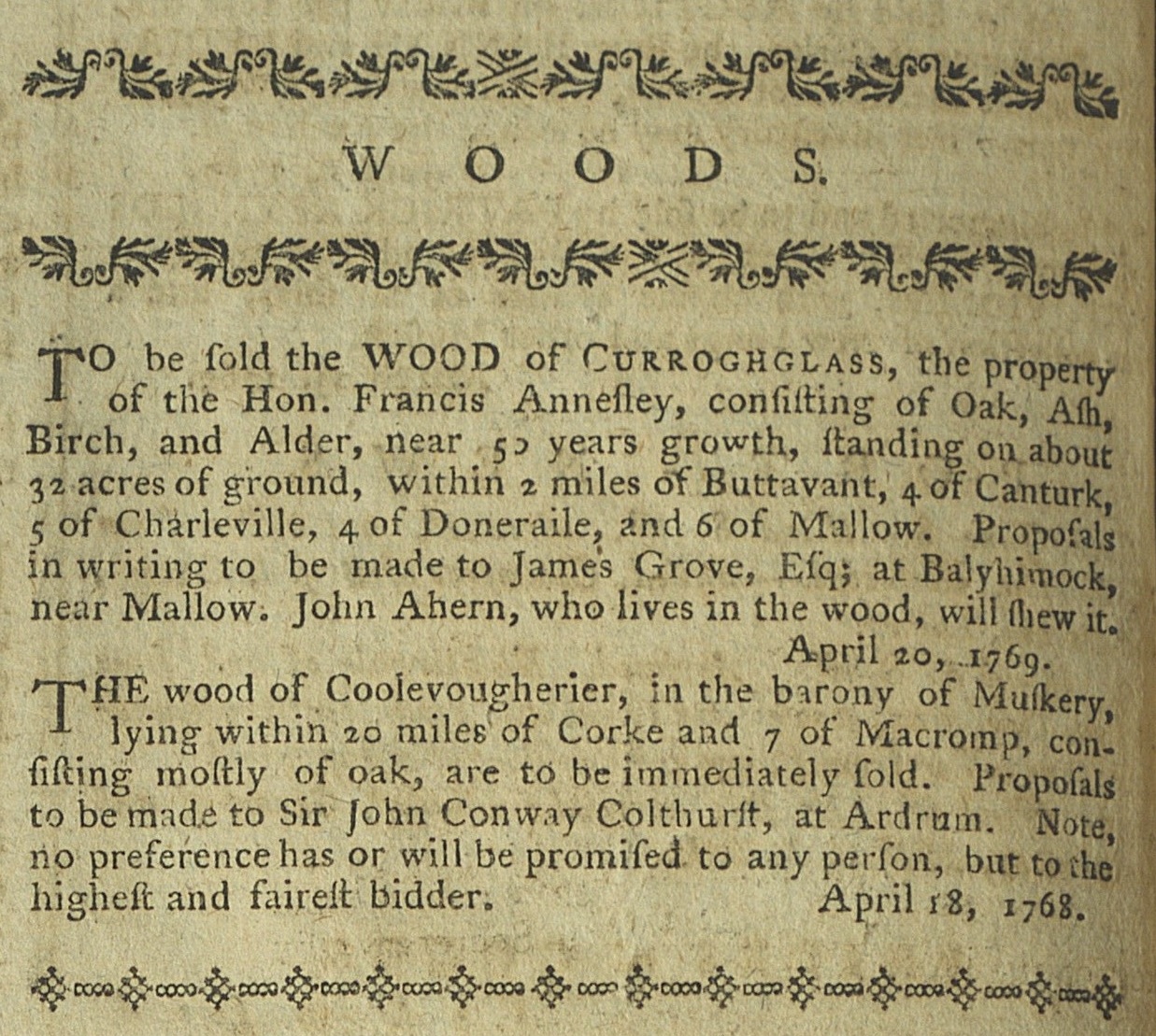 Six years before his death, and newly located to Fishamble Lane (the present-day Liberty Street), Swiney evidently acquired a set of music type. As far as can be ascertained, this is the only instance of such music printing in any 18th century Irish newspaper. As UCC only holds an incomplete run of The Corke Journal for 1771, it is likely than several more pieces were printed, and Swiney certainly advertised other pieces for sale separately.

The music shown in this display are taken from several issues of The Corke Journal for 1771 and they are indicative of the fashions of the later 18th century, with several pieces of dance music, some with indications of the steps. Such music was produced in vast quantities throughout Ireland and Britain, and would have been used at the many assemblies and balls held in Cork - in the Music Rooms on Tuckey Street, or the Assembly Rooms on George’s Street (the modern Oliver Plunkett Street).

There are also three songs, two taken from the kind of music dramas that were characteristic of the era, and which formed a major part of the repertoire at the Theatre Royal on George’s Street (the site is now occupied by the GPO). Plays in the 18th century were frequently interspersed with songs and dances of various kinds, and the division between drama and opera was fluid. Similarly, actors were expected to possess at least a rudimentary voice, and singers to be able to acquit themselves on the stage in a variety of roles. Songs were also used for domestic music-making and the increasingly prosperous middle class of Cork would have been a ready market for these.

Music in the Corke Journal 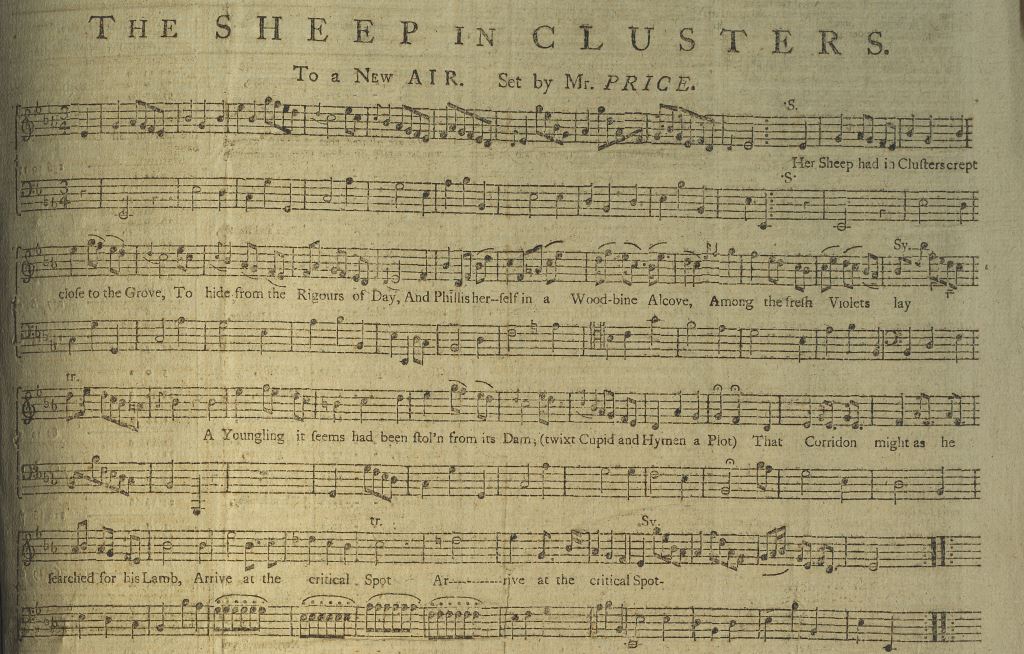 The Sheep in Clusters

Air: The Sheep in Clusters 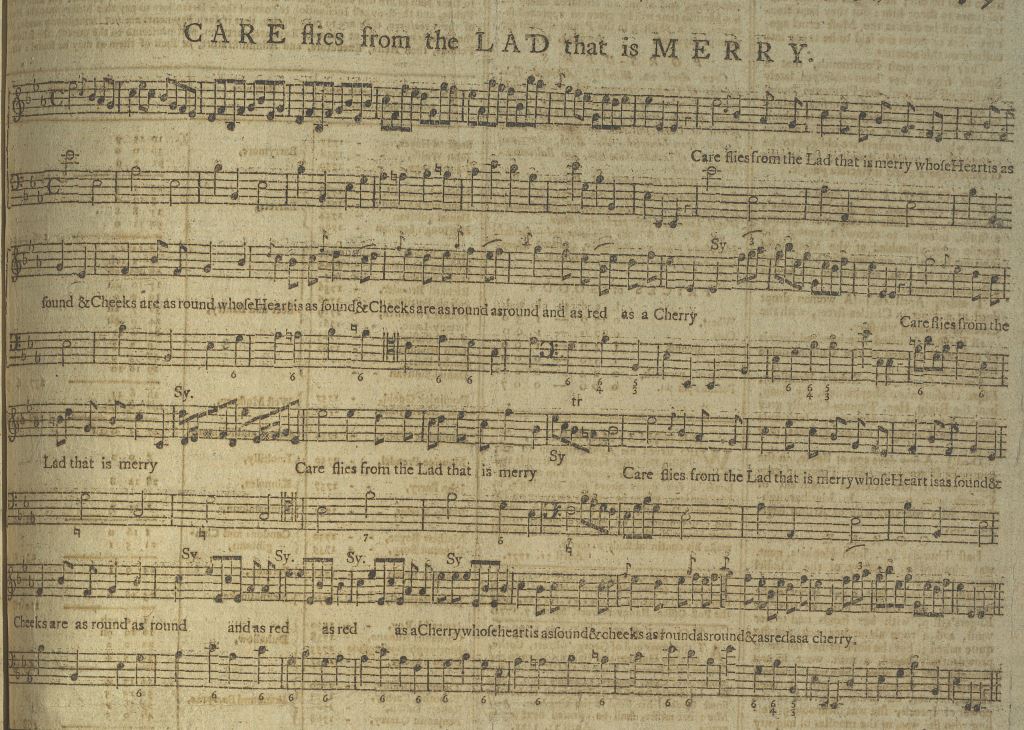 Care flies from the Lad that is Merry

Air: Care flies from the Lad that is Merry

This is an aria from the dramatic romance Cymon, first staged at Drury Lane in London in January 1767.  The libretto was by the actor-manager David Garrick (1717-1779), based on Dryden’s poem of the same name); with the music supplied by Michael Arne (c1740-1786).  UCC Library's Special Collections also holds a copy of the score of this opera, printed by Longman and Broderip in London.

The work would have been of local interest as it was performed at the Crow Street Theatre in Dublin in March of 1771, and the same company brought it to Cork in September of the same year.

These are simple dances for use at balls and assemblies.  Some indication of the steps is given with the jig. 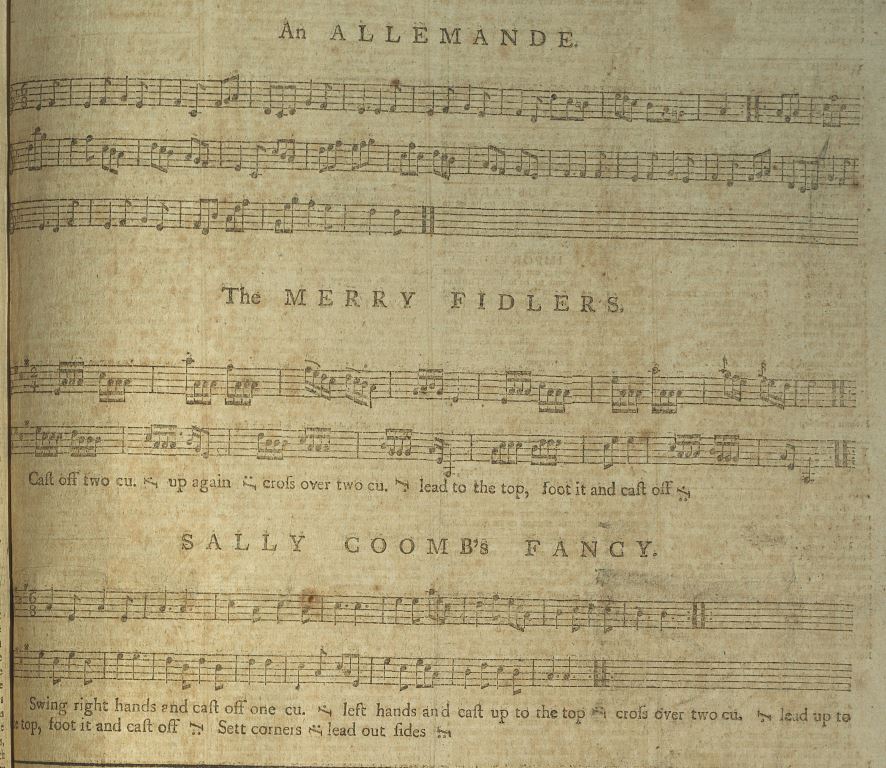 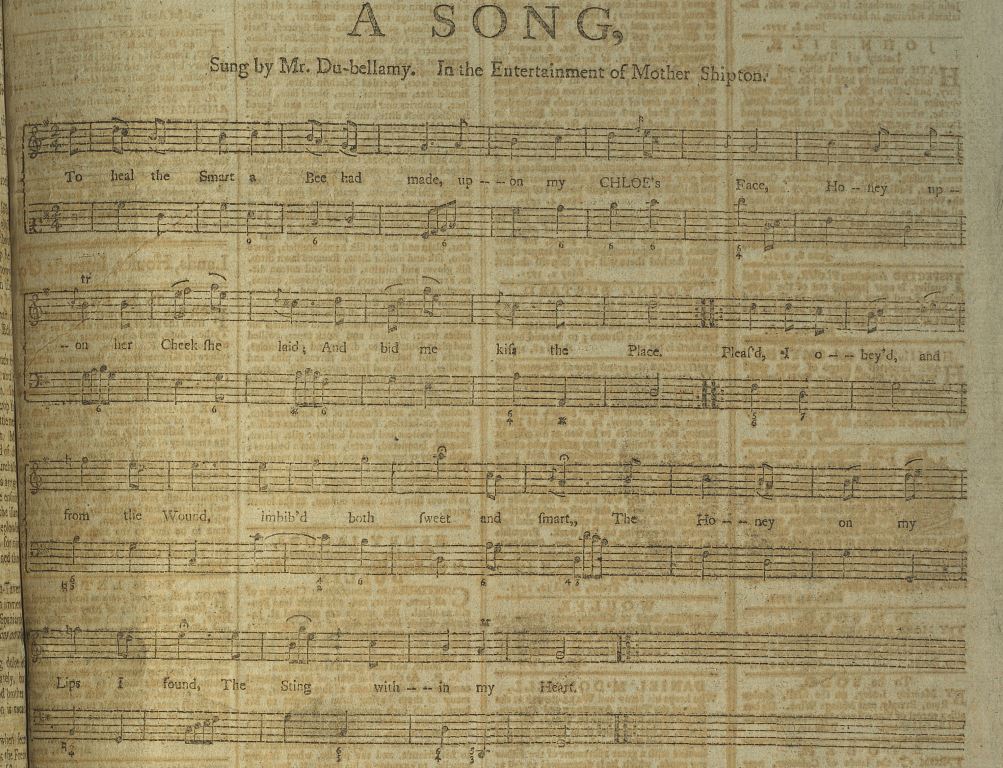 A Song, sung by Mr Du-bellamy, To heal the Smart a Bee had made

A Song, sung by Mr Du-bellamy: To heal the Smart a Bee had made

Another recent work, this is taken from a pantomime entitled Mother Shipton, given at Covent Garden in December 1770, with music by Samuel Arnold (1740-1802), and starring Charles Clementine Dubellamy, the stage name of John Evans (d 1793).

Listen to the Music!

A version of Care Flies from the Lad that is Merry .