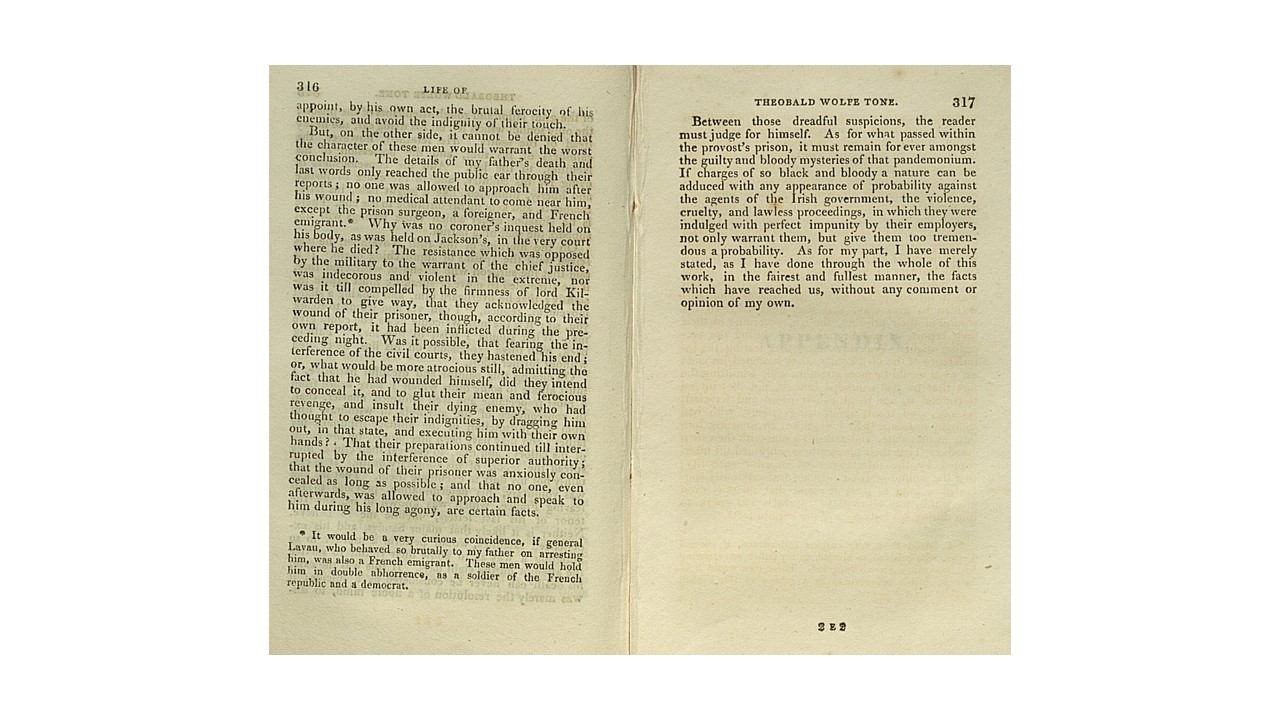 Tone was a major writer and thinker of the 1790s and was to become a major revolutionary figure among the United Irishmen in the period leading to the Rebellion of 1798. He saw the substitution of ‘the common name of Irishman in the place of the denominations of Protestant, Catholic and Dissenter’ as the means to achieve his ‘object’, namely, the subversion of ‘the tyranny of our execrable Government’ and the attainment of Irish independence. Charged with a mission of obtaining French support, Tone was by 1796 an adjutant-general in the French army and collaborated closely with General Hoche in planning an invasion of Ireland. A fleet of forty-three ships carrying 14,450 troops and a supply of uniforms and cockades for the Irish expected to join them set sail in December 1796. The expedition, which encountered heavy storms, ended in disaster: though it did raise morale among the United Irishmen, who had proclaimed themselves 'partners in revolution' with the French, only a small number of troops landed and only thirty-five ships were eventually to return to France. (DIB; ODNB)

Tone, Wolfe. The Life of Theobald Wolfe Tone: written by himself, and extracted from his journals. London: Whittaker, Treacher and Arnot, 1830. [Older Printed Book Collection] 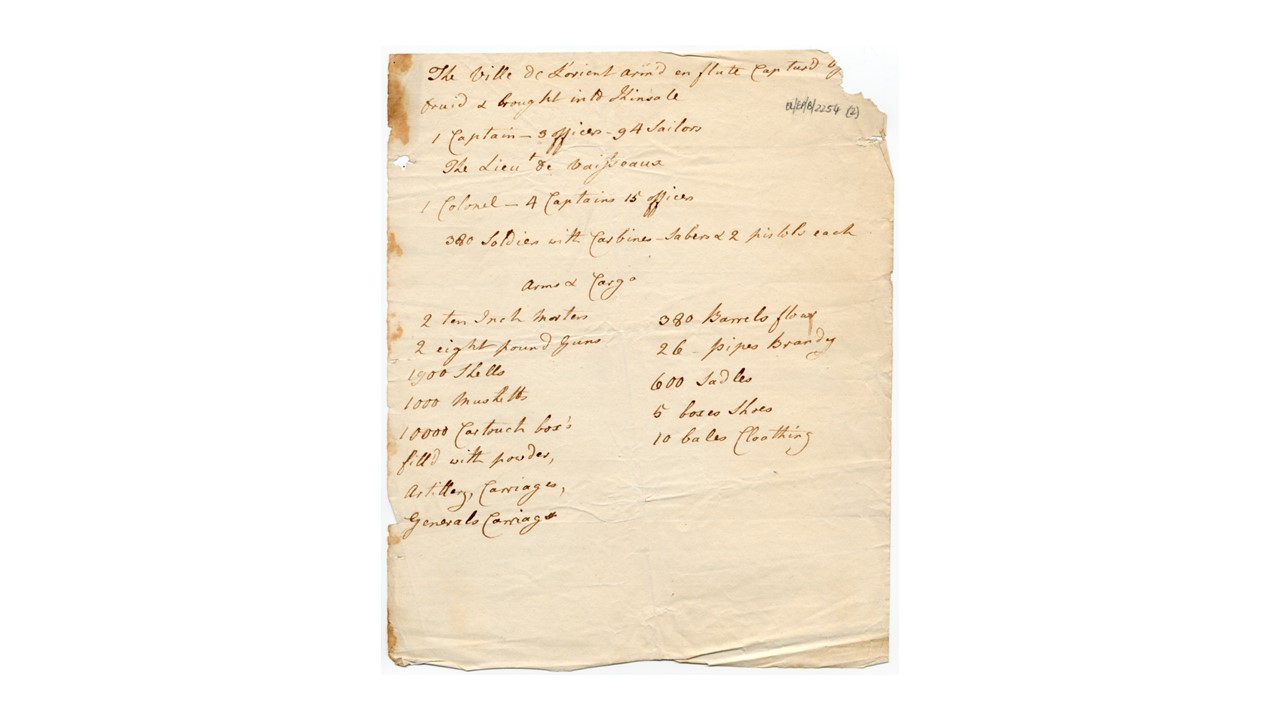 The State of the French Fleet

Ms report on the numbers amassed by the French fleet set to invade Ireland, the types of ships and their provisions, with a detailed account of the manifesto of the ship La Ville de L'orient which was captured by The Druid and brought into Kinsale. This collections was donated by the White family of Bantry House. In 1796, Richard White, later first Earl of Bantry, was instrumental in alerting the Army Headquarters in Cork to the appearance of French ships in the bay (DIB)

[The State of the French Fleet, Bantry Estate Collection] 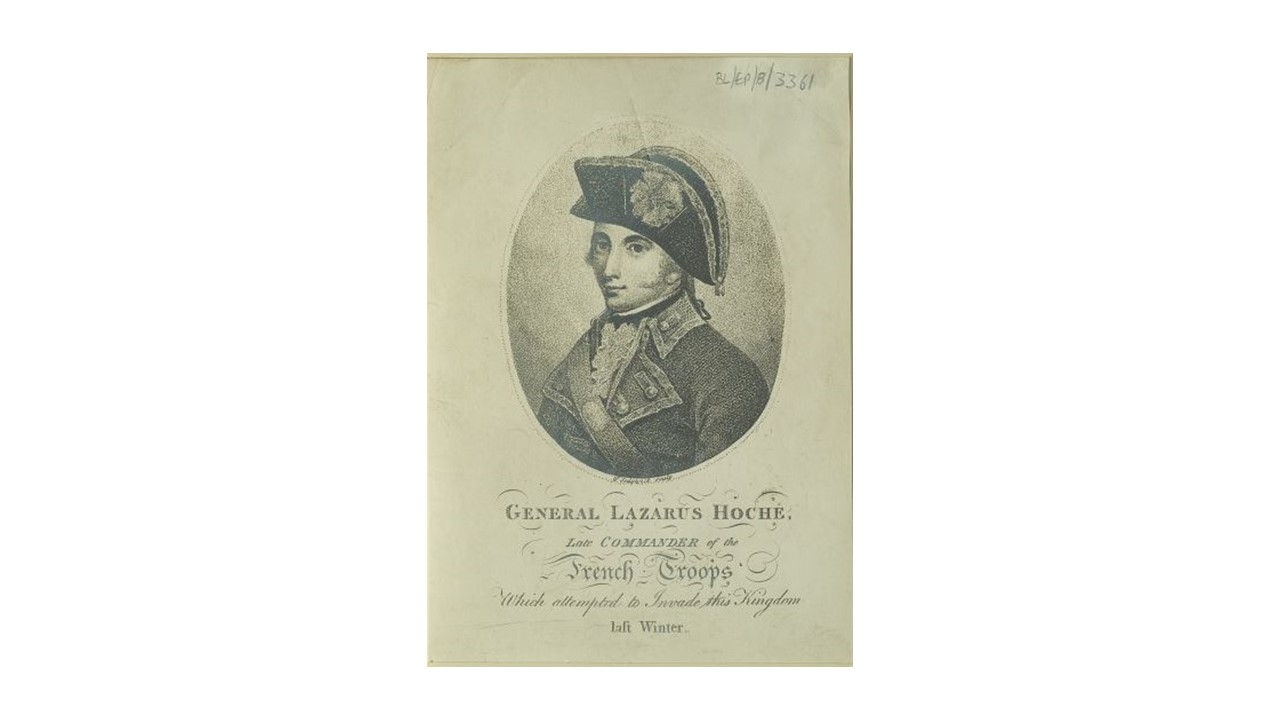 Printed reproduction of General Lazarus Hoche, late Commander of the French Troops, of the Bantry Invasion. Hoche had risen rapidly in the Revolutionary Army becoming a General by the age of twenty-five. He died of tuberculosis within a year of his expedition. 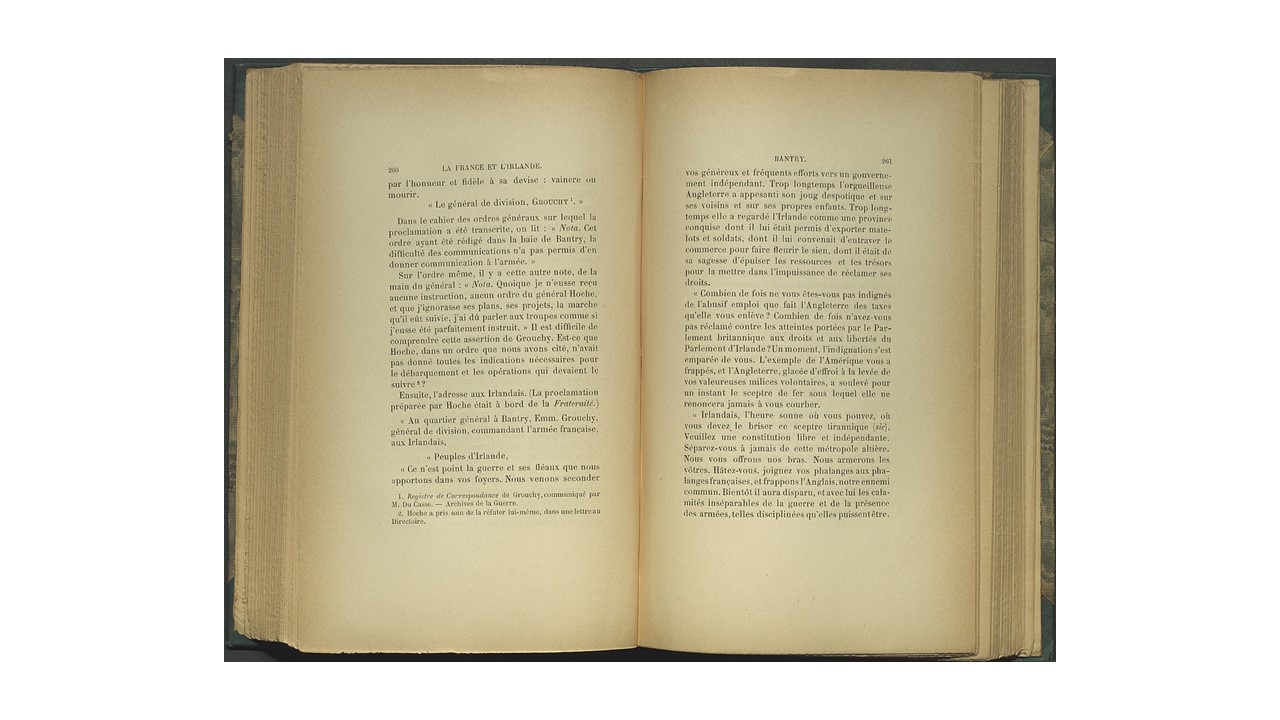 Guillon’s doctoral thesis documents the arrival of the French in Bantry. Grouchy assumed command of the French forces when Hoche failed to make land. His proclamation, which had been composed by Tone in advance of the expedition, assures the native population that their intention is to deliver Ireland from tyranny and to secure its independence. A further French force commanded by Humbert did land in Ireland in 1798; this intervention led, however, to the capture and death of Wolfe Tone, and what came to be termed the Irish Question would dominate the politics of Britain and Ireland for more than a century to follow. 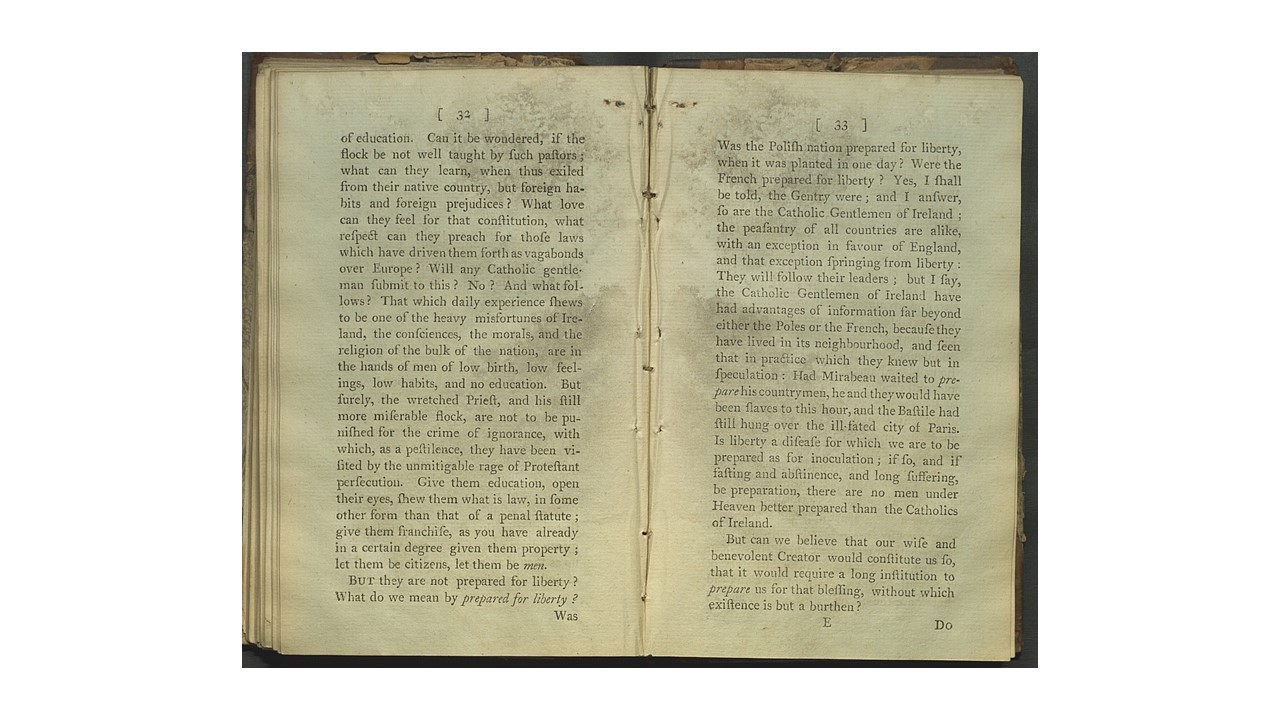 Theobald Wolfe Tone: Catholics: an argument on behalf of the Catholics of Ireland

This pamphlet had an immediate impact on Catholics and Presbyterians alike, prompting the latter to invite Wolfe Tone to Belfast in October 1791 to help found the Society of United Irishmen.

Catholics: an argument on behalf of the Catholics of Ireland, in which the present political state of that country and the necessity of a parliamentary reform are considered; addressed to the people, and more particularly to the Protestants of Ireland. Dublin: P. Byrne, 1791. [St Fin Barre's Cathedral Collection] 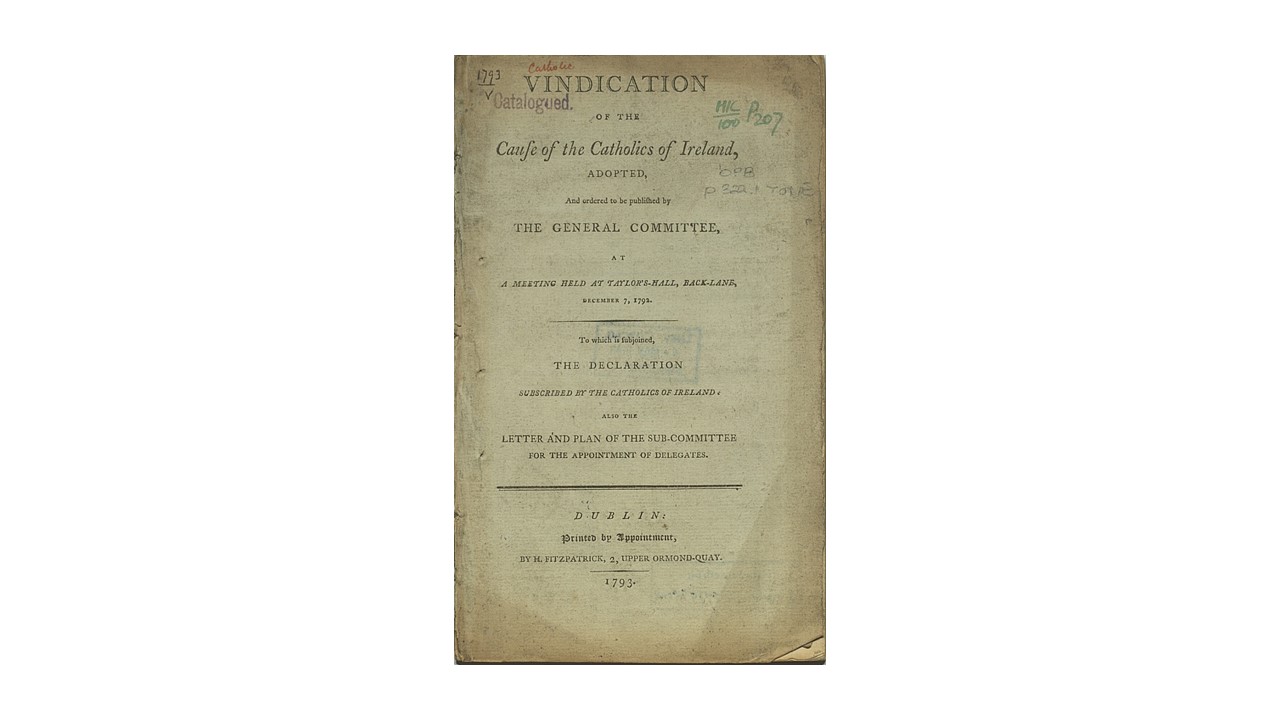 Vindication of the Cause of the Catholics of Ireland

Wolfe Tone also became agent and secretary of a newly radicalized Catholic Committee, leading to the convention in December 1792 on which this pamphlet reports. 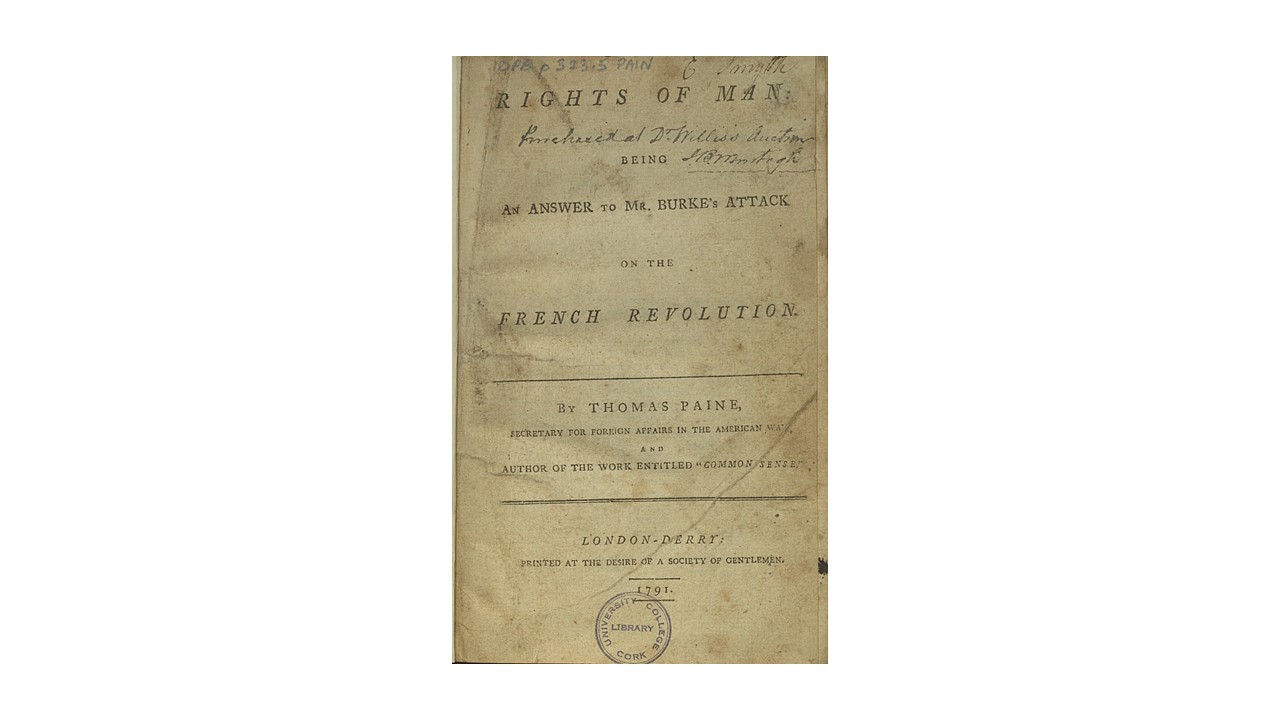 Thomas Paine: The Rights of Man

Paine’s response to Burke was widely read alongside Tone’s treatises in the course of the 1790s; this is one of several editions printed in Ireland and includes an excerpt from Williams' Letters from France, in which she describes the rejoicings at Paris' on the day of the Fête de la Fédération in 1790.

Paine, Thomas. The Rights of Man: being an answer to Mr Burke’s attack on the French Revolution. London-derry: Printed at the desire of a society of gentlemen, 1791. [Older Printed Book Collection] 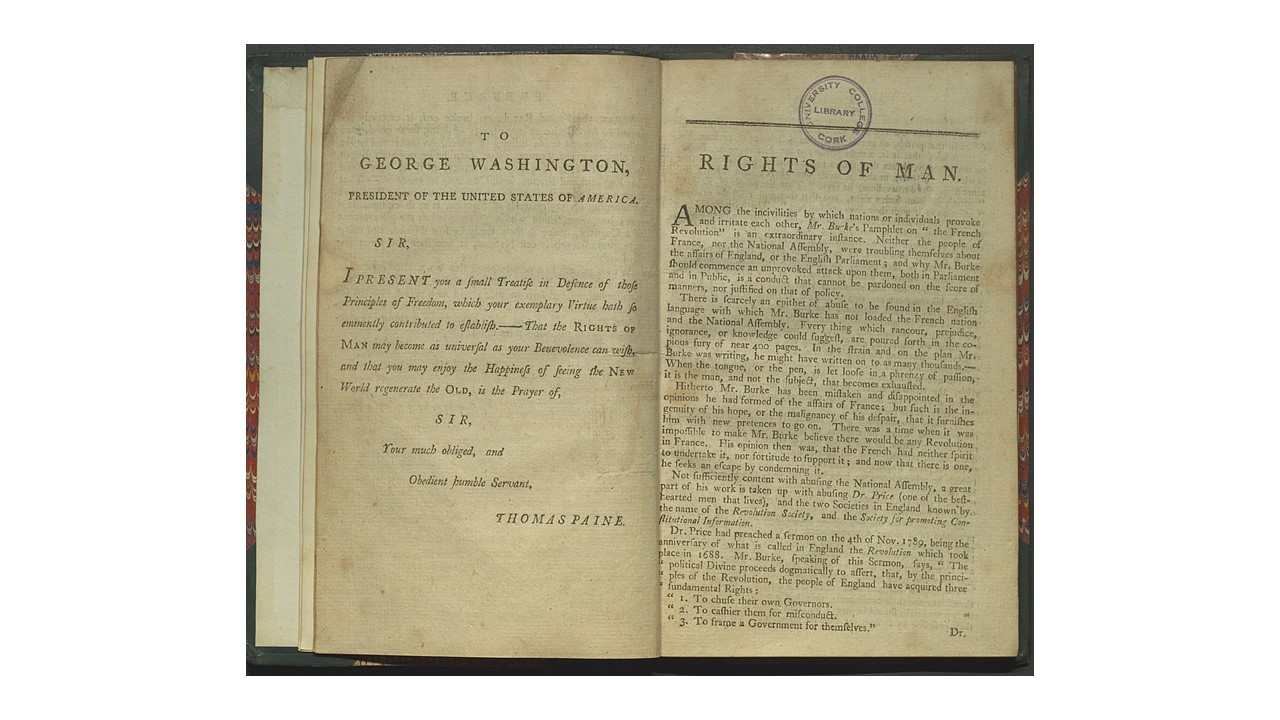 Thomas Paine: The Rights of Man

Paine, Thomas. The Rights of Man: being an answer to Mr Burke’s attack on the French Revolution. London-derry: Printed at the desire of a society of gentlemen, 1791. [Older Printed Book Collection] 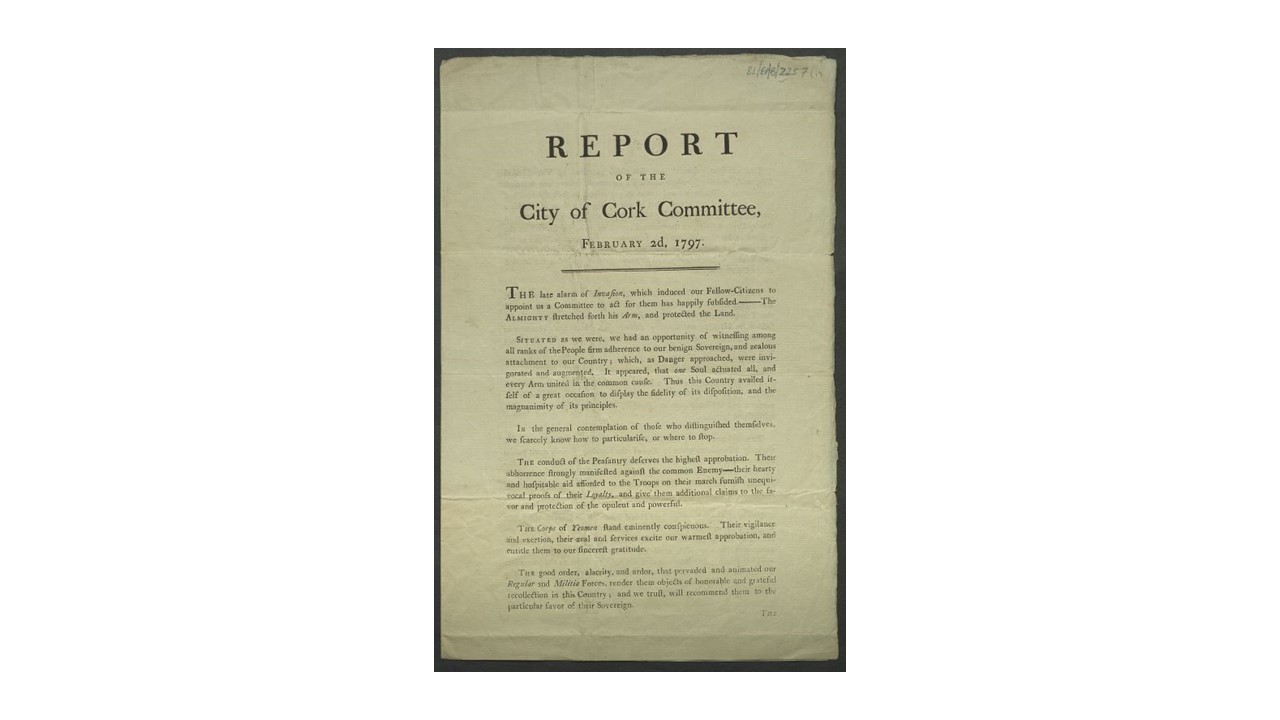 Report of the City of Cork Commitee, 2nd February 1797 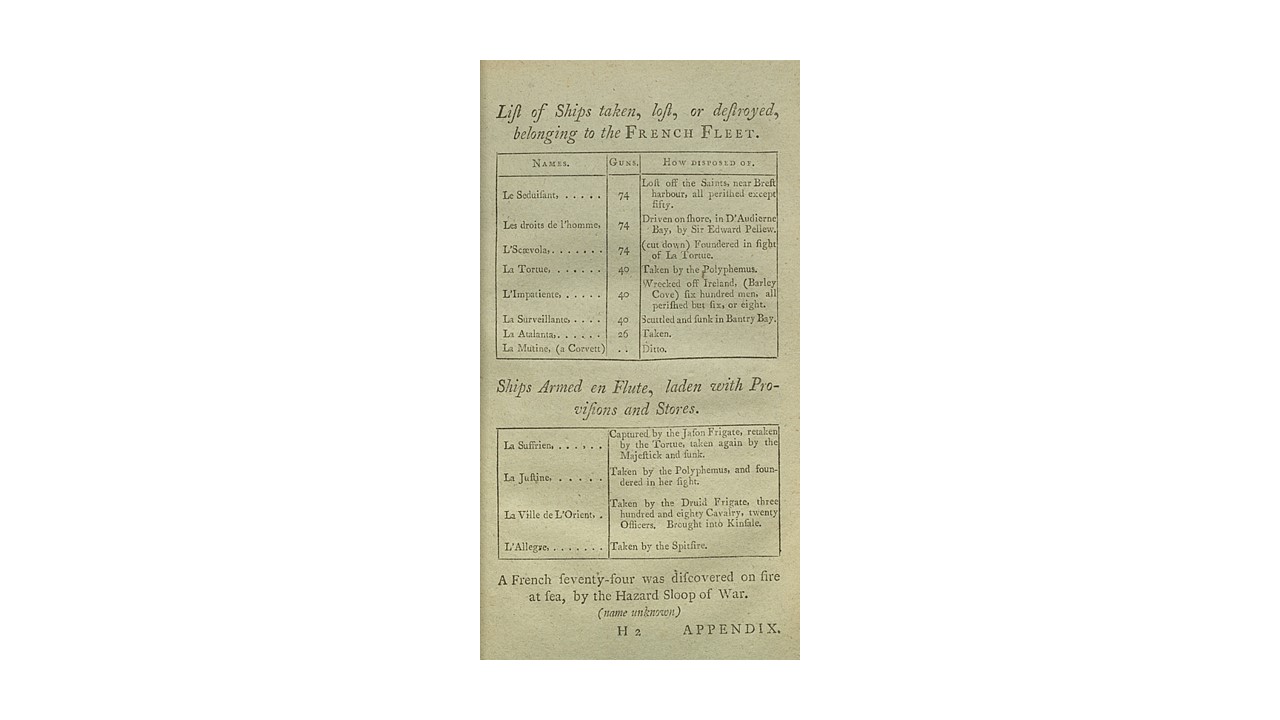 Edward Morgan: A journal of the movements of the French fleet in Bantry Bay

Morgan's journal opens with a preface urging his countrymen to 'beware of that painted semblance of liberty, with which the French think to amuse you' and to 'look to the miserable examples of their conquered neighbours.'

Morgan, Edward. A Journal of the Movements of the French Fleet in Bantry Bay: from their first appearance to their final departure. Cork: M. Harris, 1797. [Munster Printing Collection] 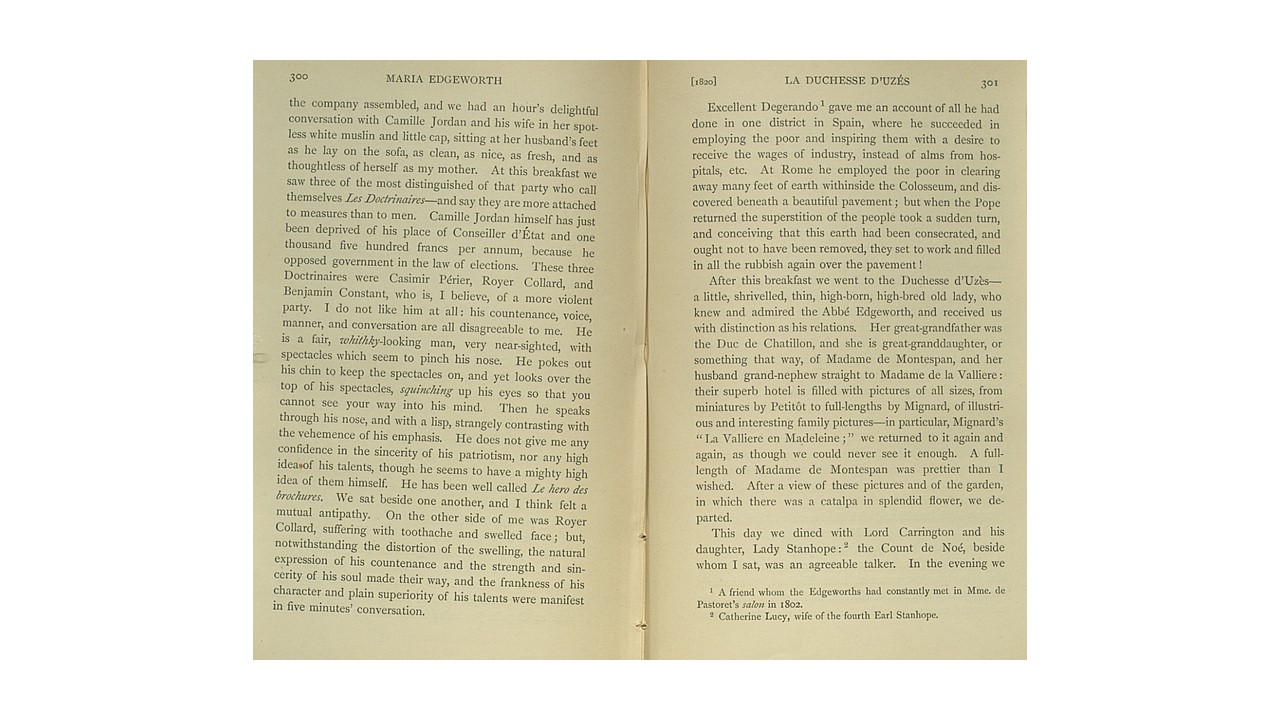 In the summer of 1798, Edgeworth was forced to flee her home in Edgeworthstown in County Longford in the face of the advancing French invasionary force. Her novel Ormond: A Tale, published in 1817 is set in eighteenth-century France and Ireland, though leans ultimately towards an identification of Ireland with England. Mme de Staël disparagingly commented on the 'triste utilité' of her realist novels, which were widely read in France. Edgeworth reports here on a meeting in Paris in July 1820 with three Doctrinaires, among them Benjamin Constant, to whom she takes a particular dislike. (DIB; ODNB)