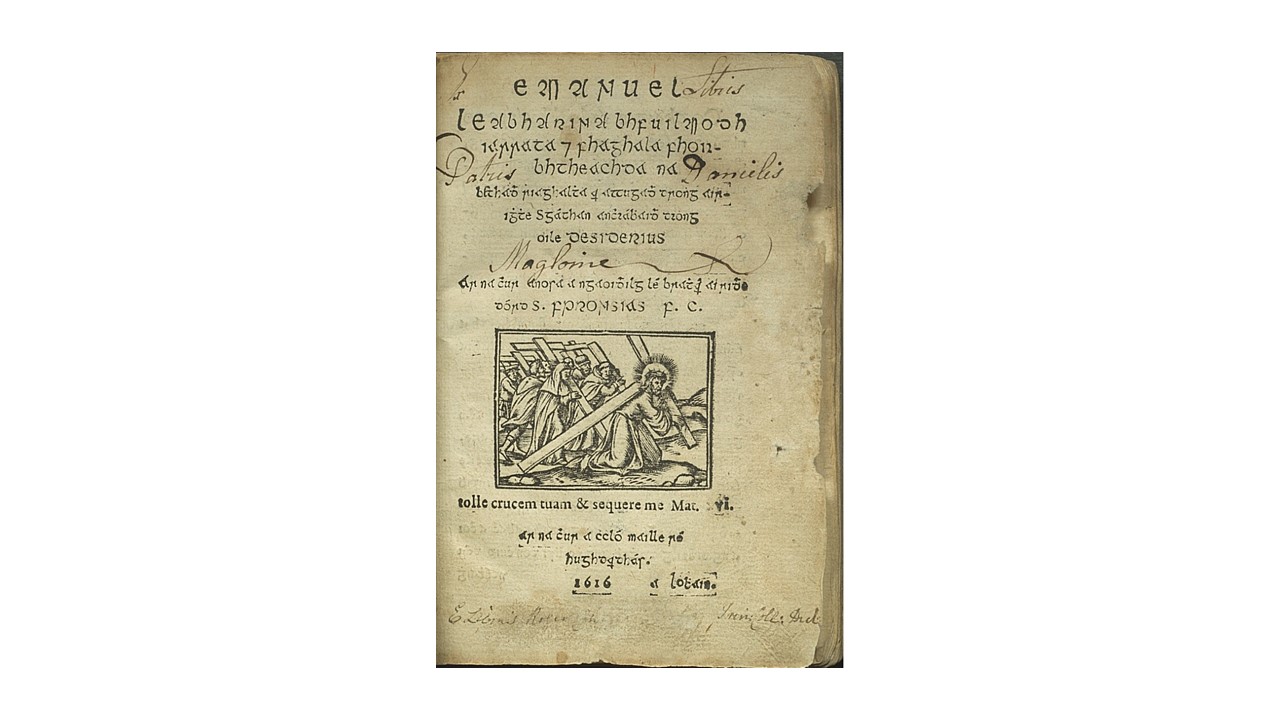 An allegorical pilgrimage narrative of unknown authorship, this work was originally published in Catalan as Tratado llamado el Desseoso in 1515. Florence Conry, also known as Flaithrí Ó Maolchonaire, was a Franciscan friar and Archbishop of Tuam, who had studied in  Salamanca and was present at the Battle of Kinsale in 1601. He was an active opponent of the English interest in Ireland and his many interpolations in this translation were intended to sustain Irish resistance in the face of oppression. 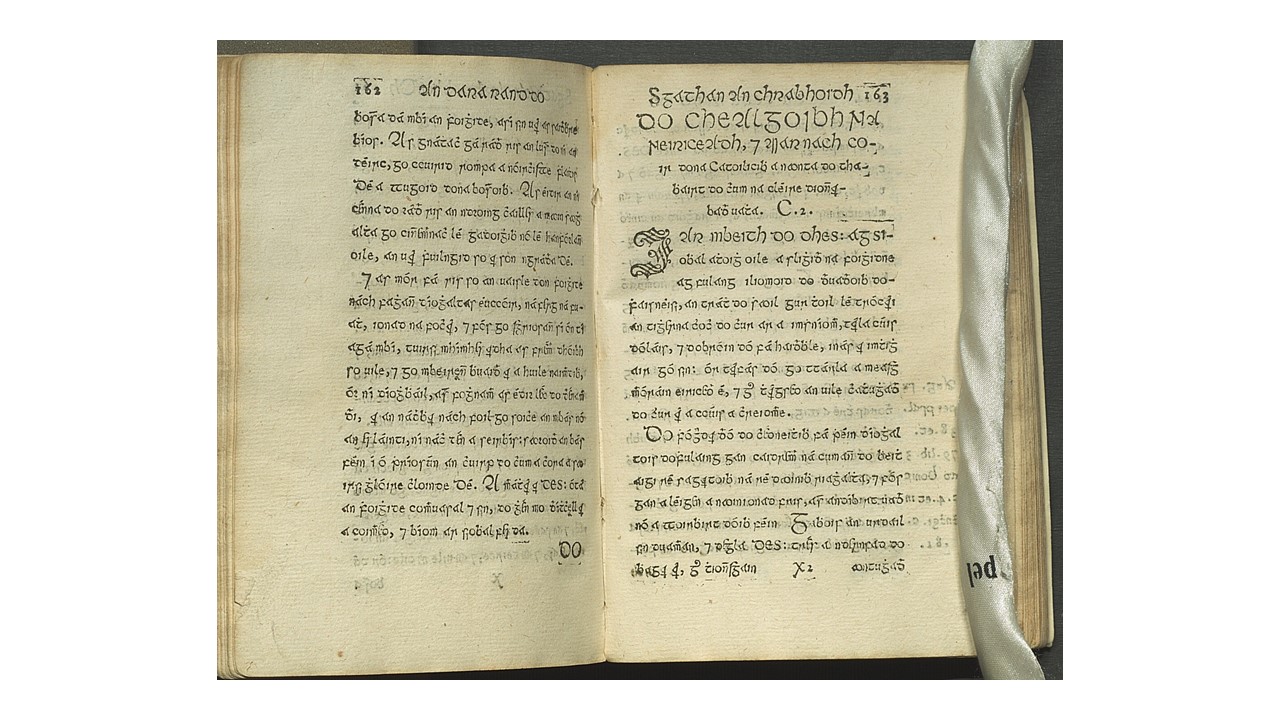 Emanuel was printed at the Franciscan College in Louvain, of which Conry was a founder in 1607, using the newly created Louvain Irish type. (DIB; ODNB) 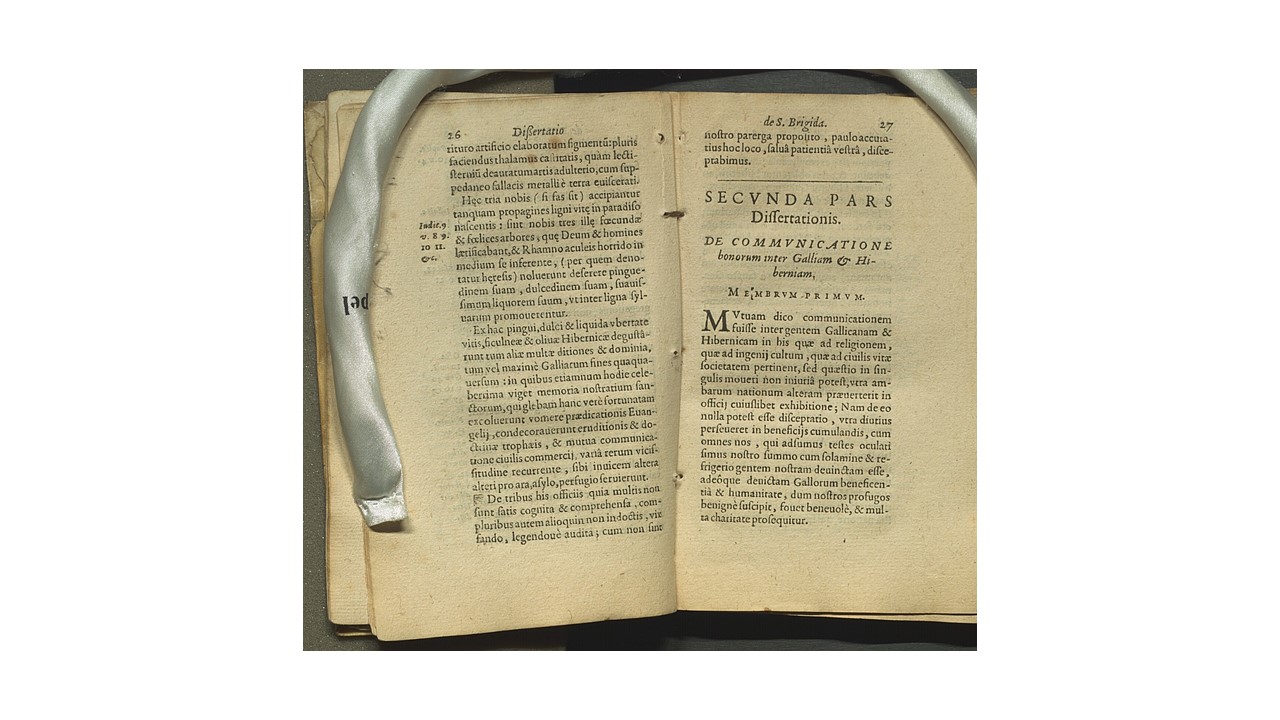 Rothe was bishop of Ossory and a member of a well-established Old English mercantile family. A student at Douai, where he became prefect of the Irish college, he held his see for thirty years, was for a period the only resident Irish Catholic bishop, and actively implemented Tridentine pastoral and diocesan reforms. This work, drawing on a sermon delivered on her feast day in the Irish college in Paris, presents Brigid as a model of Counter-Reformation spirituality. Rothe also describes the ancient ecclesiastical and other links between Ireland and France, likening these to the miracle of the wood of an altar growing green once more at Brigid's touch (DIB; ODNB) 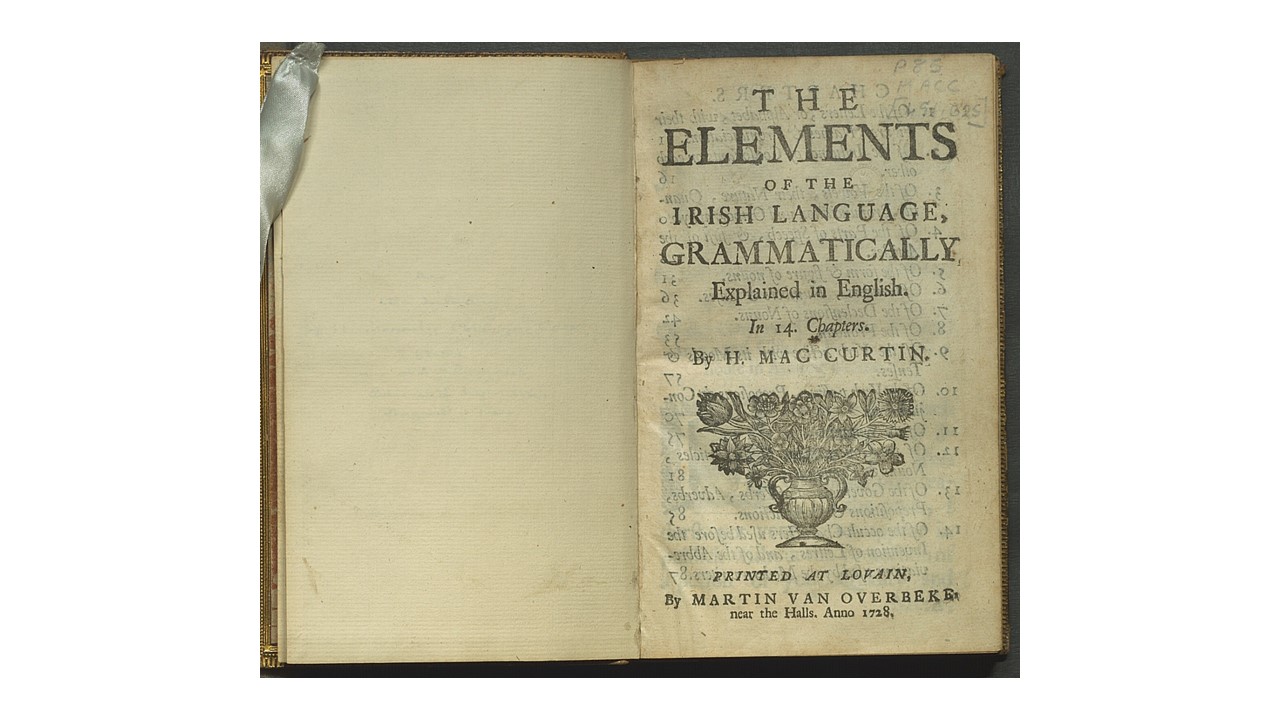 MacCurtin was a member of a family belonging to the hereditary learned caste of Gaelic society serving the O’Briens of Thomond as chroniclers. The author of a substantial body of Jacobite verse, he travelled to Louvain probably in 1727, where he published this work, which is very largely derived from an unpublished Grammatica Anglo-Hibernica of Francis Walsh, a Franciscan. (DIB) 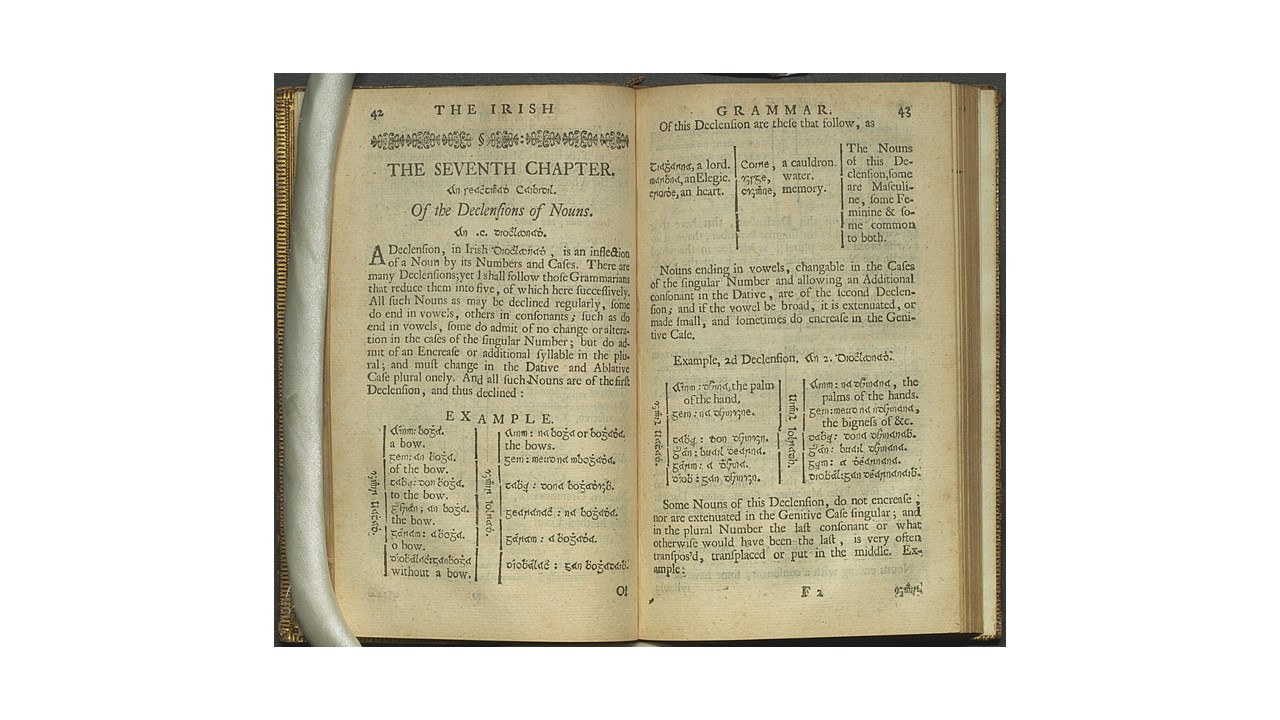 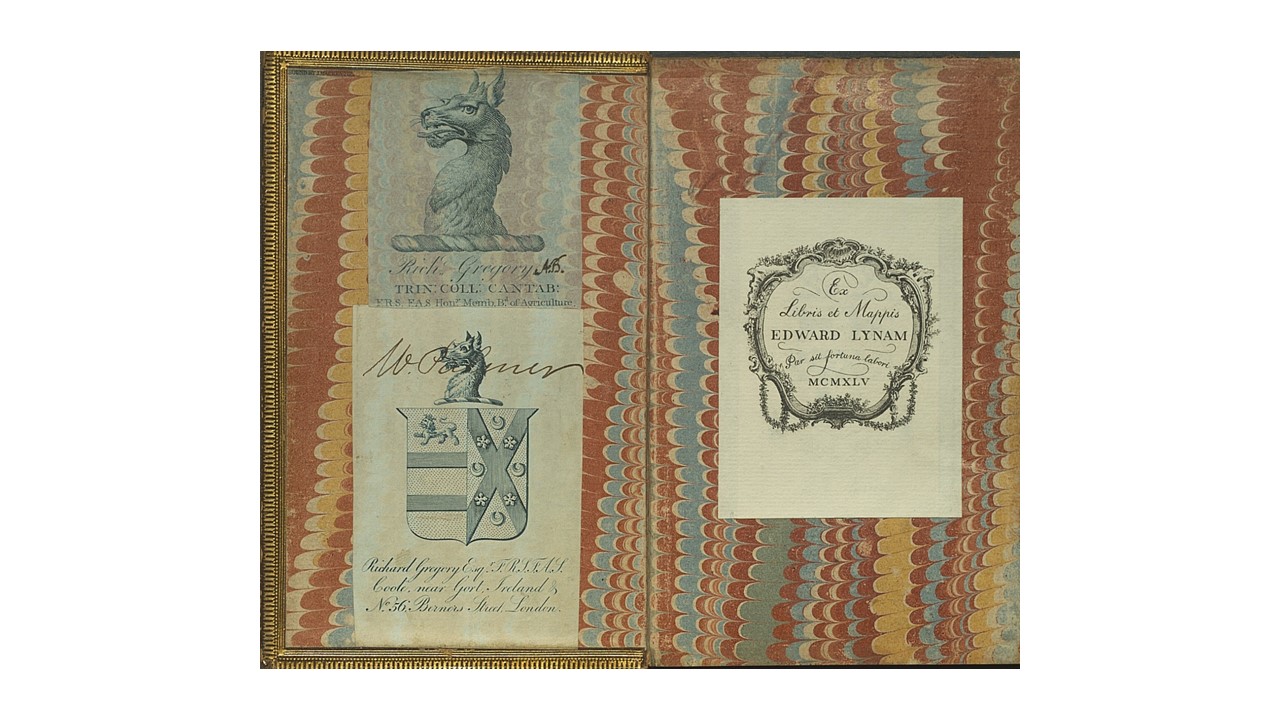 This copy of The Elements of the Irish Language has a number of different bookplates of successive owners on the book's endpapers:

Lynam was Superintendent of the Map Room in the British Library from 1931-1950. 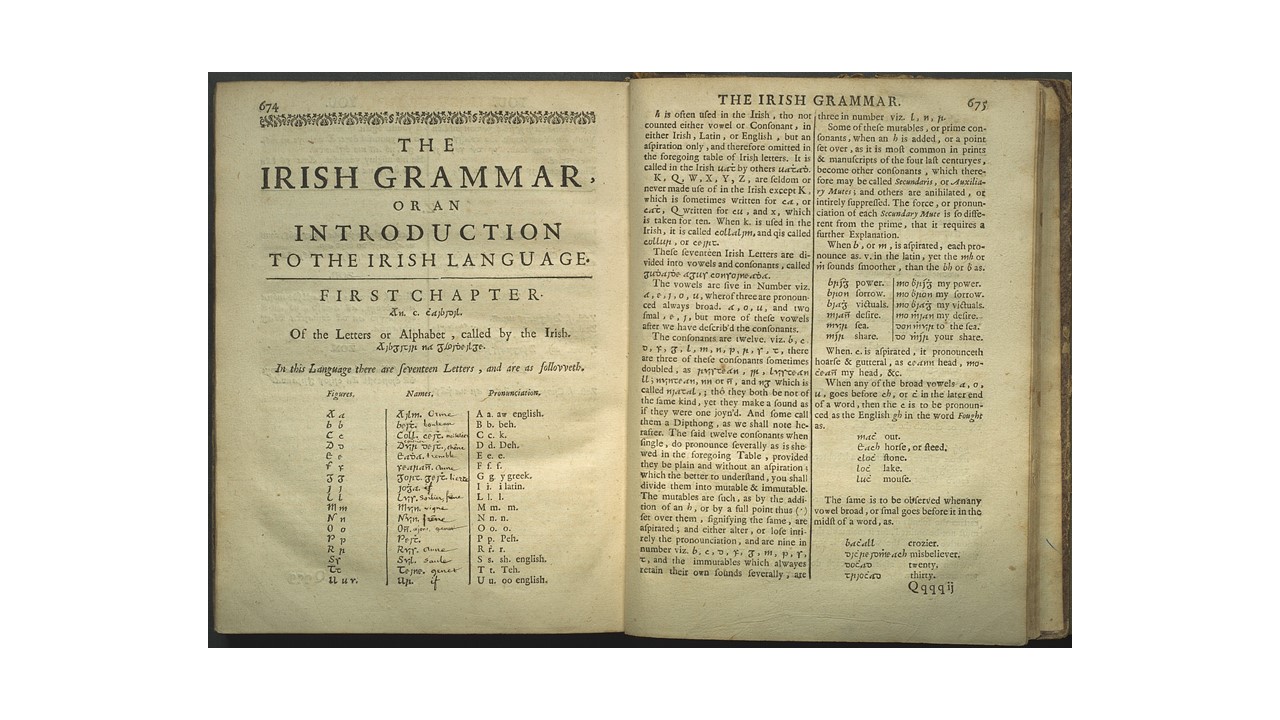 O’Begly, who was assisted by MacCurtin, by then resident in Paris, in the preparation of this work, the first comprehensive English-Irish dictionary, defends the excellence of Irish against attacks on the part of Swift and others. The work was partly modelled on Abel Boyer's Dictionnaire royal. (DIB) 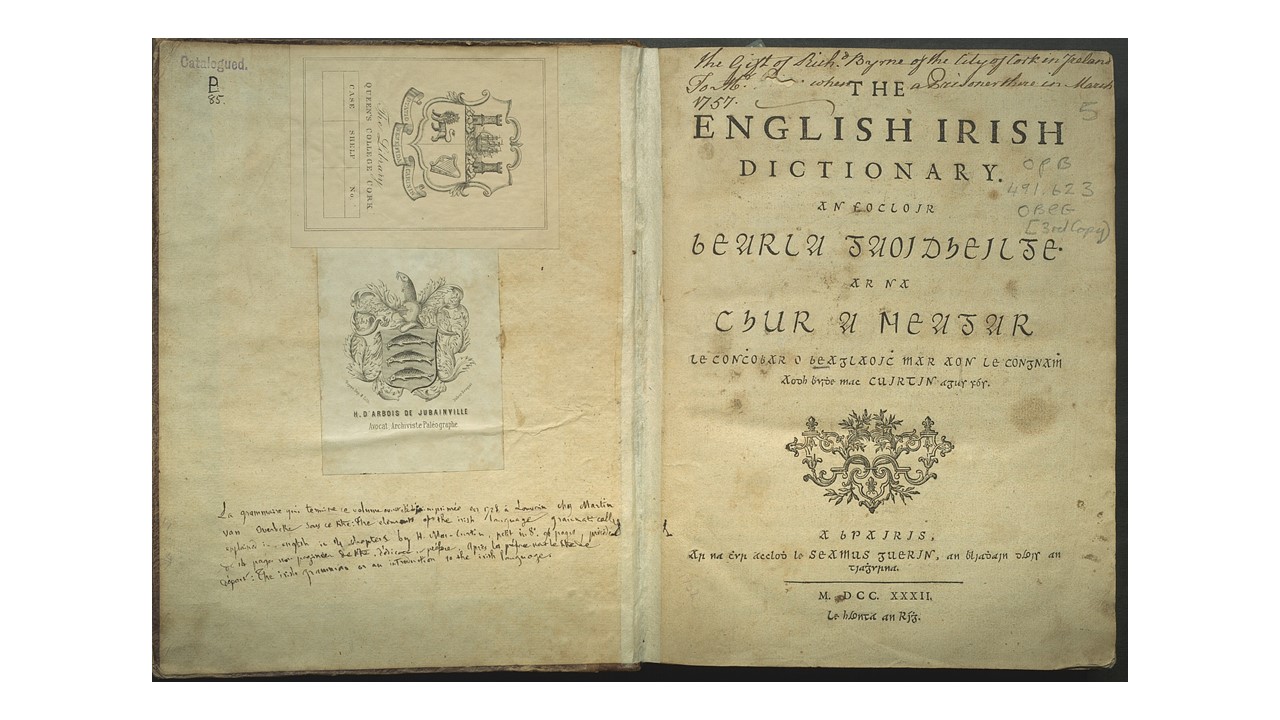 This item has extensive provenance information: 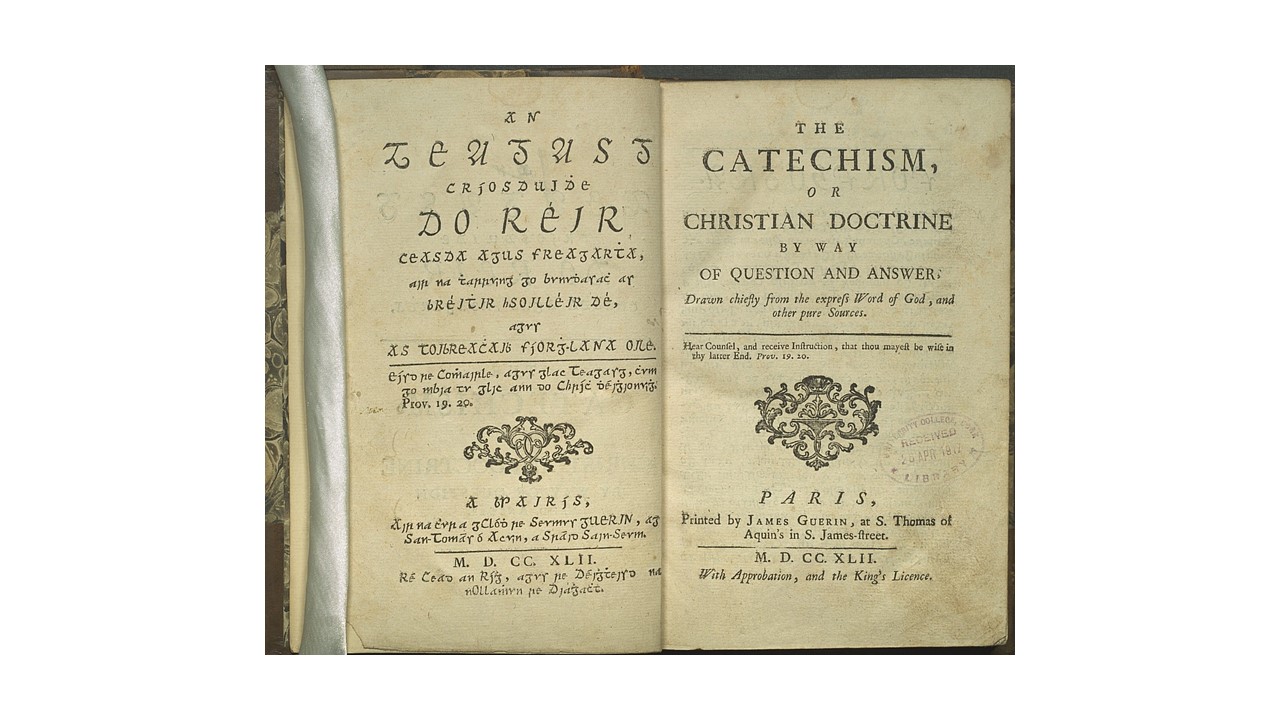 Andrew Donlevy. Teagasg críosduidhe do réir ceasda agus freagartha - The catechism: or, Christian doctrine by way of question and answer

Andrew Donlevy, a Catholic priest, entered the Irish college (then located in the Collège des Lombards) in Paris in 1710. An teagasg Críosduidhe was Tridentine in inspiration: Donlevy saw Irish as an essential medium of religious education and sought also to remedy the shortage of catechetical material in Ireland. The text, which is accompanied by a treatise on the Irish language, was written in Irish; the English version is a literal translation (DIB; ODNB)

Donlevy, Andrew. An teagasg Críosduidhe, do réir ceasda agus freagartha — The Catechism; or, Christian Doctrine by way of Question and Answer, Drawn chiefly from the express Word of God, and other pure sources. Paris: James Guerin, 1742. [Older Printed Books Collection] 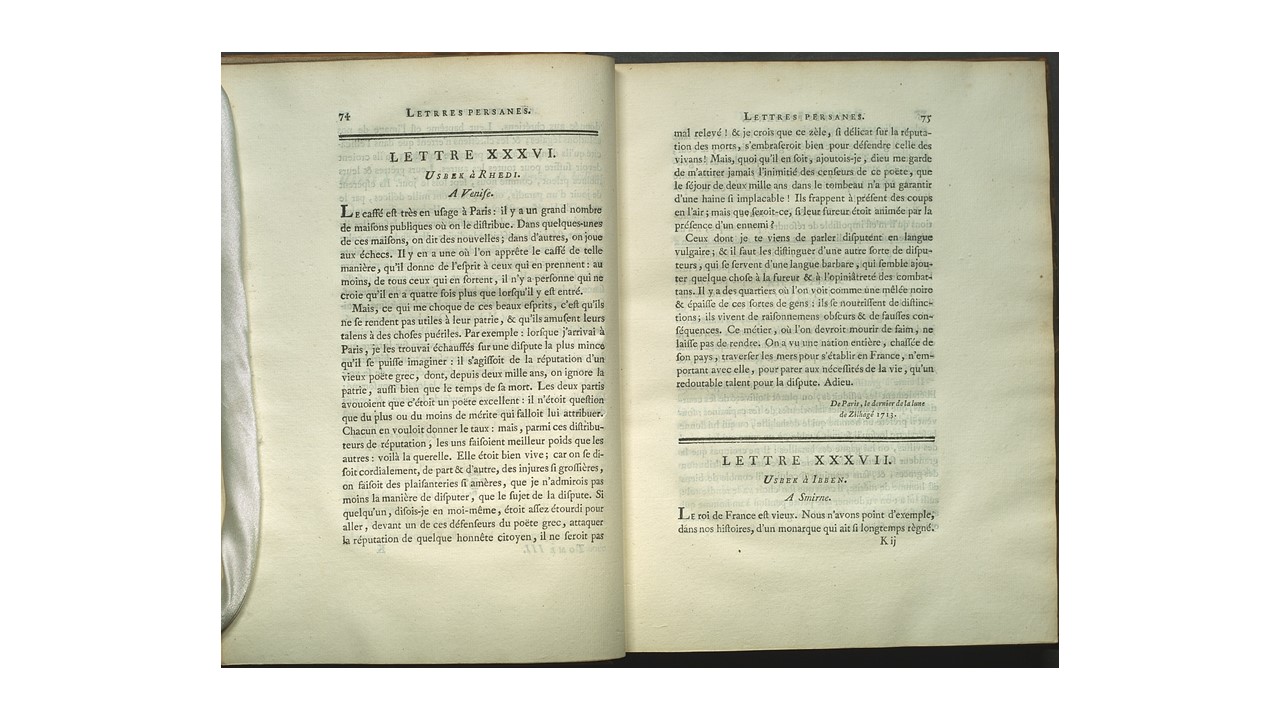 The Irish college in Paris came into existence in the late sixteenth century when a community took up residence in the Collège de Montaigu. Following defeat in the Battle of Kinsale in 1601, the Gaelic lords left Ireland for the continent, followed by priests and scholars in increasing numbers. At the foot of letter XXXVI Usbek comments on a relish for scholastic dispute that is remarkable even by the standards of the Querelle des anciens et des modernes. 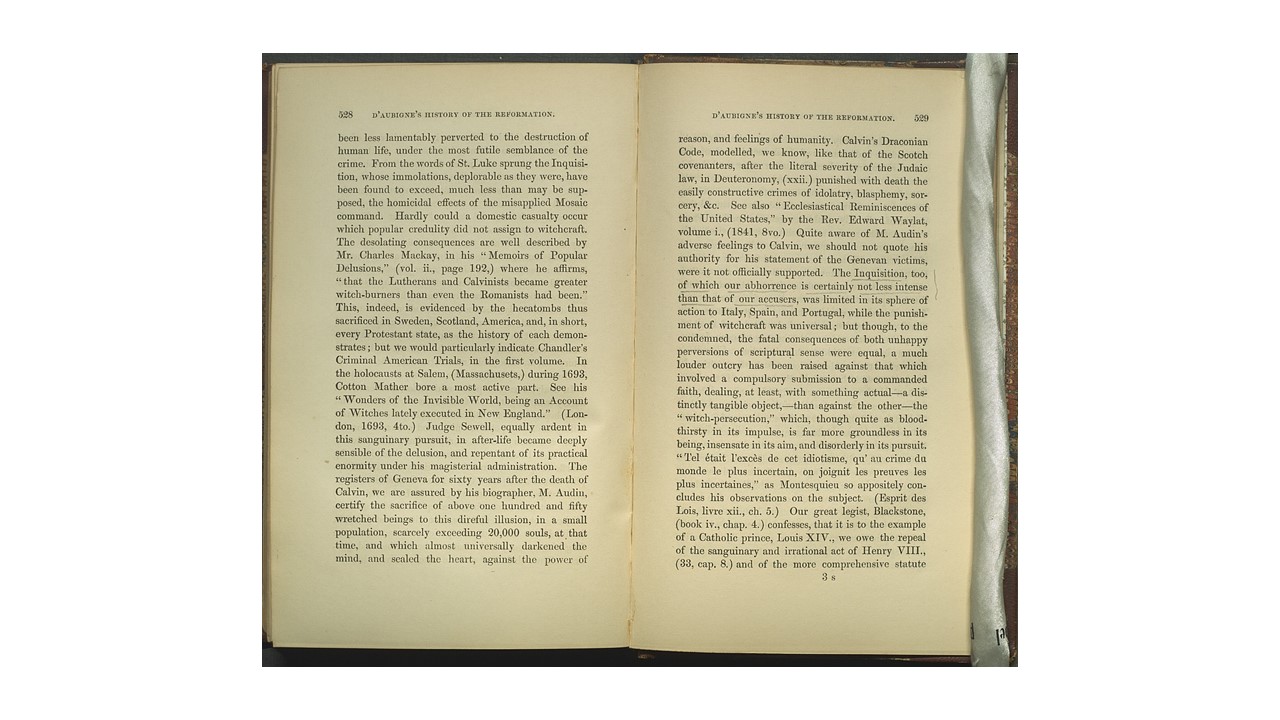 Roche came from an Old English Catholic family and was educated in France. He lived there throughout the period of the Revolution and associated with Vergniaud and Guillotin; after the execution of the former, he was himself arrested and narrowly escaped death. A banker and bibliophile, he again resided in France in the late 1820s and returned to Cork in 1832, where he was an active member of the Cuvierian circle in the city and led the campaign for the establishment of Queen's College, Cork as a liberal and non-sectarian institution. This collection in two volumes was privately circulated and draws on his many contributions in his later years to the Gentleman's Magazine and Notes and Queries, among other outlets; it includes a piece on 'The Universality of the French Tongue' that gives a critical account of Rivarol, on the one hand, and the conservative influence of the Academie francaise, on the other. (DIB, ONDB) 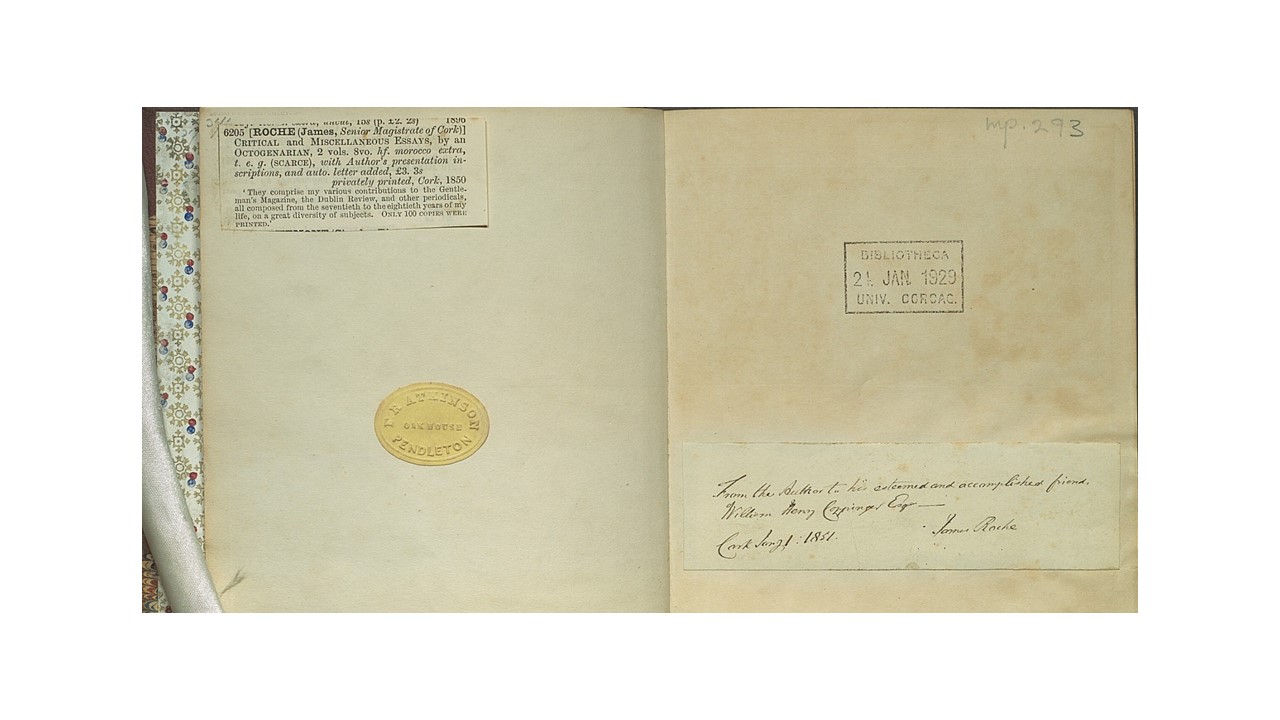 James Roche's handwritten note to his friend William Henry Coppinger in Cork, 1851. The Coppingers were associated with Barryscourt in East Cork. 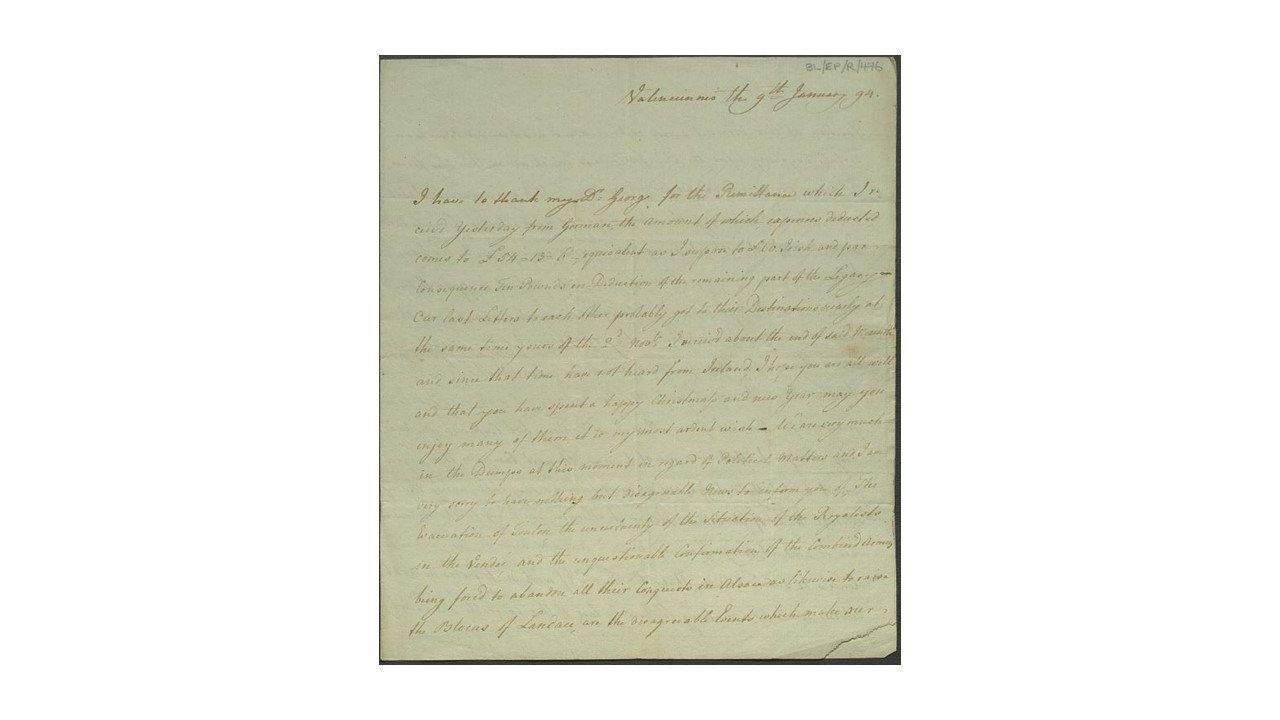 these Tigres must be totally destroy'd

Letter of 9 January to George Ryan from his brother Denis at Valenciennes, with news of the French-Austrian campaign: 'I am very sorry to have nothing but disagreeable news to inform you of. The Evacuation of Toulon, the uncertainty of the Situation of the Royalists in the Vendée and the unquestionable Confirmation of the Combined Armies being forc'd to abandon all their conquests in Alsace [...] One great Effort more must be made the next Campain, these Tigres must be totally destroy'd.'

[these Tigres must be totally destroy'd, Ryan of Inch Collection]