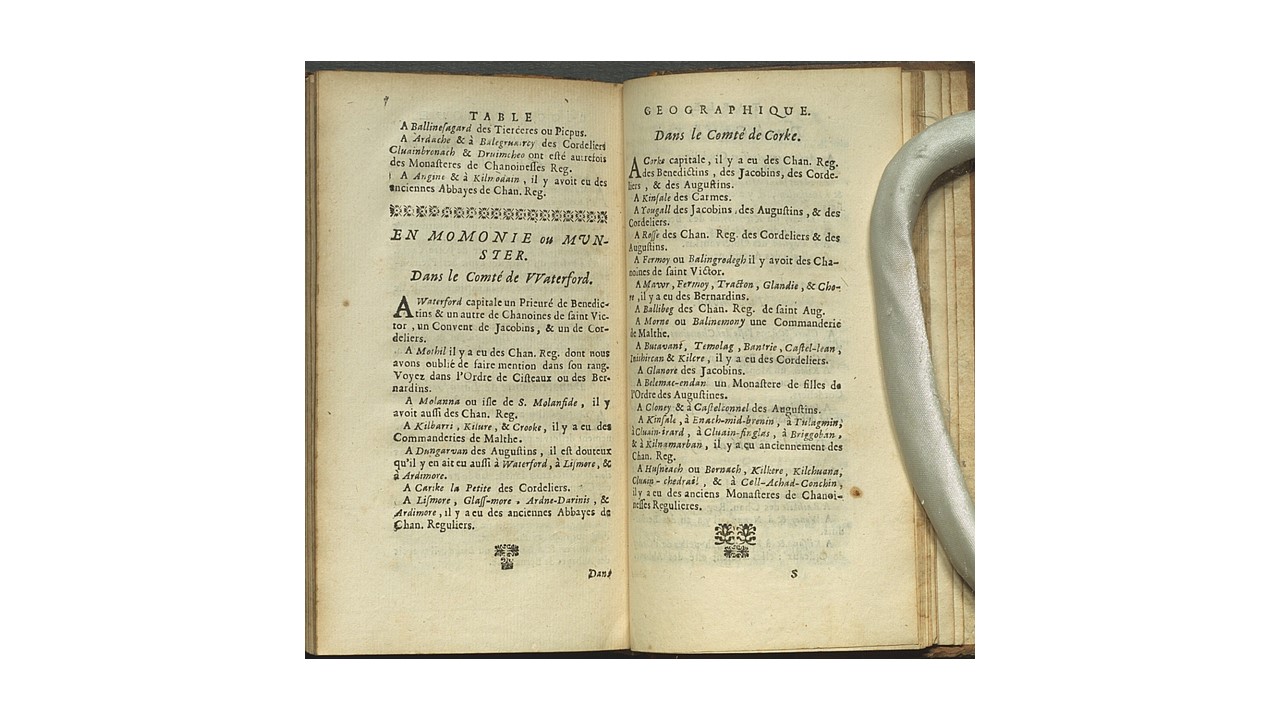 Born a Protestant, Alemand converted to Catholicism in 1676. He was a noted remarqueur, author of Nouvelles observations; ou, Guerre civile des François sur la langue (1688) and a commentator on Vaugelas. This work was dedicated to the recently deposed James II; it was published in the year in which Williamite forces seized control of Cork from James' supporters shortly after the Battle of the Boyne. 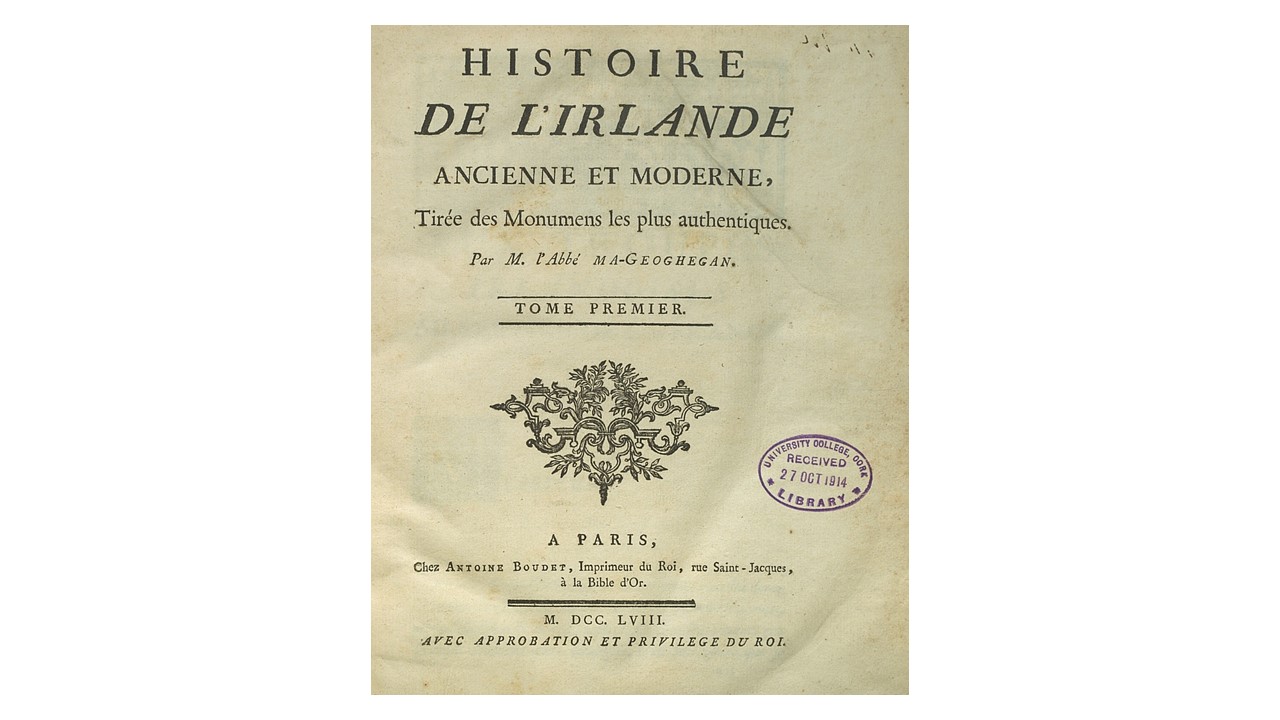 MacGeoghegan was ordained in Reims and obtained an MA in Paris in 1733. He was chaplain to the Irish Brigade in France, to whom he dedicated the Histoire. Drawing on Keating, he offered an account of Gaelic Ireland that is distinctly Catholic and Jacobite in orientation: Gaelic resistance to colonisation on the part of the English and fidelity to the unhappy Stuart dynasty were both rooted in the identification with the latter as co-religionists having a claim to roots in Ireland. This is the first of three volumes of the work; the latter two were printed without royal permission, the result of a shift in relations between France and Britain in the wake of the Seven Years’ War that made MacGeoghegan’s Jacobite sympathies less tolerable to the monarchy. (DIB; ODNB) 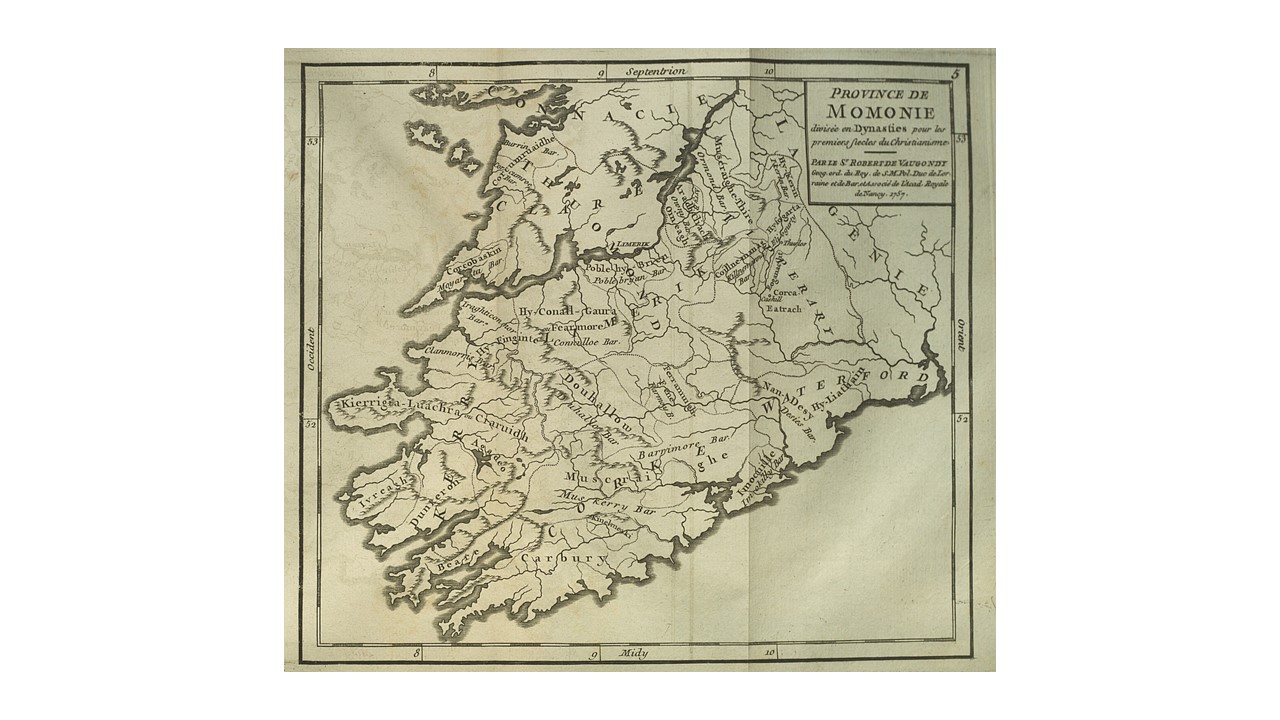 This is one of four maps showing the provinces of Ireland. 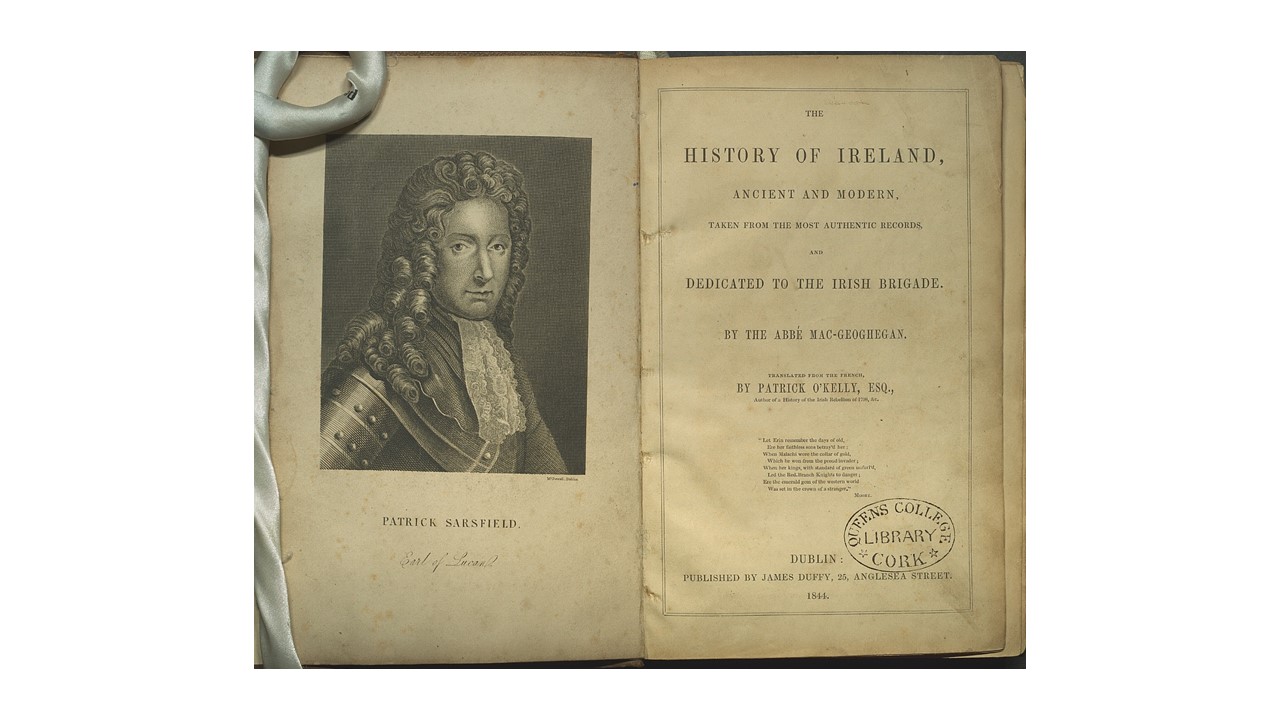 O’Kelly lived in France during the years when he produced his translation of MacGeoghegan, first published in 1831–32. The work was highly influential in shaping nationalist thinking among the Irish in America as well as in Ireland. (DIB)

MacGeoghegan, James. The History of Ireland, Ancient and Modern: Taken from the most Authentic Records, and dedicated to the Irish Brigade. Trans. by Patrick O’Kelly. Dublin: J. Duffy, 1844. [Older Printed Books Collection] 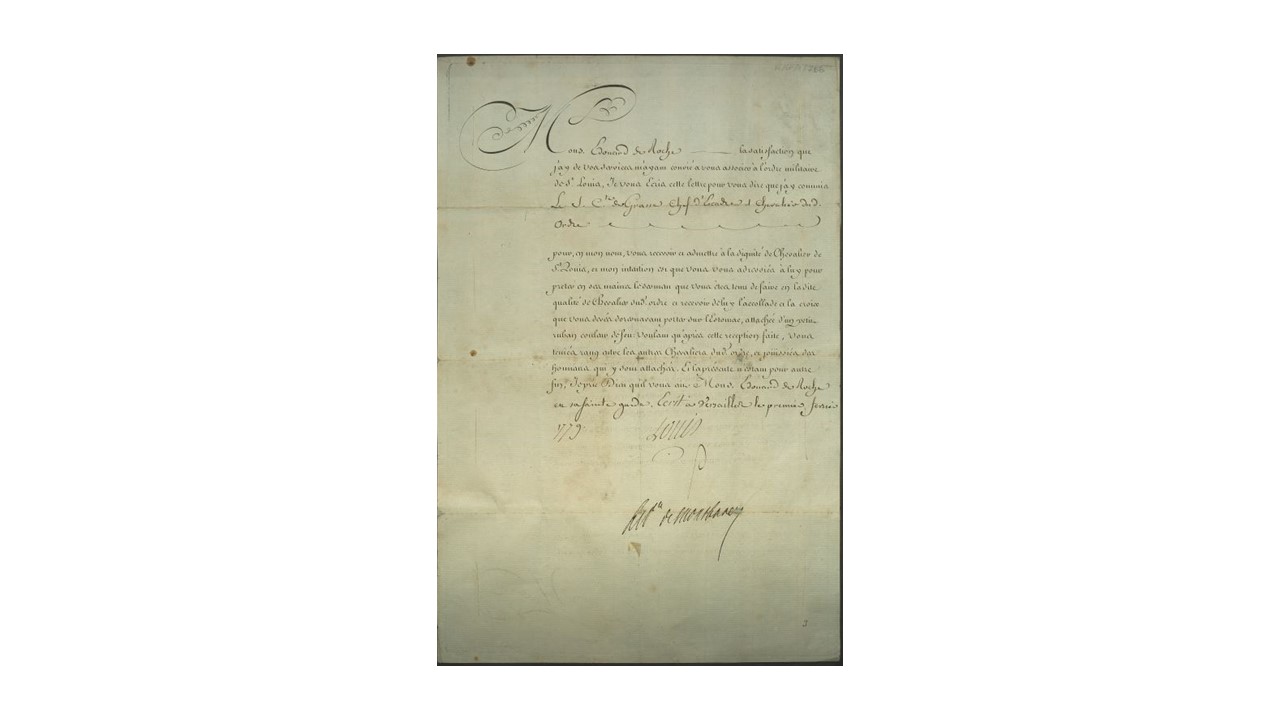 A letter of 1 February 1779 to Edward Roche signed by Louis XVI, conferring on him the honour of Chevalier of the Order of St Louis. The Ryans were Catholic landowners in Tipperary, intermarried with Roches of Limerick. 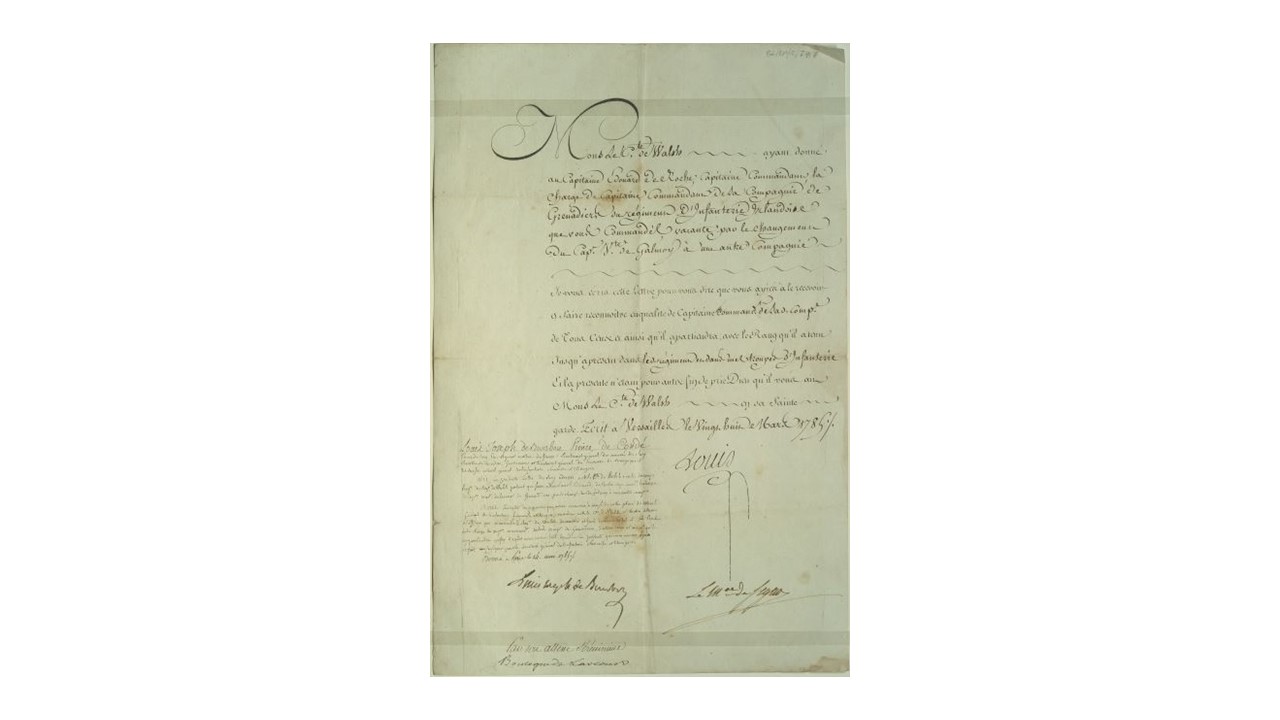 The Infantry of Ireland

An order of 28 March 1785 to M. le Comte de Walsh, signed by Louis XVI, confirming that Captain Edward Roche has been made Commander of the Company of Grenadiers in the regiment of the Infantry of Ireland; with an additional note by Louis-Joseph de Bourbon, Prince de Conde, referring to Roche's appointment.

[The Infantry of Ireland, Ryan of Inch Collection.] 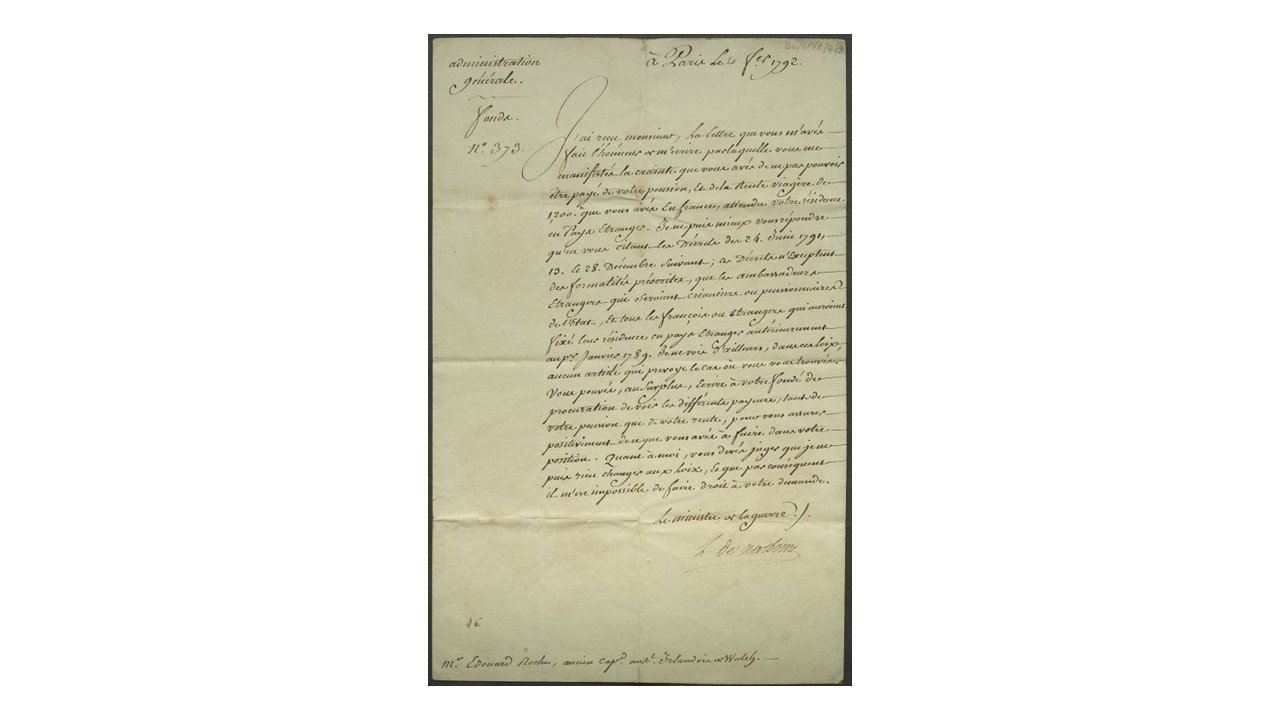 A letter of 20 February 1792 to Captain Edward Roche from Louis-Marie de Narbonne-Lara, Minister of War, replying to his query regarding teh payment of military pensions to persons resident outside France; Narbonne refers to the décret of 24 June 1791 and regrets he cannot modify the law.