In addition, the Archives Service has a number of other collections of interest: 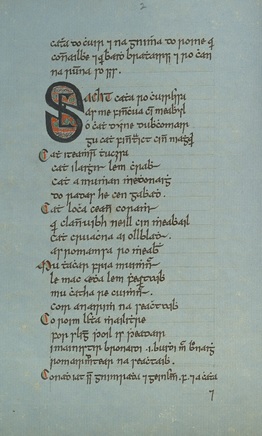 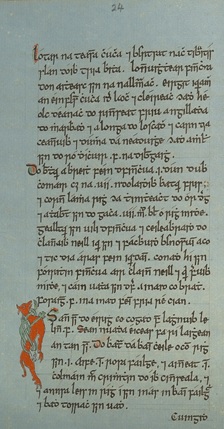 Ls. 90 is part of the Power manuscript collection and was acquired by UCC Library in November 1941. Ls. 90 has two manuscripts bound together: “Beatha Finnchua” or “The Life of St Finchua of Bri-Golbhuinn” and “The Ancient Topography of The Two Fermoys.” Both manuscripts are dual language texts with Irish on the left-hand side page and the English version on the right-hand side page. Seosamh Ó Longáin transcribed “Beatha Finnchua” in 1856 for Fr. Dómhnall Ó Cathasaigh. Throughout “Beatha Finnchua” are lavishly decorated initial letters and animals in the margin (see examples below) “The Ancient Topography of the Two Fermoys” is copied from The Book of Lismore. Seoasamh Ó Longáin also copied this in 1856 for Revd. Daniel Casey. This is also dual-language in the same manner as the previous text but without any of the decorated initial letters or animals. For more about the Ó Longáin family read this blog post.